Coming out of Soddì, I go through Zuri again, which today is fully part of the 30th day, in the territory of Ghilarza. Another short ride, and I start noticing the increasing traffic. I pass over the motorway 131 DCN above, which now seems to me a real barrier, an intruder who I scrutinize from above as if it were a river in flood.

I enter in Ghilarza. A shopping center, supermarkets and warehouses of various activities give the sense of the polarizing center of these areas. The truth is that in these last days I have already come to Ghilarza three times by car, to buy a phone card and as a guest in a pizzeria (the only possibility to eat out for some of the villages around the lake).

But getting here by bike is different. More traffic and dangers hence I am more prudent, like in a city. Without having a specific direction, I cycle straight and I find myself passing next to the beautiful church of San Palmerio, two-colored stones, next to which is the majestic Aragonese Tower.

Upon arrival at the Town Hall, I meet the Councillors Giovanni Antonio and Sergio, who accompany me for a walk in the historic center. The houses are all very well kept, built with basaltic stones carefully carved by the ancient stonemasons of Ghilarza (very few remain today).

Not only the main stones are well carved, but also all the details of the facades, the edges of the doors and windows, often adorned with refined sculptures. Compulsory visit to the House Museum of Antonio Gramsci. I am guided through the rooms, deliberately deprived of the furnishings, containing only objects closely related to Gramsci’s work.

Before lunch I have been invited, for the third time since the journey began, to talk about my project to some elementary school children. Once again a great success and the questions are always interesting and sometimes bizarre!

After lunch it is the (now customary) moment of the countryside churches. We go out in the countryside around Ghilarza by car, we return towards Lake Omodeo, first to the small church of San Michele, and then, almost by contrast in size, to the novenary of San Serafino, almost a small town made of muristenes surrounding the church, some real villas.

In one of these there is a ‘snack’, which in Sardinia means a big lunch that can last until dinner time! They offer us wine and cake but we manage to vanish before the dreaded ‘ammazzacaffè‘, strong local liquors.

The evening ends at the Festa Solidale, a fundraising event for the purchase of a minibus for the children of a school in Peru. The atmosphere is warm, there is a lot of people, and live music. I join in. I play with the organettist Pierpaolo Vacca from Ovodda, of whom I have already heard a lot about during my journey. We improvise a few tunes, then together we join the group to play a bit of rock … what else could be in a ‘metropolis’?

Inspired by the feeling of being in a ‘metropolis’. 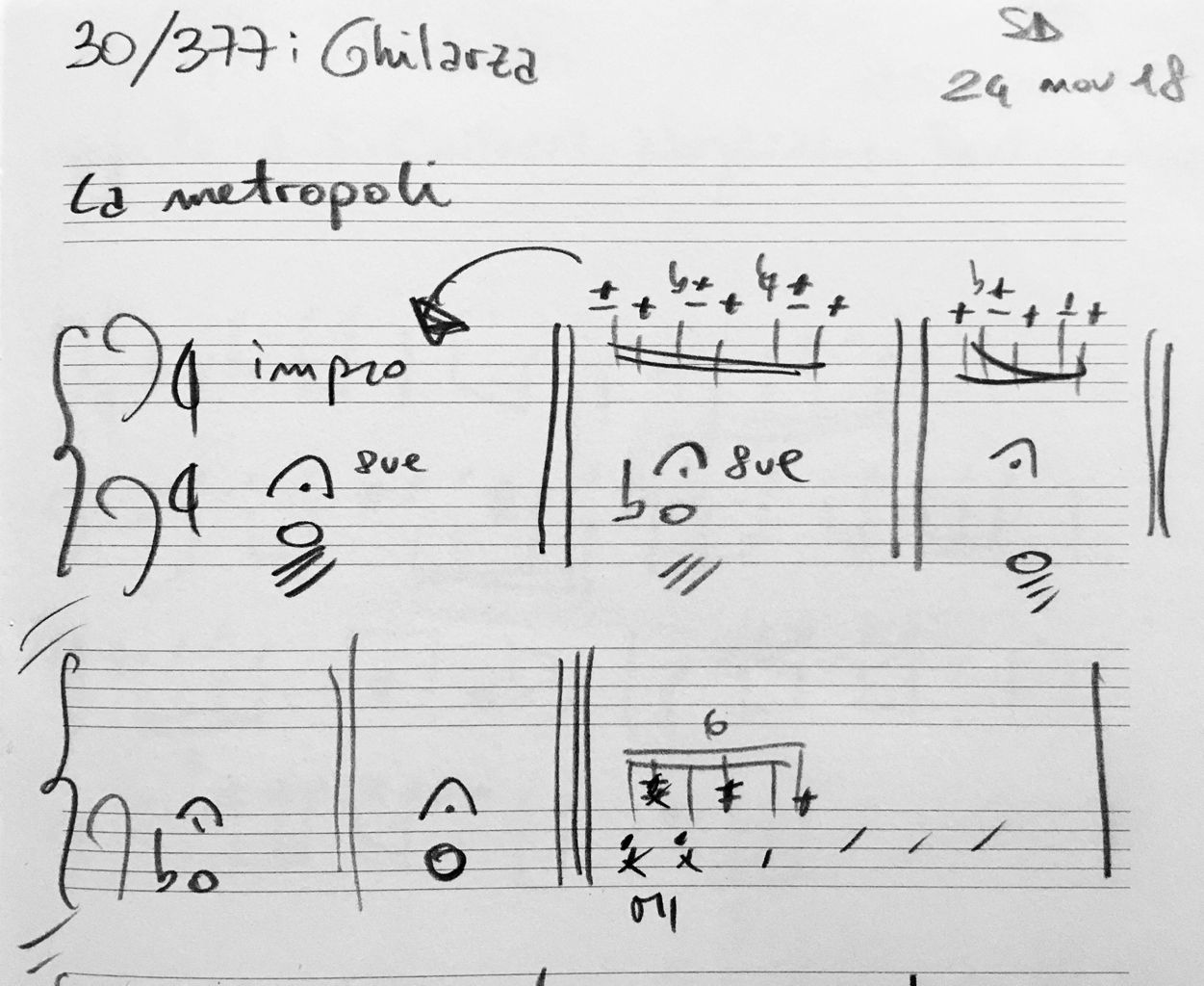 Meetings and re-meetings. This journey is full of meetings, random, casual, organized, special. It is difficult to keep in mind all the names of the people who daily revolve around my project. Sometimes ten a day to remember. So I already have about 300 in my head.

Easy as long as there is Facebook to refresh your memory. The problem can arise with re-meetings. I often recognize faces already seen on this journey but do not remember names or even situation in which we met, and this is embarrassing. For example, this sketch has already happened several times:

‘Ahah how come you don’t remember, we had lunch together in [village name]’

… which inevitably I will forget again after 5 minutes ….

Here in Ghilarza (remember, an attractive center of the surrounding villages) many are the re-meetings:

2 Serafino, who stops on his motorbike when he sees me unloading the bike at Enrico’s bnb (who I met yesterday on the way to Soddì), high school teacher, also met in Neoneli;

3 Nanni from Boroneddu, with his wife and daughter passing by me in the car when I arrive at the Town Hall, and stop to greet me;

4 Luciana and Anna, come to the Festa Solidale from Boroneddu specifically to see me play;

5 Gianluigi, also at the Festa Solidale … who I’ve already seen twice by chance, I forgot the first time (there we go), and once in the cafe in Sorradile.

6 [I still do not remember the name] of the guy from Bikin’Gavoi … if you read, please write me!

7 Piera … who guided me to the Museum in Sorradile;

8 Rita from Bauladu but she lives in Cagliari…she says she was at my graduation in Geology in 1998…what??

9 Andrea from Cagliari … who rushes to greet me as soon as he hears the announcement of the third prize winner of the raffle at the Festa Solidale … ‘and the winner of the sausages is … SEBASTIANO DESSANAY!’