Today the African heatwave has returned. Going up to Cuglieri is a challenge! But the view of the plain below is beautiful, as well as that of the town that is approaching, with its imposing church, visible from the past few days on the top of the mountain.

I arrive at the house of Alessio and Laura, who will host me, together with their 5-year-old daughters Adele and Paola of 9. Alessio is at work in Bosa, he sells underwear, and in my day there he sponsored me a new set of underwear! However, his friend Antonello arrives, an expert on the history and places of Cuglieri. He will take me around this morning.

We get in the car and we go through the cobbled streets of the historic center of Cuglieri. Antonello begins to tell me how the town was born, it is said to have been founded by the ancient inhabitants of Gurulis Ventus, the village where Padria now stands, destroyed by floods and landslides. Here they founded Gurulis Nova as they found an environment similar to their three hills. But archaeological and historical traces suggest that this area was already inhabited.

We pass in the historic district of Crabola, the first nucleus, skirting some of the many churches here, Santa Silvana, Santa Maria delle Grazie and the nearby convent of the Servi di Maria, then the imposing seminary building, up to the church of Sant ‘Antioco from where you can enjoy the view over the entire valley below, S’Adde as it is called here.

From here we head to the outskirts of the village, to the Tiu Memmere springs, on the road that leads to the castle of Montiferru, visible in the distance on a rocky peak. According to the legend, which I found in many other villages, drinking the waters of these sources would make you lose your memory, or become stupid. The interesting thing is the fact a procession arrives here from the church of San Giovanni, with people parading by the side of the road in silence, to leave the souls of the dead quiet in the center. This religious rite intersects with the oldest pagan rite of S’Abba Muda, where people used to go to this source of water to bathe and drink in silence.

Antonello and I wet our hands and drink the cold waters of the fountain, and sit in the shade to find some refreshment from the summer heatwave. Antonello begins to tell me ancient stories, of churches built on fountains, of water, of lunar cults, of three no longer existing churches that form the geometry of a sacred triangle. And then he speaks of an ancient oracle that was to reside in this area, rich in water, rocks, and where the god Apollo is embodied in Christianity by Saint John. Here in the shade a strange mystical aura is created.

We leave this place to head to Colle Bardosu, also called “of the guard” for the view that dominates the whole territory. Here is the imposing Basilica of Santa Maria della Neve, visible from all the surrounding area. The interior is majestic. Various chapels, one of which dedicated to Santo Paolo Perria and near the altar Antonello, makes me notice an ancient Templar cross. A video shows the cantores who sing ‘a cuncordu’ during the rites of Holy Week.

I arrived on the north slopes of Montiferru, which I have already touched in my stops in Santu Lussurgiu, Bonarcado and Seneghe and where I have already found ample evidence of this type of singing. Next to the Basilica is the beautiful monumental cemetery, where we enter and where Antonello offers a greeting to his grandparents buried here. The last stop of the morning is in the countryside of S’Adde, the valley, to see a beautiful millennial olive tree. Once again we find a slight refreshment to this hellish day.

Antonello takes me back to lunch with Alessio and Laura and leaves. We eat light in anticipation of the visit to the coastal part of this town and of one or more baths, certainly the last of this trip, as Cuglieri is the last town that remains for me that has territory on the coast.

Alessio and I get in the car. The first stop of the afternoon is on the last offshoot of Is Arenas beach, mostly in the Narbolia area, kilometers of clean sand and where tourism has not taken over. From here I can also see the promontory of Capu Mannu, behind which are the beaches of San Vero Milis, my first arrival at the sea, which now seems so distant in time, on December 4, 2018.

From here we move to the white promontory of Torre del Pozzo (tower of the well), so called for the presence of a natural chasm in the rock. Alessio tells me that in the days of strong mistral the water is pushed up this chasm, resembling a geiser. From the point we can see the whole coast, dominated by these white limestone, which people here erroneously call ‘su tufu’, tuff, the stone that was quarried nearby and squared into blocks to build houses.

Finally we move to the iconic S’Archittu, an arch carved into the rock. All around and above, a swarm of kids diving into the crystal clear water. Alessio and I stop at the next beach for a nice refreshing swim. From here we then climb over the arch and I can walk along the white esplanade, where the final scene of the recent Sardinian film ‘The man who bought the moon’ by Paolo Zucca was shot.

It is late, we go back to Cuglieri for a last tour in the centre to take some pictures of glimpses and historic buildings, and then for dinner. But the day, very long, is not over yet! Alessio in fact takes me to his basement, where he builds ukuleles with the particularity that the bodies are old ‘vintage’ cigar boxes. Particular models that proudly makes me see and try. With us also his daughter Paola, 9 years old. 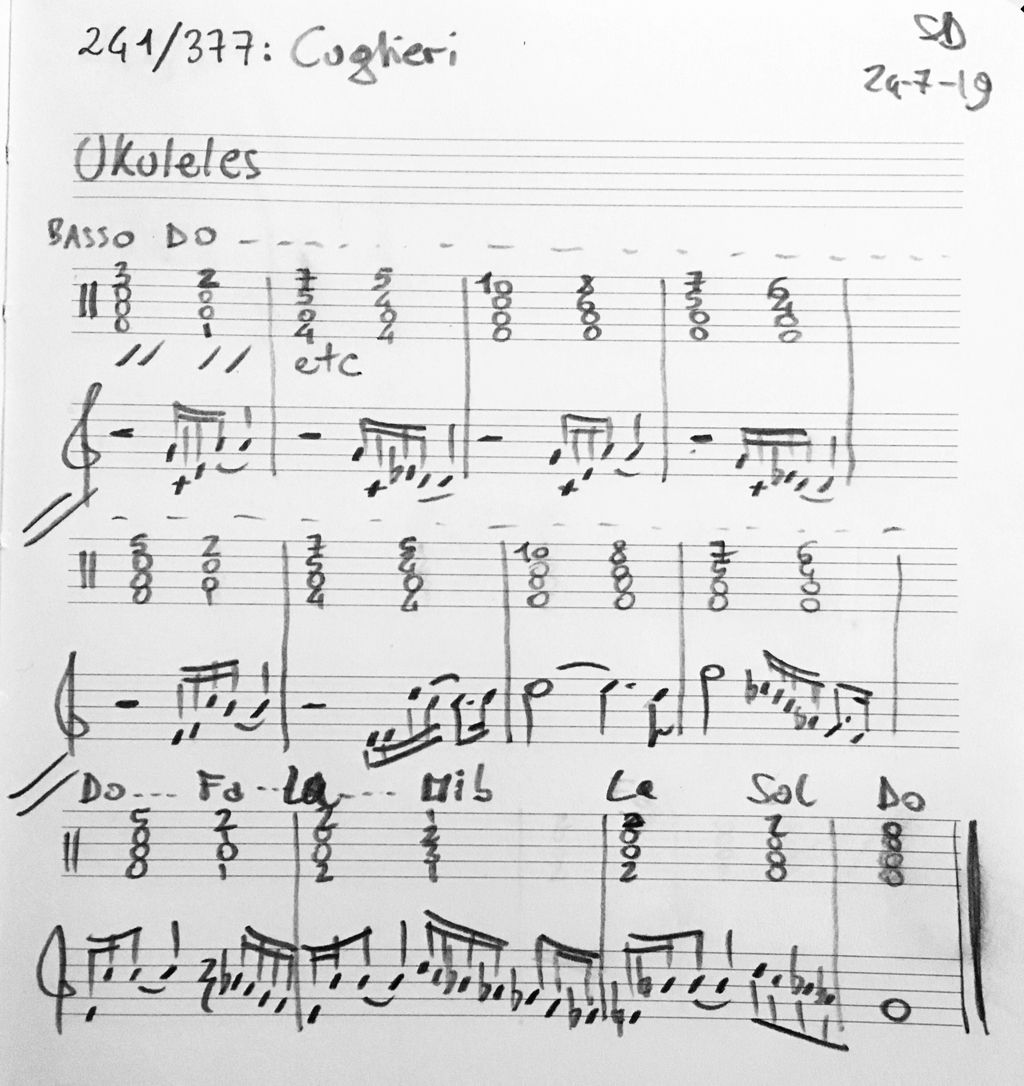 So the evening is still long! With Paola we take the ukuleles and we launch into a real jam session. I teach her two chords first, and we play a song, then I sense her good musical skills and I teach her two more chords so that we can play another couple of songs! Paola learns quickly! And when I tell her that she has a good memory she says: “Better to remember than to forget”.

In addition to Paola, there are another couple of characters from Cuglieri that are worth talking about. Let’s start with Elisabetta Sias, who participated in some Garibaldine campaigns as a nurse, and it is said that it was her who removed a bullet from Garibaldi’s leg. At her death she was buried in Santa Caterina di Pittinuri.

Then there is Father Giovanni Battista Sanna, a Jesuit, who at the end of the seventeenth century, after having lived first in Iglesias and then in Cagliari, went to Latin America, to Quito in Ecuador, then to La Reduccion in the middle of the Amazon to protect the Indians. For this he was arrested and transferred to Lisbon. He would then go to Faifo (today’s Hội An) in Vietnam, where he would become a doctor of the imperial family. But being a Jesuit would also cause problems there, and he would spend two years in prison in China. Returning to Faifo he would die there, where his burial was found in the gardens of the Cathedral of Hội An.