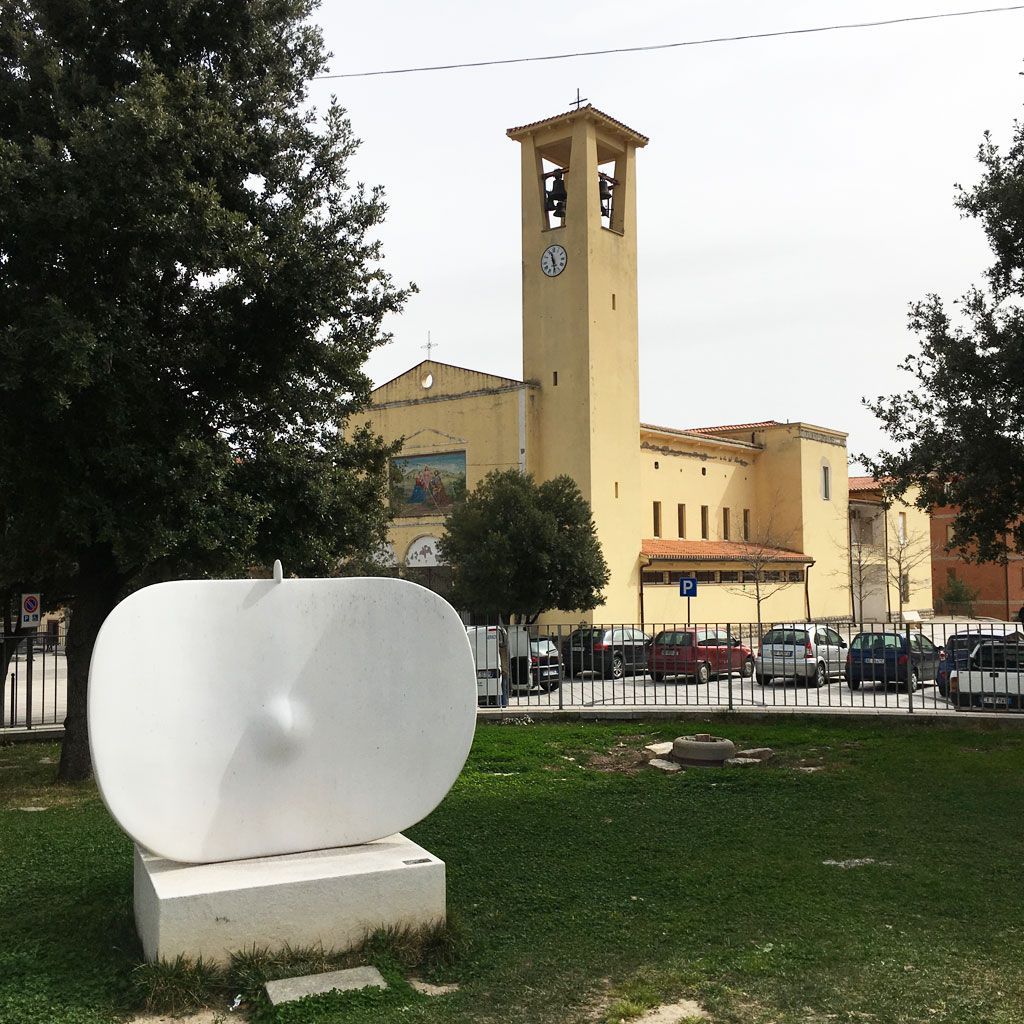 I wake up to the view of the Rio Pardu valley, I turn around and the limestone walls tower behind. The coast is veiled by fog. I head towards Osini without my luggage. The road is very short, all downhill, along the road are high walls whose rocks seem to fall into the street.

I immediately arrive in Osini, take a photo of the entry sign and the Town Hall. In the square opposite the Town Hall there’s a beautiful white sculpture by Costantino Nivola, next to the church of San Giuseppe, and a beautiful vantage point from which you can see the valley and Gairo on the other side. Walking around the streets I immediately realise that Osini is a new village. It was born after 1951, when the old village was destroyed by a flood. 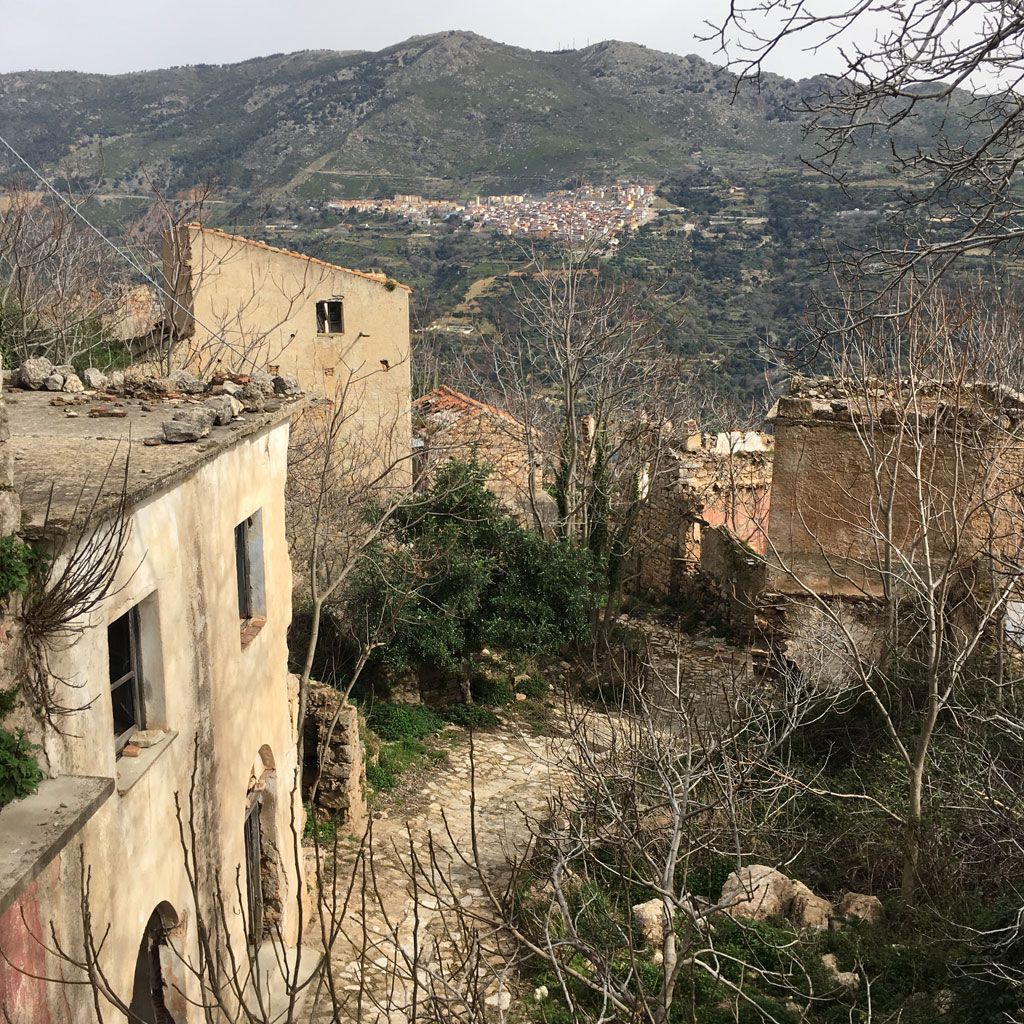 I continue cycling and go to visit Osini Vecchio. It is not far and after a few bends I start to see the remains of the houses. The main road passes in the middle, but taking a small road to the right I go down into the lower part and take what once must have been the high street of the old town. There’s a writing saying Usini on the remaining wall of the first house. Many ruins remain, here and there, giving a sense of desolation. I move in the upper part of the old town, where the old church of Santa Susanna remains, but it was destroyed by the flood and then rebuilt. 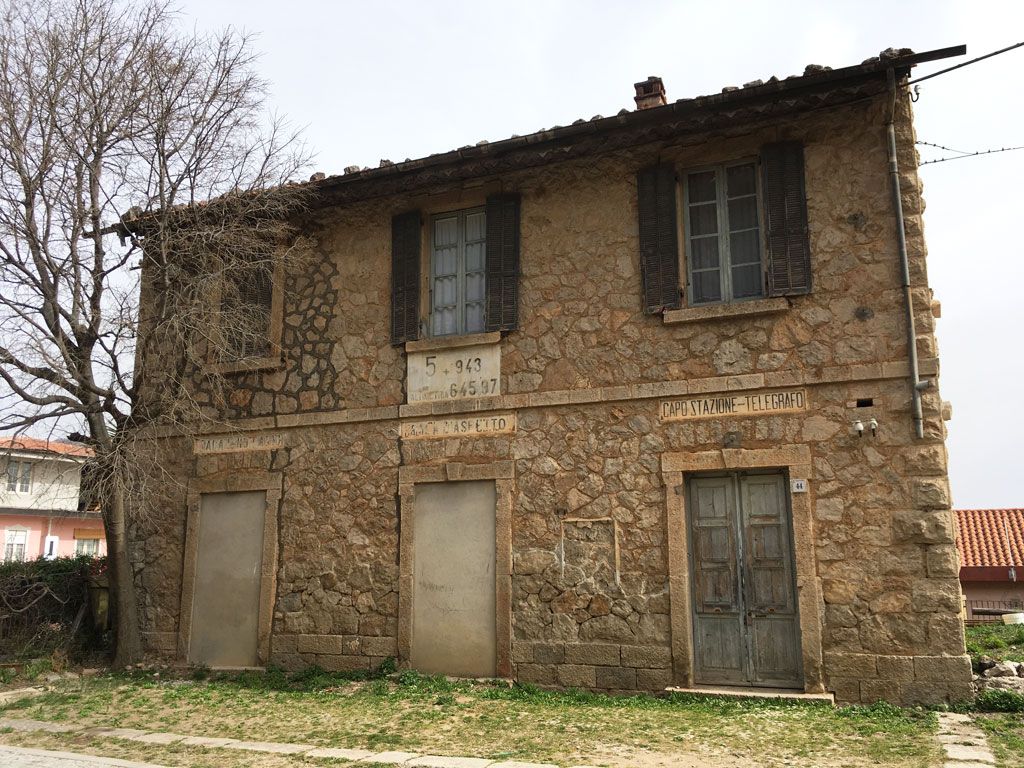 From here I take a path that goes up to the rural church of San Giorgio, around which a shepherd grazes his goats. I take the road that follows the path of the old railway and which returns to the new Osini. Here, among the popular modern houses, I arrive at the block of the old train station of Usini-Ulassai. At one time, in fact, this one served the two villages and was located about halfway.

I go back to Ulassai temporarily. From here I will move with Simone, owner of Sardina E-motion, who will take me on a mountain bike (with assisted pedaling!) around the Osini territory. We start from the Ulassai center and go up the hill that leads to the Su Marmuri Caves. From here on, the climb becomes arduous, and I savor the benefits of assisted pedaling!

We cross beautiful holm oak woods and we are right on the top of the limestone plateau. After crossing part of the territory of Ulassai we enter the Osini area and arrive at the Urceni Fountain, where we quench our thirst and fill our water bottles. Not far away is the Urceni nuraghe, well preserved and all in white Mesozoic limestone, the same as the Tacchi. From above the nuraghe the view is formidable, to the south you can see Punta Serpeddì beyond the Gerrei. 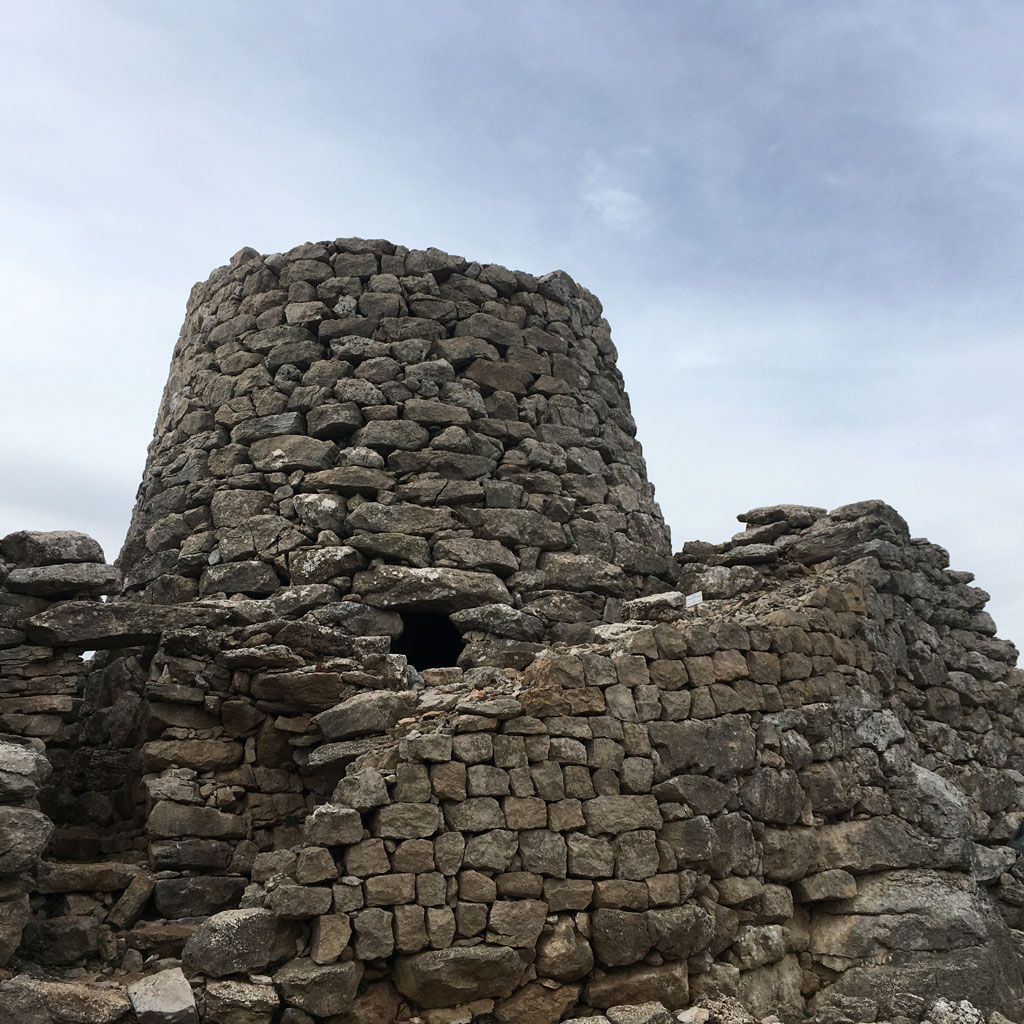 We continue and arrive at the edge of the plateau. I have to stop and enjoy the incredible view, this time to the north-west, the Gennargentu, with some snowy parts. Below us, an impressive valley bordered by limestone walls. We do a last stretch of hard climb even with the assisted pedaling and we arrive at the Serbissi nuraghe where Giorgio and Antonella of the Archeo Taccu association are waiting for a guided tour. The nuraghe is imposing, well preserved, with several towers around the main one. We pass in the corridors, and from the central tower we climb the steps to reach the top. Despite the strong wind I stay a bit to contemplate the crazy view.

At the end of the visit to the nuraghe, following a path that descends, we arrive at the entrance of a cave, where pre-Nuraghic archaeological remains were found. The cavity passes right below the nuraghe and we walk along it, going out on the other side of the limestone relief on which the nuraghe rises. On the way back we load the bicycles on Giorgio’s vehicle. We pass through the Scala di San Giorgio, an impressive split between the limestones in which the road winds, which turns back towards Osini. 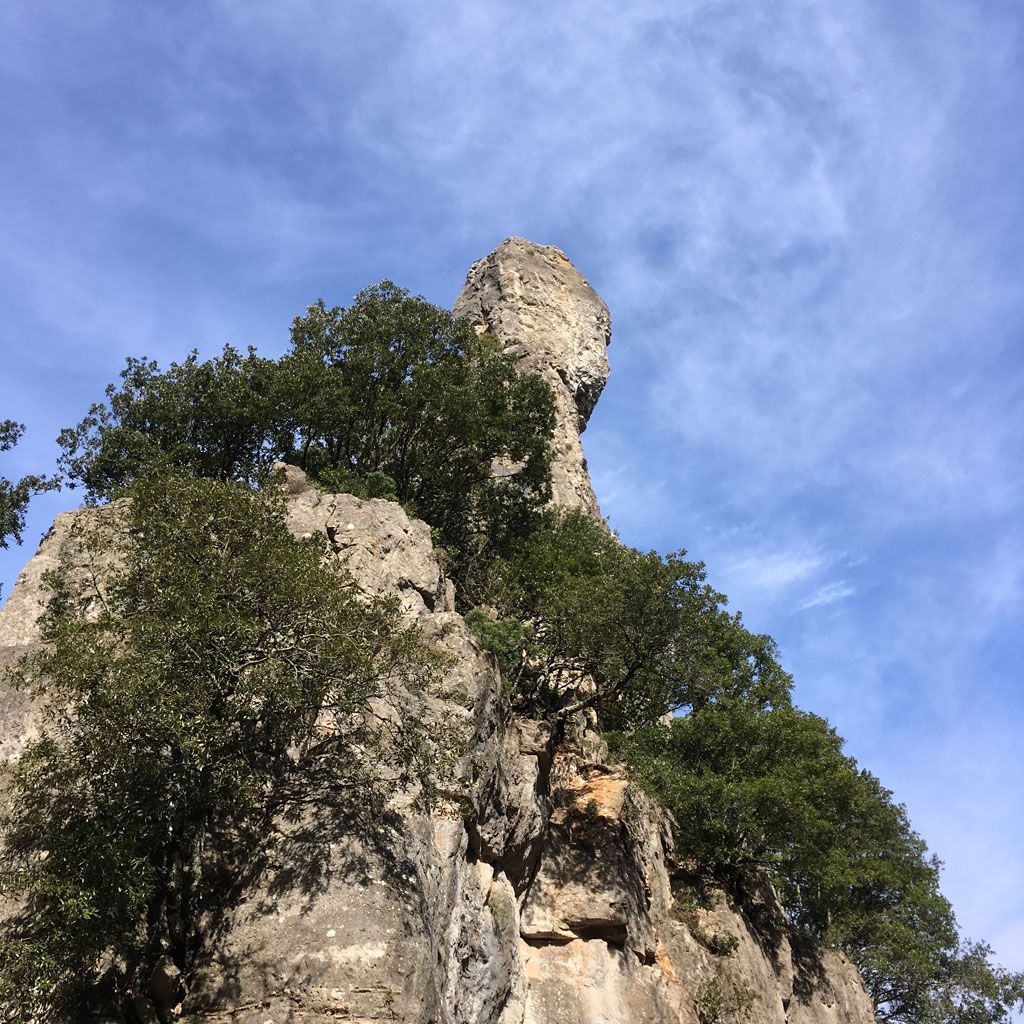 After loading my bike and luggage in Simone’s van, we head to my accommodation for tonight, the Hotel Scala di San Giorgio, where the owner Roberto and his friend Daniele are waiting for me. We spend a beautiful evening, also in the company of Annalisa, Simone’s partner, and little Gaia, Roberto’s daughter, in a fantastic location, immersed in the woods and among the rocks, where the phones don’t have signal, and the only sounds are those of the surrounding nature and our chatter! 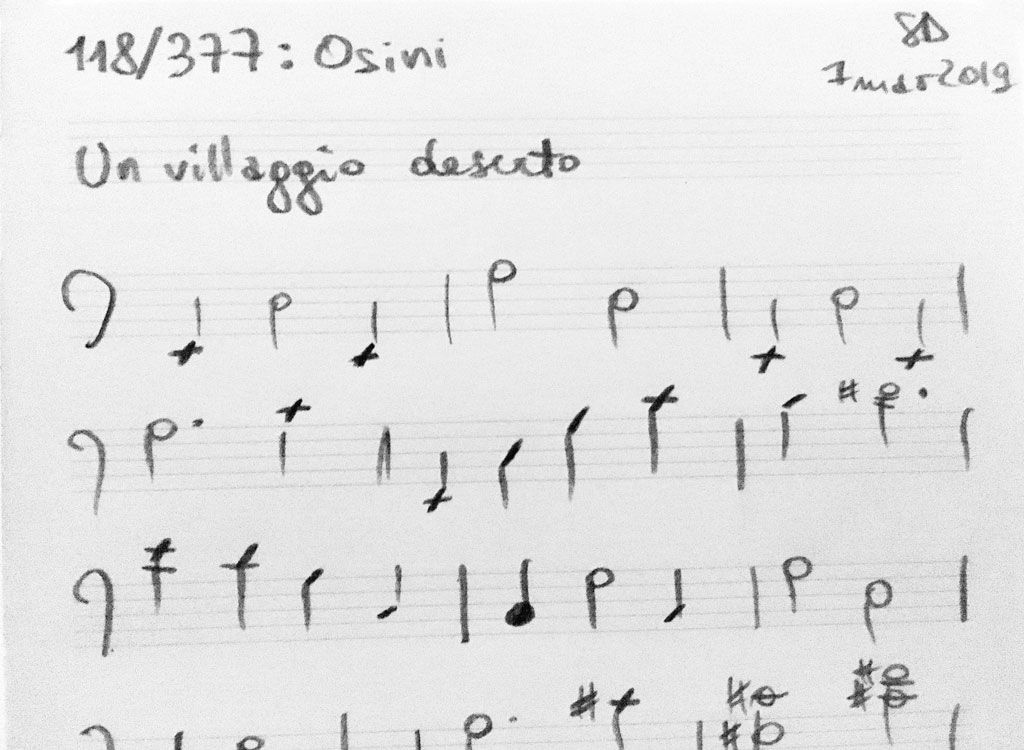 In 2018, the XXVII edition of the Rocce Rosse Blues Festival was held in Osini. The festival was historically held in Arbatax, a hamlet of Tortolì, and took the name from the famous red rocks. But “perhaps not everyone knows that” (like that column of the Enigmatic Week Magazine) the association and the festival were born right here in Osini from a citizen passionate about blues music. Arbatax was the most famous location and the one most used by the Festival, but in recent years there have been several municipalities hosting the festival, and lately Osini too… the circle closes!

I remember when, back in 1997, my sister went to see David Bowie in Arbatax and was dazzled by it. But there are many artists who have played on that stage over the years. The last edition has also seen internationally renowned artists who performed in the old village, the Osini Vecchio, abandoned in 1951. But the most awaited guest was a citizen of Osini, the actress Caterina Murino, who played “ Canne al Vento ”, a show based on the text by Grazia Deledda. We just have to wait for the next edition of the Festival to see if the old village will be the setting for one of the most long-lived festivals on the island.