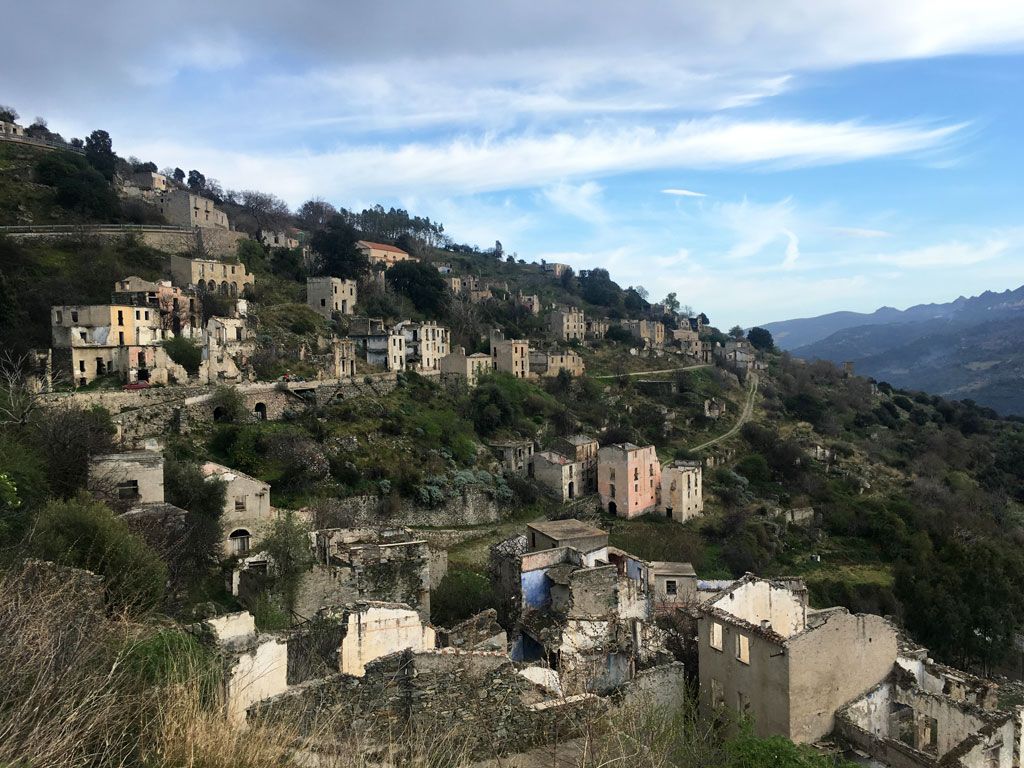 I leave the Hotel Scala of San Giorgio with the dog Kira (adopted by the managers) running after me for a few kilometers. I pedal among the holm oaks and limestones, and after a bad climb I finally arrive at the Scala di San Giorgio, a split between the limestone where the road passes. From here on, the descent to Osini is sickening, steep bends. Once in Osini, I fly downhill, pass Osini Vecchio, down to the bridge over the Pardu river, and from here it is all up again, the climb I saw on the other side of the valley these days and I was afraid of. I pass in the middle of Gairo Vecchio, where they will take me later, and shortly after I enter Gairo Sant’Elena, as the new town is called.

Here the deputy Mayor Sergio receives me, and puts me in the hands of Gianni and Danilo, who will take me around the area, one of the most complicated territory I have encountered so far. Gairo Vecchio was abandoned after the 1951 floods that destroyed it, such as Osini Vecchio, and the inhabitants moved to the current Gairo Sant’Elena. On the other side of the valley then, about ten kilometers away, there is the hamlet of Gairo Taquisara (Italianisation of Taccu Isara), built by Mussolini and called first Gairo Littorio, or Gairo Scalo for the presence of the railway station. On the coast, on the other side of Monte Ferru that separates it from Tertenia, is the Marina di Gairo, with the beaches of Su Sirboni and Coccorrocci. 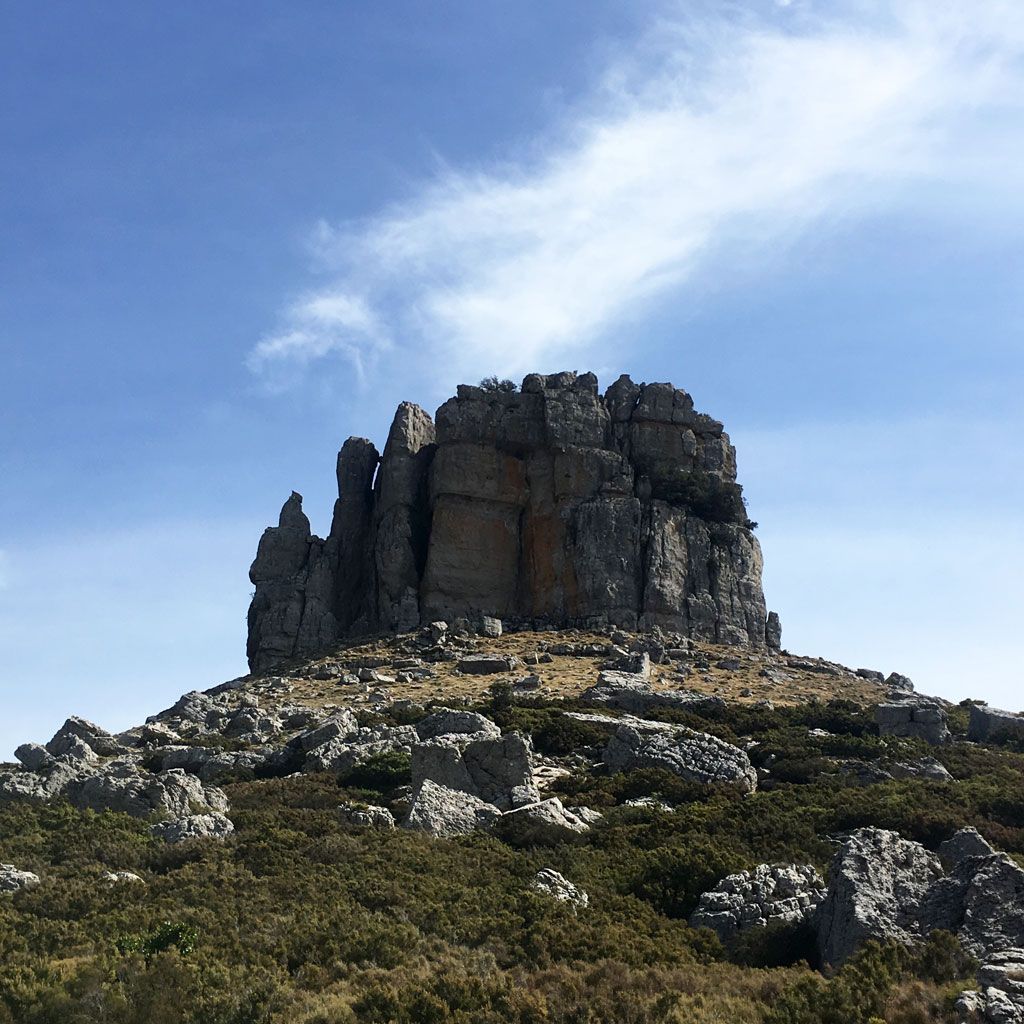 By car we cross the entire schist side of the Rio Pardu valley, which is also very landslide prone due to the presence of clay layers, and then a pine reforestation area, which in the past provided wood for the production of cellulose at the Arbatax paper mill. From here you can see the Ferdinando Cliumi astronomical observatory on the top of the mountain. We continue towards Perda Liana, the most characteristic limestone Tacco (‘heel’) of the whole area, visible from all the surrounding areas, like a tower. They tell me that its name would have been Perd’e Iliana, from the name of the original inhabitants of these areas, the Iliensi. 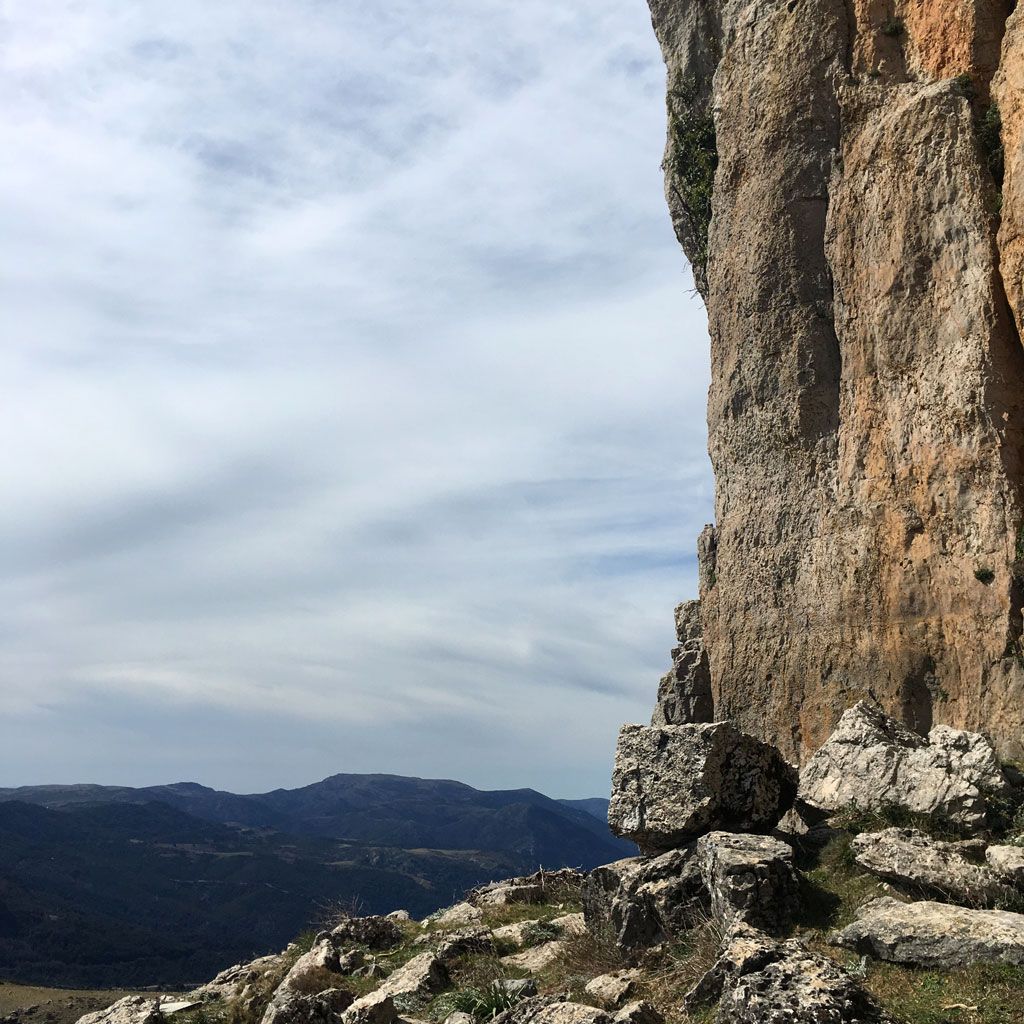 Once the car is parked, we walk along a path among the schists. As we approach, Perda Liana becomes more and more imposing and on the ground begin we find fragments and boulders of limestone collapsed from the top. We walk along the path that runs around it and then we climb up a slope to get right to the base of the gigantic heel. We are at almost 1300 meters of altitude, and despite the coolness of the day, it is definitely spring. The view around is spectacular, up to the Gennargentu mountains with some residual snow. We rummaged among the Mesozoic limestone in search of some fossil, and we find some, fragmented bivalves and gastropods. 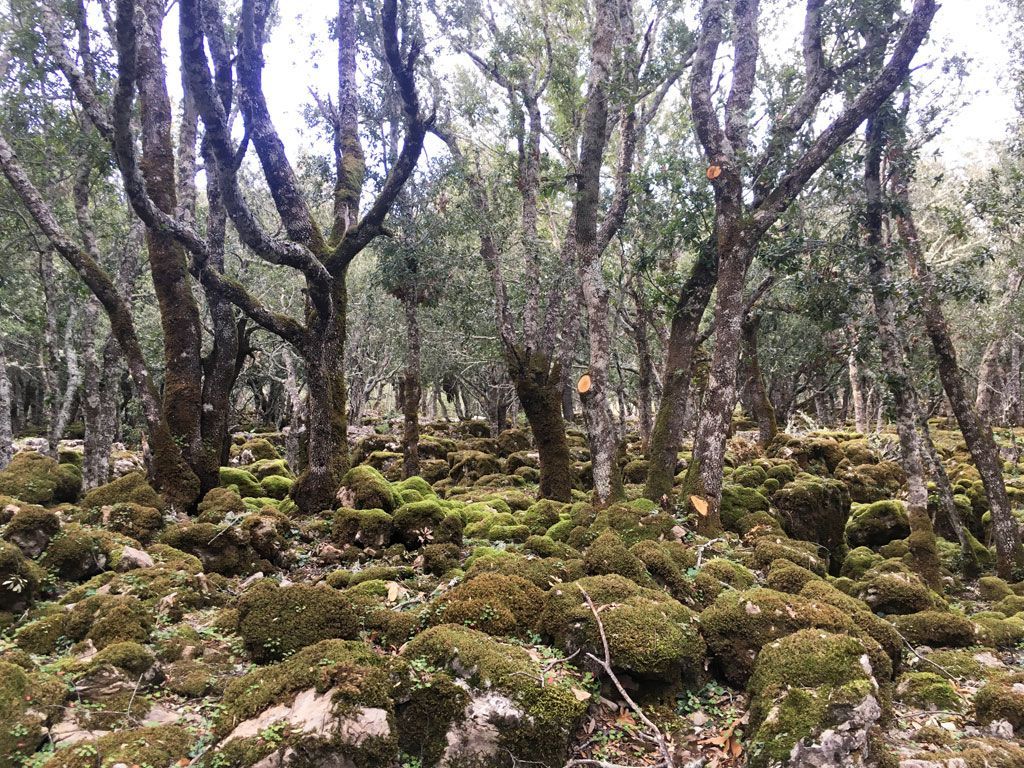 Once back down to the car, we head towards a place called Is Tostoinus, where Matteo is waiting for us in the holm oak forest, where he started a barbecue for lunch. We eat on a stone table next to a typical fin. The cured meat produced by Danilo in Villagrande is exceptional, as is roast beef, and the red wine is excellent, also produced by Danilo. After lunch we walk along the banks of a natural lake where a colony of Greek tortoises lived brought here by the Romans, from which this place takes its name. Not far from here there is a buried nuragic village. The remains of huts are covered with moss and vegetation, but one can guess the enormous size of the village, which includes the rest of a nuraghe. 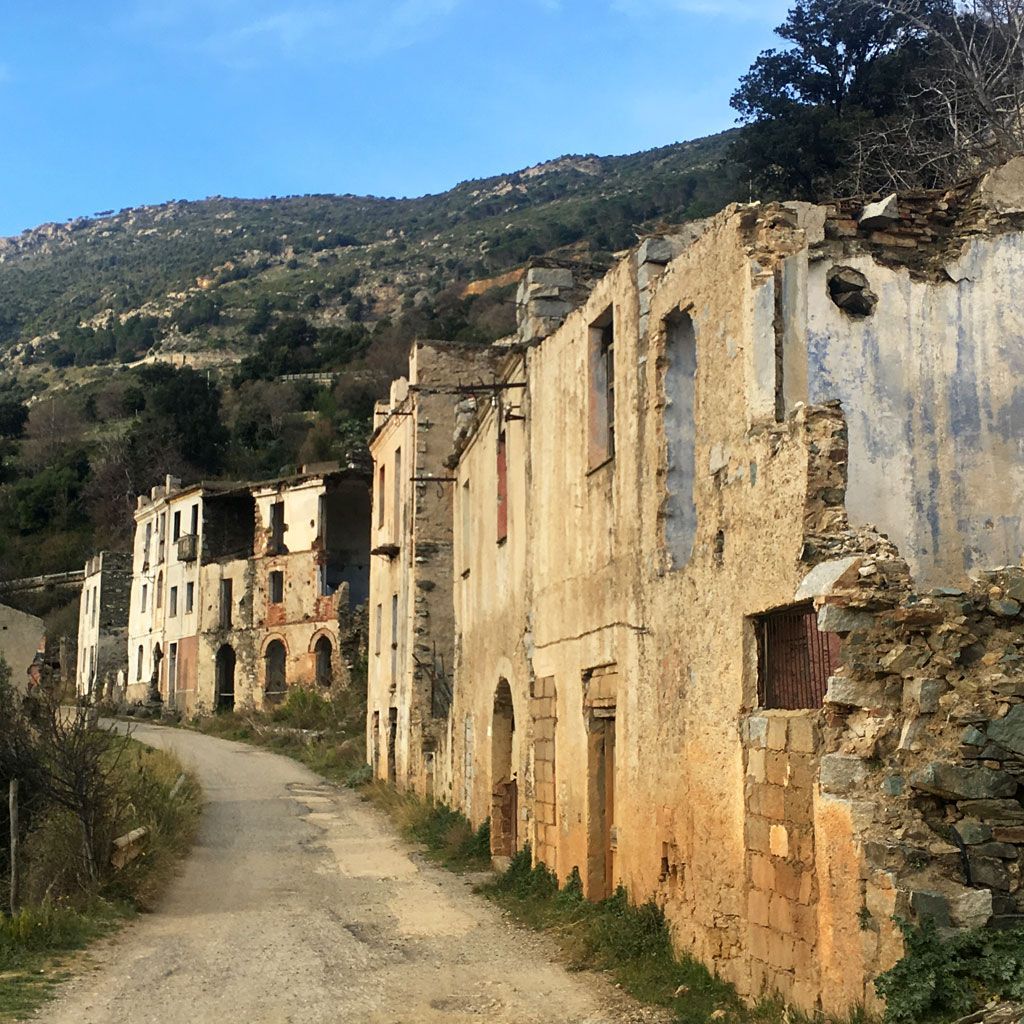 The last stop on this evening is a visit to Gairo Vecchio. Walking in the ruins of the original nucleus of the village is a bit like walking through the ruins of Pompeii. One imagines what life was like here, and mentally reconstructs the missing parts, the population and the scenes of daily life. The size of the village was considerable. Buildings with three floors, many collapsed, many partially in one piece. We enter among the alleys passing from a stairway of beautiful granite, and we find some very suggestive corners, including what was supposed to be the old mill, with the millstones still inside. On some wall of the houses the old ovens remained. Many wrought-iron balconies. Gianni shows us what was the home of his grandparents, where his father was born. Here there were the remains the church of the Holy Spirit, which has been rebuilt completely. Unfortunately, due to the presence of layers of clay and many water sources, the ground is in continuous and very slow movement towards the valley floor, making it impossible to think of rebuilding this ghost place.

After a pizza all together, I, the vice mayor Sergio, Gianni and Matteo (Danilo returned to his village, Villagrande Strisaili where I will be the day after tomorrow), I retire to the bnb Gairu Nou managed by Marisa, who welcomes me and gives me free hospitality. I work for a while before falling from sleep. 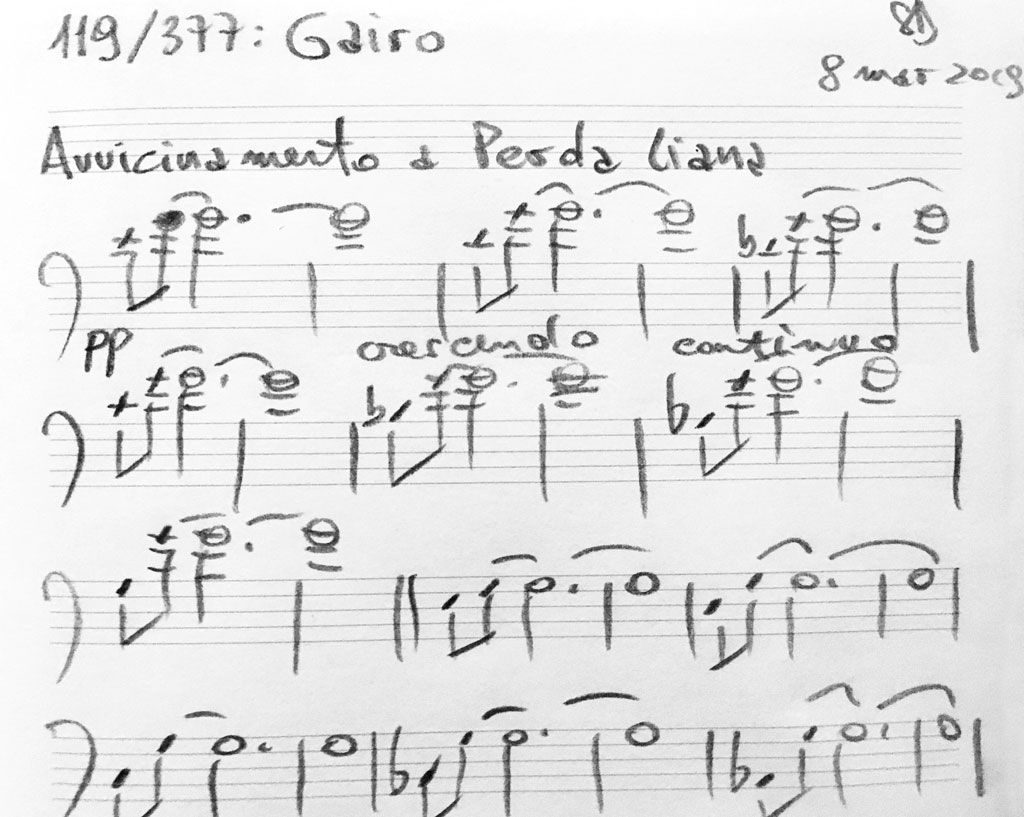 While we return from Gairo Taquisara, and I see the tremendous climb that I will have to do tomorrow, Gianni shows me a rocky cliff beyond the Rio Pardu, Sa Babbaiecca (from ‘babbai’, dad in Sardinian), and tells me its legend. It is said that once the Gairese brought their old fathers here and threw them off the cliff to end their lives.

The custom was then interrupted thanks to the events of a special son. Once he brought his old father to the cliff, he didn’t have the courage to throw him down, so he took him back to the village, but hid him from the population that wouldn’t have accepted this decision.

There was a great drought that year and there were no more seeds to sow. The old father revealed to his son the barn where some seeds were still found and the son was the only one to sow. The following year the Gairesi were starving, and the young man then revealed that he had managed to cultivate the previous year thanks to his father’s advice. From that moment the importance of the elderly and their wisdom and knowledge was understood, and it was decided to end the sad tradition.