After wandering a bit around Capo Mannu, enjoying the beauty of the sea that crashes on the coast of San Vero Milis, I start my trip to Zeddiani. Today about twenty kilometers, the wind has turned direction so I’m still against the wind. The road is straight and quite boring.

When I get to Zeddiani, I stop in front of the Town Hall and I am stopped by a lady, ‘you’re the one who is coming to the elderly center tonight!’. Yes that’s me. At the Town Hall I meet Mayor Claudio and Gianni who take me around the village.

We are lucky, today is the only day of the week when the mill is open, right in front of the Town Hall. Inside a room a mill grinds the grain, shoots it in a sieve where all the parts are separated and different types of flours come out. The ladies bring the bags and they make them fill, there is a long queue!

The ancient houses here are also in ladiri bricks, even if some basalt traces can be seen. A good part, however, are modern buildings. The streets are well maintained and there are some very nice murals. We pass in front of the church of San Pietro and Monte Granatico, a very nice and well-kept structure, inside which there are paintings of Tzia Veronica, a lady who died recently.

We tour the surrounding countryside, mainly rice fields. We approach the Riu Mare Foghe, which is so wide here that some rowing companies had taken it as their stretch of training. I lean out on the pier and contemplate the reeds in front. The river continues towards the pond of Cabras, passing through Baratili San Pietro where I will be tomorrow. We pass next to a craft area and then we return to the village.

In the afternoon we visit a workshop of polystyrene cribs, very beautiful and well-executed in the most minimal details by a group of willing and talented ladies. Every year the most beautiful crib is awarded.

Then we visit the elderly center, where I tell my project to a group of elderly people, mainly women, who offer me cake and drinks. Finally, I can also play with Giansilvio, accordionist, with whom we improvise on Campidanese dances but also on modern music, in front of some good vernaccia wine.

We conclude the day with a pizza diner in the council hall at the Town Hall, with the Mayor, other councillors and members of the Pro Loco. Tablecloths on the tables, beer, wine, chat and paintings by Tzia Veronica behind us.

Improvisation inspired by the vivacity of a Campidanese dance. 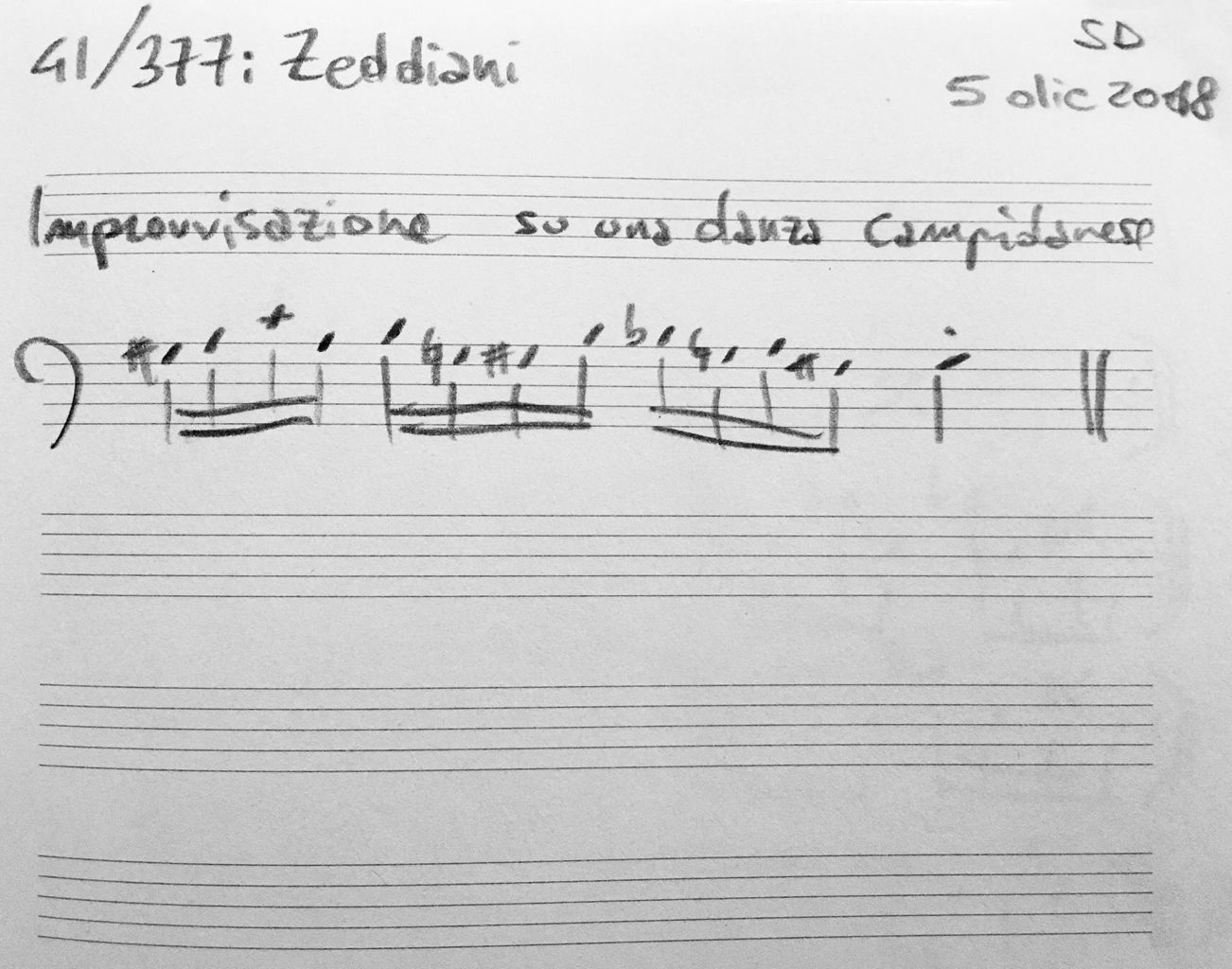 I’ve been at the elderly center for a while already. They announce to me the imminent arrival of the ‘lady of the jokes’. I have just finished playing No Potho Reposare that someone breaks into the hall, Anna Teresa, 82, and I recognize the lady who stopped me this morning in front of the Town Hall.

So I can not stop myself from asking her a few jokes. And Anna Teresa does not need to be asked twice. She starts. An elderly couple is traveling to the Holy Land. The husband has an illness and dies. The woman tries to organize the transport of the body in Italy but someone tells her “why do not you bury him here?” And she “you’re crazy, they told me that once a man who had been buried here resuscitated!”. This is the style of the jokes.

But Anna Teresa also knows some ‘dirty’ ones …and therefore she also starts with those … BEEEEP. Not happy, she then starts with nursery rhymes in Sardinian, and then with stories about people, priests and so on and so forth. I leave with the excuse of an appointment with Giansilvio to play.

At Giansilvio’s we spend time between a Sardinian dance and a glass of vernaccia wine, half an hour has already passed, when someone rings at the door. Giansilvio goes to open the door and I hear two voices, a male and a female that I seem to know. Shortly thereafter Anna Teresa comes into the room with a man I do not know. Anna Teresa continues the interrupted show at the elderly center, jokes and stories.

Until the man timidly presents himself: he is a relative of mine, Gianfranco, whom I never met, who came from Oristano because he read that today I was in Zeddiani. After a walk in the village asking around if anyone had seen me, he stops at the elderly center, where Anna Teresa knows already everything about my moves and takes the trouble to accompany him to us.

The musical evening has now taken another turn, but that’s okay, this journey is made of stories, of many words, of meetings, of re-encounters, and I let myself be carried away by the current of events without resisting it.