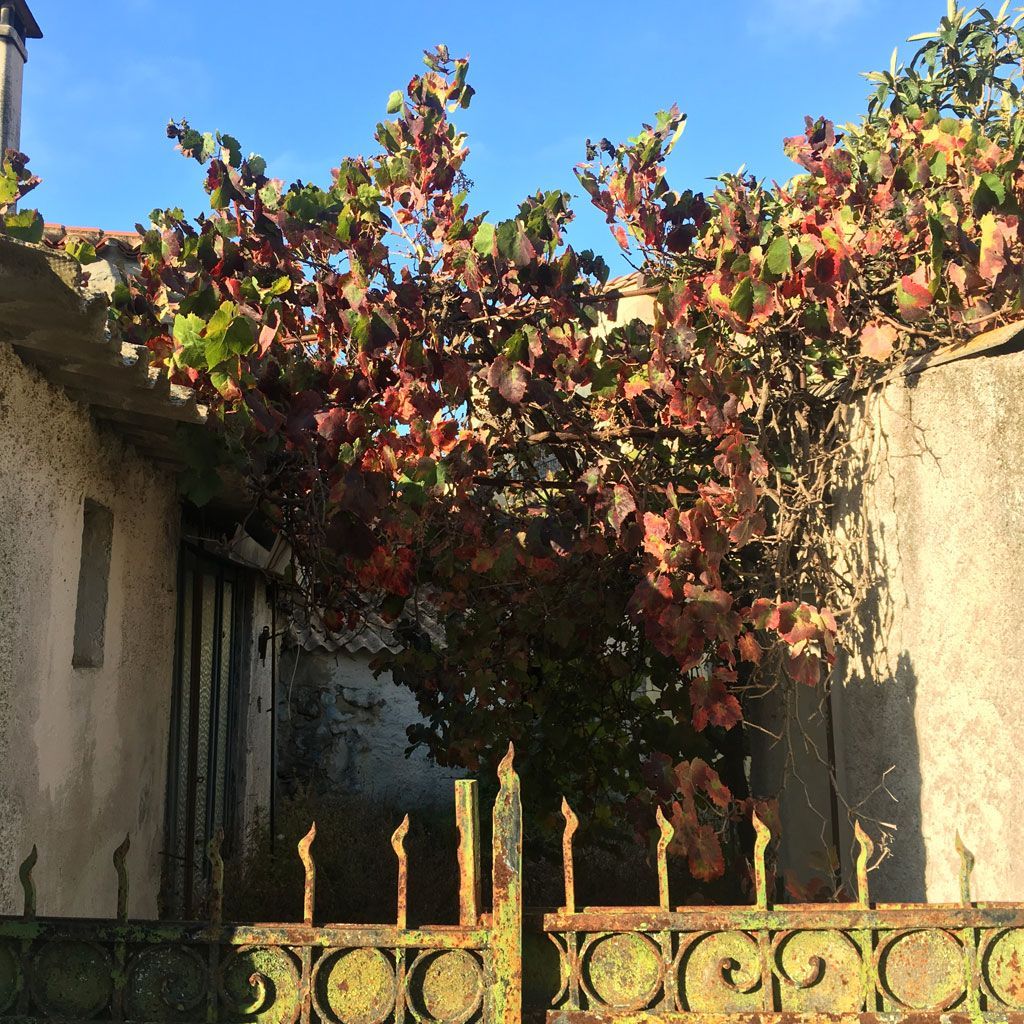 For the first time my health requires me to arrive in the village the day after what I planned. Fortunately, the village is among the smallest in Sardinia and half a day will be enough to visit it, one the same day of Turri (which is also small enough to be visited in the remaining half-day).

I cycle the few kilometers from Genuri, always skirting the Giara di Gesturi (whose top, in order not to offend the usual campanilists, is divided between the municipalities of Gesturi, Genoni, Setzu and Tuili … and therefore each portion should have the corresponding name!), and I arrive at the home of Diego’s mother, the guy who hosted me in my day in San Gavino Monreale, who was born here. I can leave my bike and luggage and go for a walk in the village waiting for Diego to arrive. 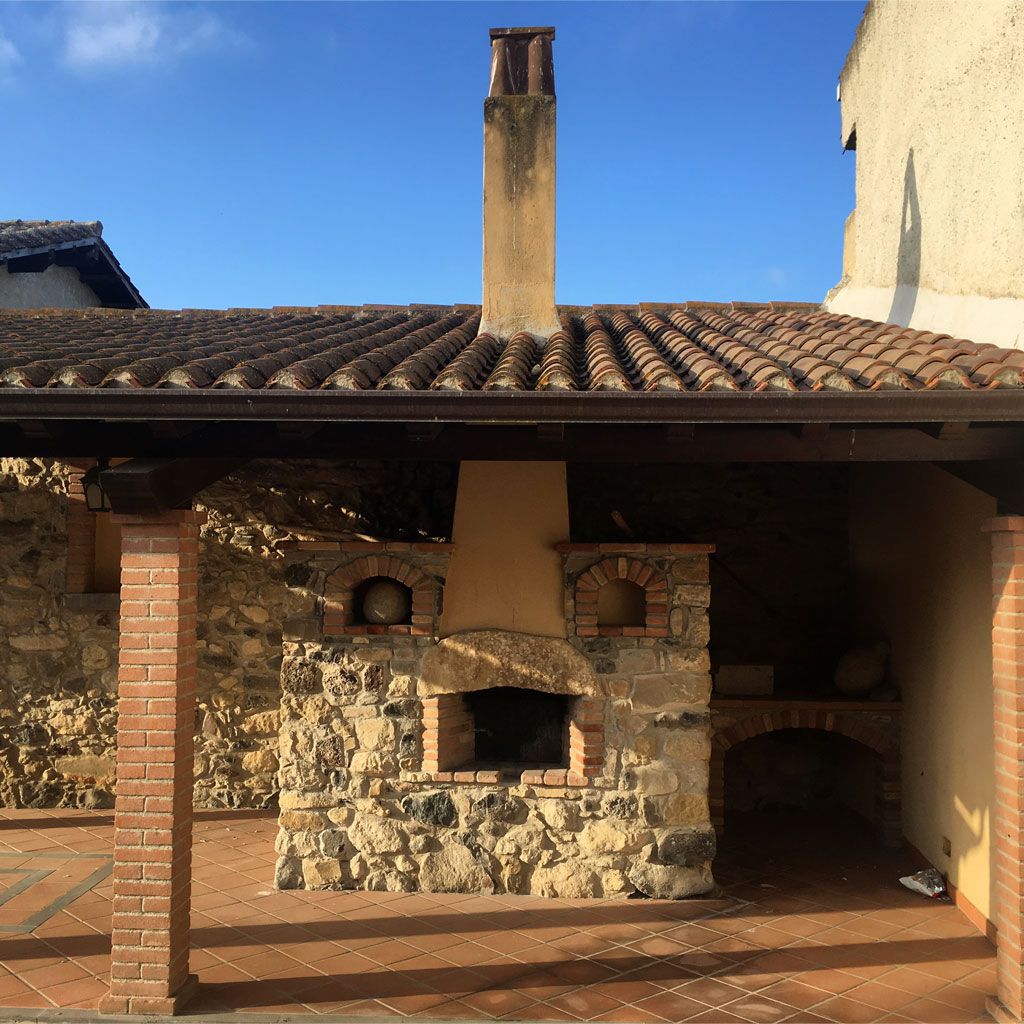 I walk along the main street and immediately ran into a nice, well-restored ancient building, with a bakery for bread on display in the open courtyard on the street. Next to this building is the Filo di Memoria Multimedia Museum, which should contain archaeological finds found in the area, and material that testifies the history of this village, including the usual tools of the agro-pastoral life that I now see by the hundreds in many vilages. The museum is closed (although the indication on Google gives me it should be open) and asking some local passerby I understand that it probably will not open. I continue to the end of the road and arrive at the stairways that lead to the parish church of San Leonardo, originally and old church but rebuilt in the XIX century. 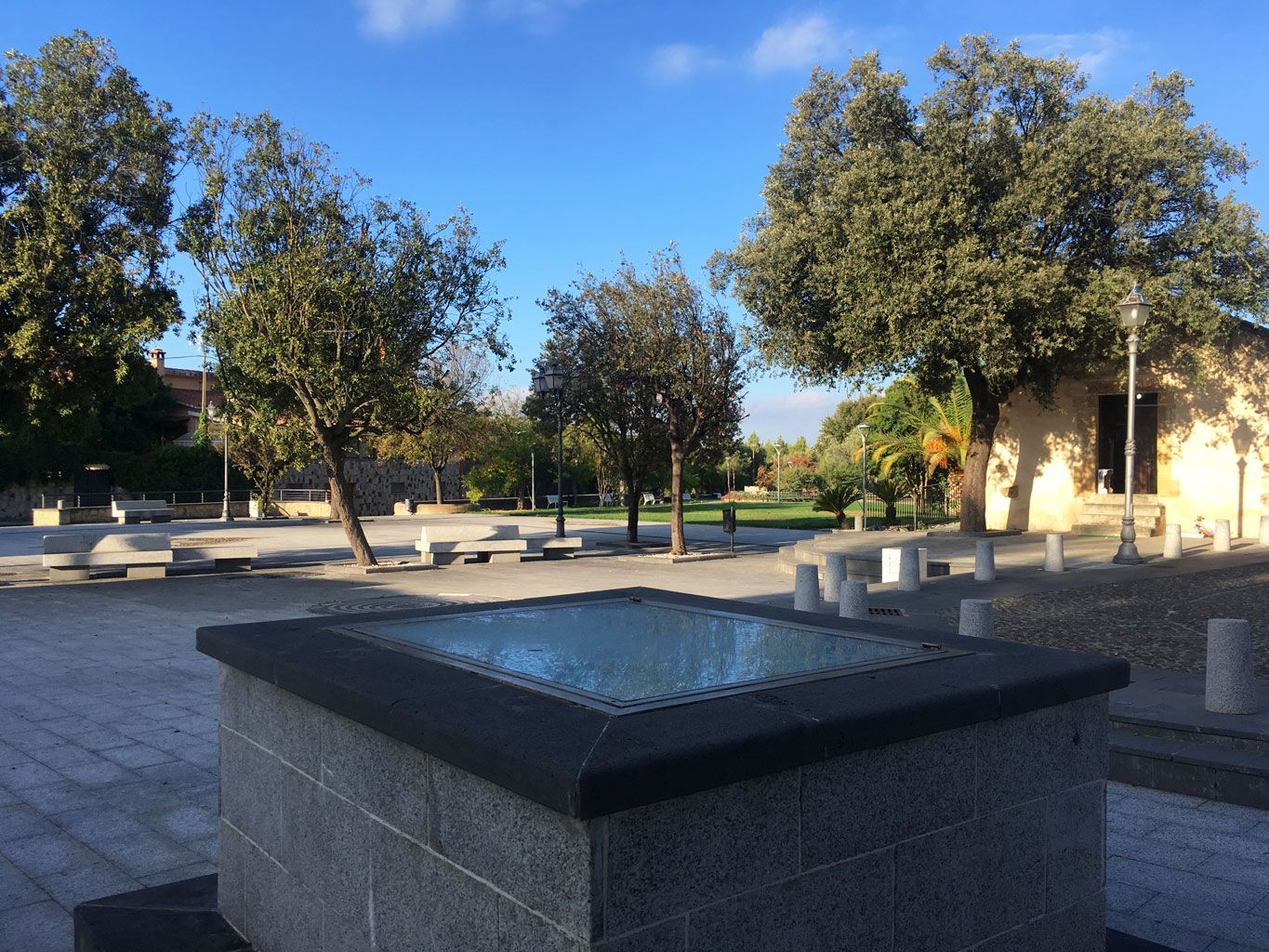 I take a road that goes down to the lower part of the village and I arrive at the modern building that houses the library named after Marcello Marchesi. Unfortunately, it is also closed. So I continue on the peripheral road and go up a lane that leads me to the wide Piazza Angelica, with gardens and benches, and an old renovated water well. The old Monte Granatico (the grain bank) overlooks the square. It’s now a food shop and bakery, at least it has maintained a function similar to the one it had in the past!

After passing the nice five-a-side football pitch, I arrive at the small church of San Cristoforo. I am on the other side of the village that overlooks the now yellowed fields. I enter the courtyard of the church which houses the old monumental cemetery, with dignified tombs with marble tombstones, simple gravestones with wooden crosses, and a small family chapel, all surrounded by cypresses. 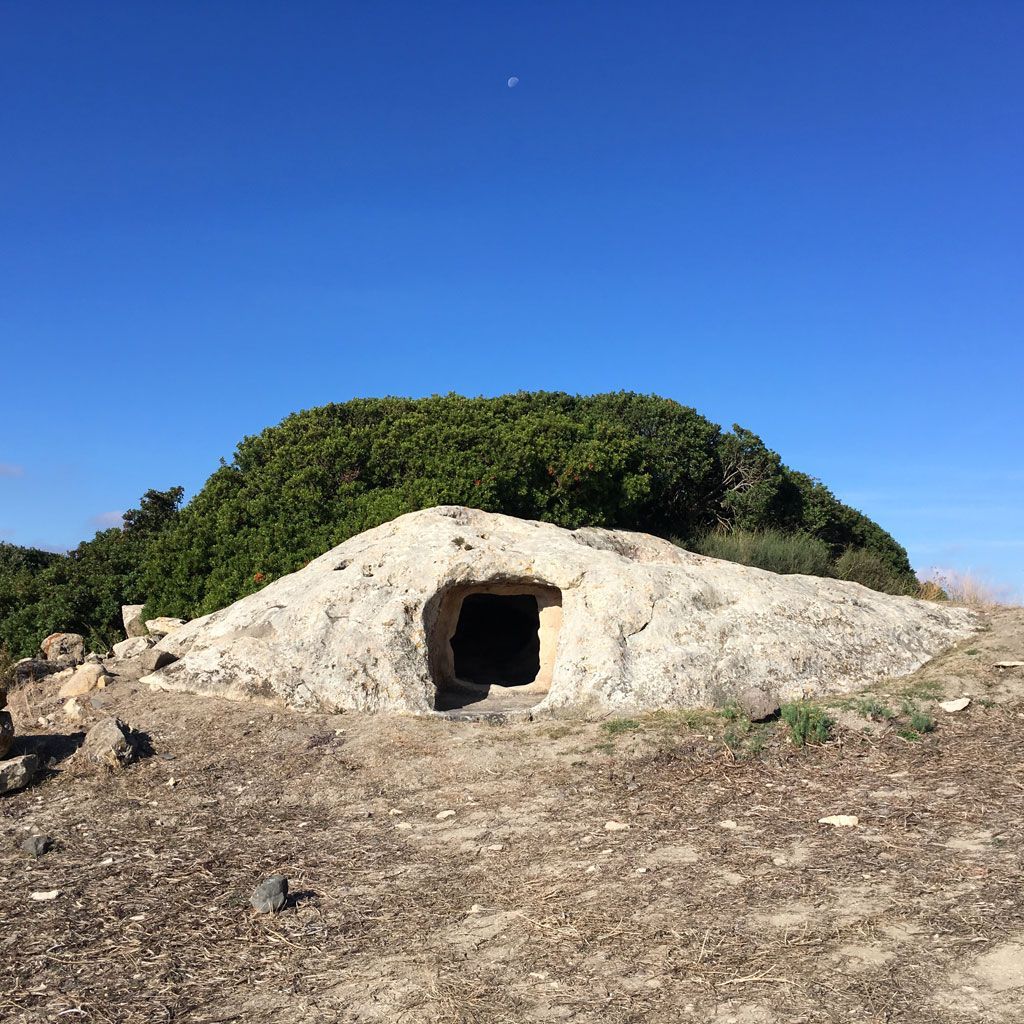 I go back to the main street and practically saw the whole village in half an hour! I enter the bar, fortunately open, and I take a chamomile. A little later, Diego arrives. We haven’t seen each other since my day in Carloforte in January, when he was there for work and we managed to have a coffee together. We immediately the car to go up the side of the Giara. The first stop is in the middle, on a spur of hard sandstone, where the Domu ‘e s’Orcu was dug, a beautiful domus de janas with several rooms, unfortunately partly collapsed and inaccessible inside. 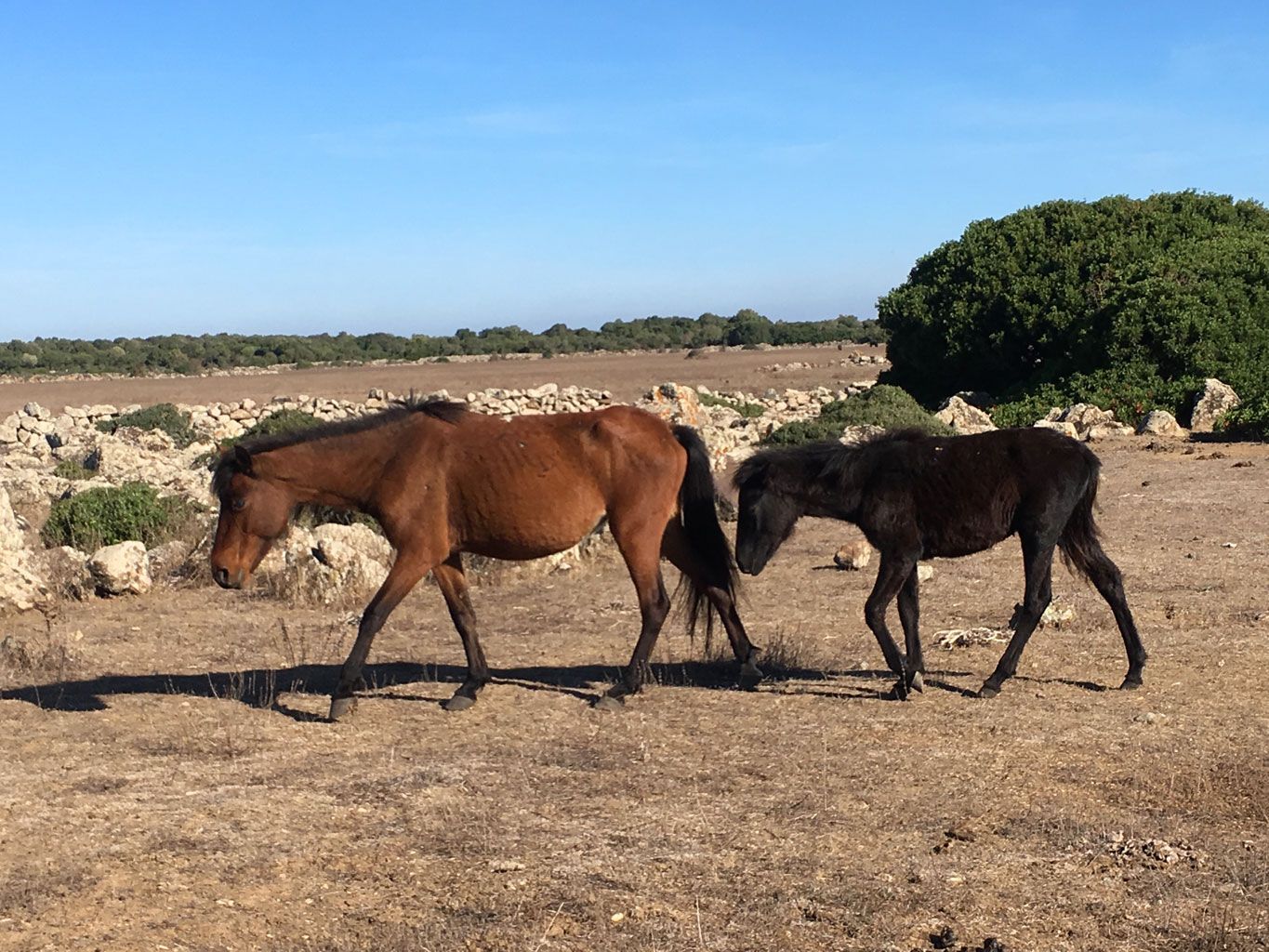 We continue towards the top of the Giara and we access the road that runs along one of the “pauli”, the typical ponds, dry in this season, where often the little horses of the Giara go. And today I’m lucky. Not only are many horses in the middle of the paule, but also some on the roadside and I can see them well, some small and black, others probably of slightly different species, bigger and brown.

Diego, the last Setzese born at home in 1976, tells me that here in Setzu Marcello Marchesi, writer, screenwriter, film and theater director, lyricist and actor, as well as journalist, writer, songwriter and singer, author of television and radio programs, advertising and talent scout (including Sandra Mondaini, Gino Bramieri, Walter Chiari, Gianni Morandi, Cochi and Renato, Paolo Villaggio) found his second wife. His production is immense. At Setzu, Marchesi owned a house in which he locked himself up to write his works.

Marchesì died on July 19, 1978 at the age of 66, thrown off a strong wave against a rock while swimming in the sea of ​​San Giovanni di Sinis. His tomb is located in the modern cemetery of Setzu and the library named after him has various memorabilia including his books.