6 October 2019. The weather is definitely changing, the sky is gray, the temperature has dropped. It is autumn, the second of this journey, which is approaching the end of a year.

I cycle up the hill while observing the approaching Monte Arci and I arrive at Villa Verde, Bàini in Sardinian, which like many other villages has a long history of name, municipality and province changes. From 1341 there is official news of its name, Bannari, which in 1868 changed to Bannari di Usellus, and then in 1927 it was aggregated to the municipality of Usellus, to separate again in 1947. Finally it became Villa Verde (Green Town) in 1954, name chosen in honour of its green woods. In 1974 it passed from the Province of Cagliari to the newly created one of Oristano.

In the square in front of the Town Hall, adorned with large flower beds, I meet the Mayor Sandro, who will guide me to discover this municipality. It seems like a lifetime ago when my friend Mario di Fonni told me “when you are at Villa Verde I will put you in contact with the Mayor, a dear friend”.

Once parked the bicycle, we begin the walk inside the village, skirting a new square with a beautiful two-tone stone paving, white Orosei limestone and basalt. The light and dark of the stone often recurs in these areas rich in sedimentary and lava rocks, even in the houses of the historic center, embellished with beautiful wooden portals.

After the sports facilities we arrive at the church of the Blessed Virgin of the Assumption, a modern design building still under completion and which replaces the previous church built in the sixties which, in turn, replaced a nineteenth century church demolished in the fifties.

Returning to the Town Hall we stop to admire the War Memorial, a basalt sculpture representing the suffering of the soldiers, and next to it a tree has been planted in their memory. We enter the Town Hall where Sandro shows me the council chamber, containing a collection of works of art.

Before lunch, we take Via San Sebastiano, where the homonymous church is located, and we continue, arriving at Casa Crobeddu, a beautiful building acquired by the Municipality that houses the Antoni Cuccu Library. Here we meet Giuseppe Manias, operational director of the Gramscian Library which is located here, accompanied by Giovanni Impastato, Peppino’s brother (killed by the mafia in 1978), who tomorrow will present his book Beyond the Hundred Steps in Pau (I will not fail to be there.)

Honoured to be among people of such cultural caliber, I visit the library spaces with them, especially the sections with and on the works of Antonio Gramsci. I feel totally ignorant of the work of this important figure and I promise myself that once the trip is over I will deepen the subject (with a series of readings in my now long “reading list”.)

Not far from here is the building of the former oil mill whose spaces have been used for exhibitions and shows. At the moment there is a solo exhibition by Jacopo Cau called “No Pietà”, which tells the life and thought of Gramsci through twenty works of art, canvases and sculptures.

For lunch I’m at Sandro’s house. From his surname, Marchi, I had thought that he could be of Gavoi origin, and now a snow-covered Gavoi print hanging on the wall confirms it: both of Sandro’s parents are natives of Gavoi. Mom made us a succulent lunch and I feel almost “at home”.

In the afternoon we take the car to visit the area that climbs up towards Monte Arci. We arrive at the country church of San Mauro, from the seventeenth century, where the feast dedicated to the saint takes place in September. From here we then enter the beautiful Mitza Margiani forest. Sandro tells me about the devastating fires that hit the territory of Villa Verde, in the 1980s and then that of 2009. Fortunately, this part was not affected.

We walk through the green of the holm oaks, arriving at the water springs. We are right under the lava ridge of Monte Arci. Not far from here an artificial sport climbing wall has been set up. Entering further into the woods we arrive at the archaeological site of Brunk’e s’Omu, a Nuragic village with a whole series of huts already excavated and others waiting to be taken out. The place is truly magical, you walk among traces of the past and trees that barely filter the sunlight.

We follow a narrow path that climbs up to a spike where the remains of a nuraghe are found. Sandro tells me about the imminent opening in the village of the Nuragic Civilization Museum to preserve the traces of this important past. From up here I can admire the whole Marmilla that still awaits me to be cycled through. 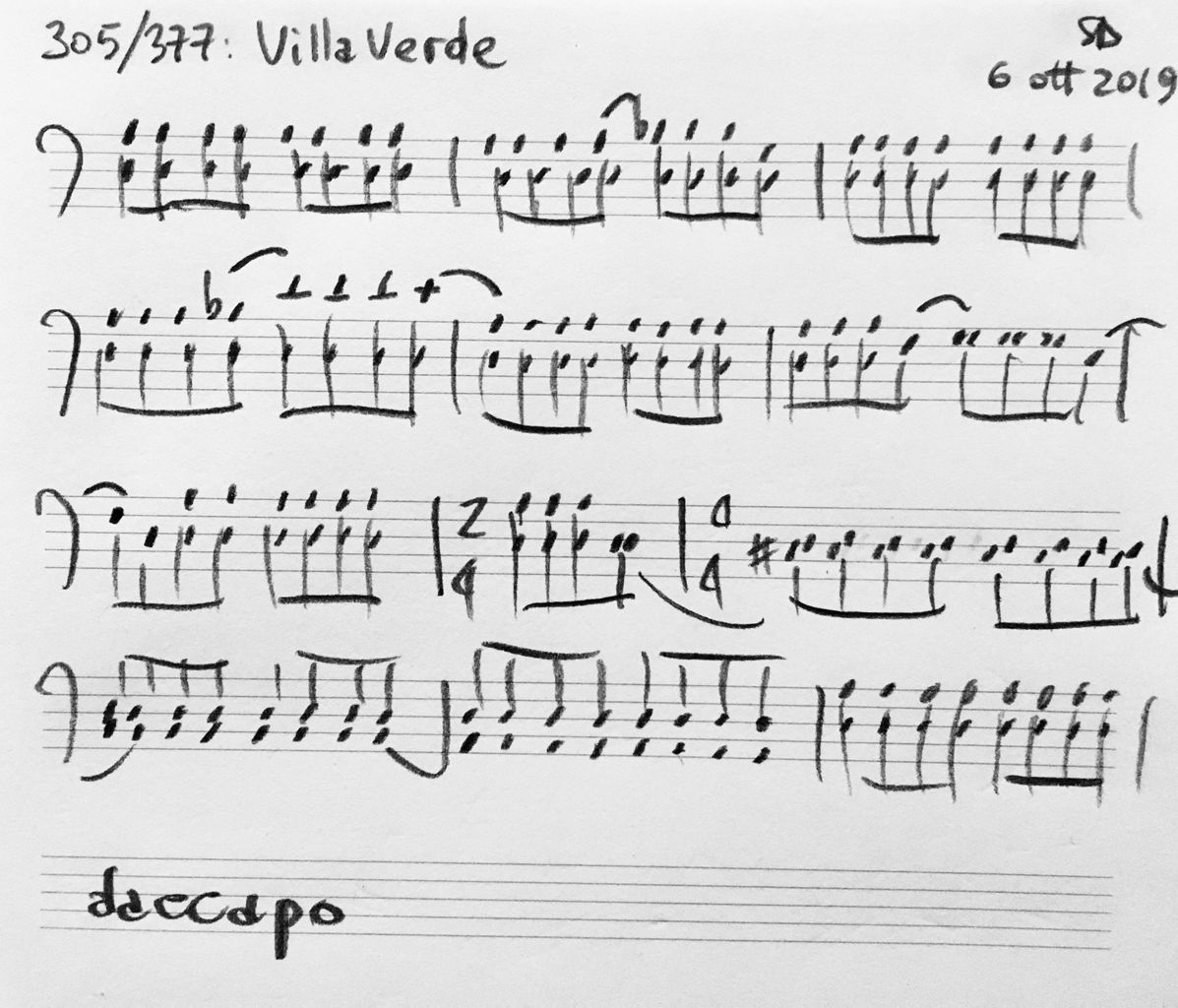 I love libraries, and some of them played an important role in the journey, where I presented my project with stories and music. Here at Villa Verde the library is dedicated to Antoni Cuccu. “Tziu Antoni”, from San Vito, was a lover of the Sardinian language and poetry as well as publisher of poems that he collected and transcribed in small books.

Antoni Cuccu used to put those books in a suitcase, and sell them around the squares of the island, resting on a sheet that he put on the ground. Antoni contributed to make Sardinian poetry of the improvisers (who sang a bolu, litterally on the fly) known. In his precious booklets, poetic competitions and octaves were transcribed that otherwise would have been lost forever.

“Tziu Antoni” died in 2003 and in 2015 Villa Verde named the library after him. Thanks also to the donation by Antoni’s son, Vittorino, of a large number of books published by his father and other publications, the aim of the library is to establish a fund that has Antoni Cuccu as its object. In this collection will be not only publications, but also audiovisuals and unpublished testimonies on the figure and work of him.

Inside the Antoni Cuccu municipal library there is also the Gramscian Library, recognised by the Autonomous Region of Sardinia, one of the richest and most complex libraries dedicated to Antonio Gramsci in the Italian book scene. The Library intends to document Gramsci’s work through books, newspapers, magazines, videos, audio CDs, CD ROMs, DVDs, online digital resources.

I discover the curious history of the various moves of this library. When it was founded in 1997, it was set in Ales, at the headquarters of the cultural services company NUR. In 1998, following a request from the NUR, the Municipality of Ales granted a room on the first floor of Antonio Gramsci’s birthplace in via Umberto I. At the end of this agreement, the library returned to the NUR headquarters in 1999.

In 2004 the NUR reached an agreement with the Municipality of Gonnosnò, which granted a room on the first floor of the Municipal Library, where it operated until the summer of 2009. Then the Gramscian Library returned to Ales until June 2015, in a location of high structural and environmental value. Finally, in 2019 a free loan agreement was formalised between the NUR and the Municipality of Villa Verde and extended until 2023. You still have time to come and visit it in this beautiful village surrounded by greenery!