I dive downhill from Laconi on a splendid day and as I approach the hill of Santu Antine di Genoni a long climb begins. We are on the edge of Alta Marmilla. This territory is not mountains but climbing over its hills-“breasts” (from which the term Marmilla takes origin) with a loaded bike is not easy!

However, I quickly arrive at the small village of Nureci where Gianfranco and Fabia are waiting for me. They will host me for the day in a beautiful, well-renovated historic house.

The first stop is at Monte Majore, which overlooks the village, where the megalithic complex Corona ‘e Su Crobu is located, formed by a granite wall with internal structures where there is a particular block of rock with the appearance of a Mother Goddess. The archaeologist Taramelli came here to study the site in the 1920s.

Back in the village we take a tour of the historic centre, which is very neat and tidy. The houses have types of mixed stone, a lot of trachyte of many colors and limestone. Walking we admire portals, architraves, some open courtyards, and many murals, many by the San Sperate artist Angelo Pilloni.

In many intersections or open spaces there are fountains embellished by the works of the sculptor of Belvì Tonino Loi. We arrive at the edge of the inhabited area where the baronial house of the Touffani, counts of Nureci and Asuni, from the end of the seventeenth century until the death of the last count Francesco in 1874 who left a daughter who was left with the last title of countess, who died in Sassari in 1935.

After lunch, mindful of having already met a Dessanai from Nureci years ago, we go to see Gerardo and Rosina for a coffee. Gerardo’s genealogy is linked to Laconi‘s, while my connection with the branches of this area are still obscure!

Leaving Gerardo and Rosina’s house, we go back out of town to visit a very important outcrop of Miocene fossils, in the Muru Cubeddu area. I’m pretty sure I’ve been here before on a fieldtrip from my undergraduate geology course. At the time they allowed us to collect some fossils. Today, however, the hill is fenced. Despite this, I am not discouraged, I jump over the net in an easy spot and approach an edge full of collapsed stones, where I spot some beautiful specimens of Turritella.

Back home Gianfranco gives me some time to play the piano in the large living room, before activating his phone for a live interview on Facebook. That’s exactly how we met, at the beginning of my journey, when I was contacted by Lorenzo for a live three-way on Facebook that exceeded 10,000 views. 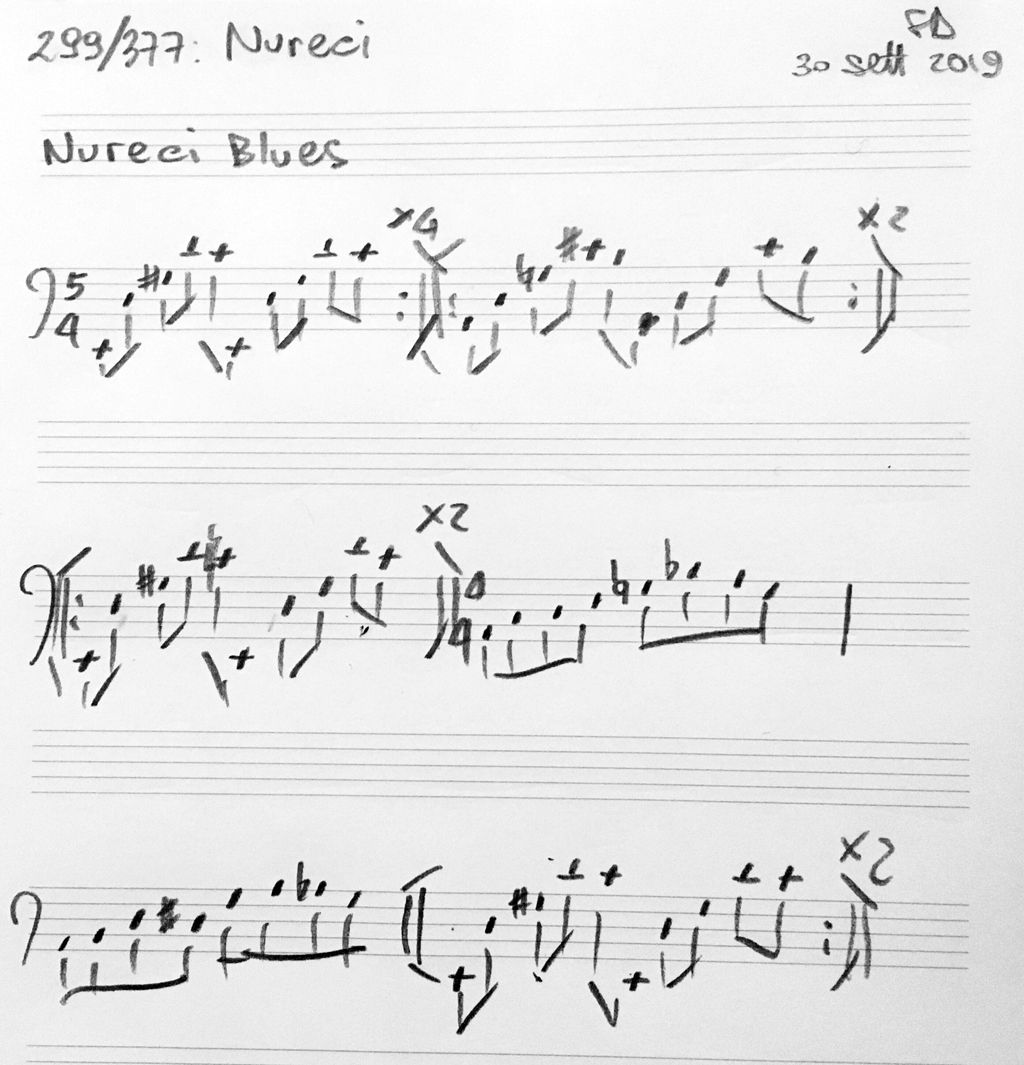 With the microphones turned off, however, I interview Gianfranco Pazzola, born in Sennori but then moved to Cagliari. He tells me about his decision to buy a house in this quiet village after falling in love with it, and about his travel far and wide around Sardinia because of his work.

I ask him if he is a relative of the famous Sennorese poet Antoni Pazzola but he answers no, although he knows all his children and is in contact with them. After doing a bit of research on genealogy sites, we discover several Pazzolas who emigrated to the United States last century, to New York and California.

Gianfranco says he has estimated that he has covered about one million km in 34 years of work in Sardinia. And that perhaps he has seen about 320 municipalities… but 377…no way! And he continues to insist that I will be the only one to have done so. I tell him that I have already found someone but he insists it is not true!

Post Scriptum. In August 2020 the XII edition of the Mamma Blues Festival took place in Nureci, an event dedicated to the music of the devil that has seen important artists from all over the world alternate on stage over the years, including blues giants from the Mississippi delta, as well as local artists.

The Mamma Blues is today a rib of the Dromos Festival, but it was conceived thanks to the vision of a group of people including the councilor for culture Fabio who during the day in Nureci I met when with Gianfranco, and with whom we exchanged a chat about music and the possibility to organise something in the future.

Unfortunately, I discover as I write this article that in the summer of 2020 Fabio left us at the age of 55. I have the memory of a kind and passionate person. May his vision and his spirit always hover among the archaic rocks of this village.