Today is the penultimate great effort of this journey, the last will be tomorrow to retrace the road in reverse. Sadali and Esterzili are in fact separated by a deep valley. From the limestone plateau of Su Taccu, past the Green Train station of Esterzili, I dive into a series of frightening hairpin bends on a thrilling descent, enjoying the breathtaking view. I cry only at the idea of ​​having to redo the uphill road tomorrow!

After crossing the bridge over the stream that flows on the bottom of the valley, the second part of the valley awaits me, all uphill to the village. As soon as I arrive, the effort is rewarded by the beautiful view of the green valley from the main road.

Esterzili is one of the most isolated villages and far from major towns that I can think of. Unfortunately I will not take the provincial road 53 that connects it with Gerrei and with Perdasdefogu, which they told me to be incredibly beautiful because it winds through rough and completely uncontaminated territories, on the north-eastern side of the Lower Flumendosa Lake.

I arrive at the Bandino bar of Fausto and Maria who will give me complete hospitality, meals and accommodation upstairs. I park my bikes and luggage here, and I can’t help but admire the incredible view from my bedroom window. Then I head to the Town Hall, a modern building with some murals on the facade, in front of the parish church of Sant’Ignazio da Laconi, also modern, from 1972, my year of birth.

Here the Mayor Renato is waiting for me. He welcomes me and will dedicate the whole day to visit with me this village with less than 700 inhabitants, and its territory. Once in the car, we climb slowly towards Monte Santa Vittoria. The day is clear and clear, perfect for admiring the view from up here, 1212 meters above sea level. After passing an area equipped for picnics in the middle of a beautiful pine forest, we continue towards the lookout point of the Forestry Authority, in the middle of a terrain where the rocks stick out sharply and seem to point to the sky.

The view from here is truly magnificent. To the north the Barbagia di Seulo, to the south the Gerrei and Sarrabus, to the west the Sarcidano and even the Campidano, to the east Ogliastra, up to the sea. We stay here for a while to enjoy the view and the sparkling breeze. I am happy that the summer is finally over, and that tomorrow the last really tough stage awaits me. From here on, what remains of the journey seems to me really all downhill.

Not far from here are the archaeological remains of a megalithic enclosure with the remains of pre-Nuragic huts inside. But it is the archaeological site that we visit after, driving for a while on the internal slope of Monte Santa Vittoria, that leaves me speechless. It is the Domu ‘e Urxia, the largest “megaron” temple ever found, at almost 1000 meters of altitude, built in schist, inside an elliptical enclosure.

We enter its structure, an antechamber and two rooms, one main and one smaller. Renato tells me that various bronzes emerged from here, which I will see later exhibited in the display cases at the Pro Loco headquarters in the center. Another important archaeological evidence of this area is the Table of Esterzili, a bronze plate bearing an inscription in Latin that describes the dispute between the peoples of the area, the Patulcenses of Campania and the Gallilensi.

After visiting the nearby Nuragic water springs, a system of water channeled and collected in still visible wall structures, we return to the village to visit some churches. On a hill just outside Esterzili is the small church of San Sebastiano, of seventeenth-century origin and, in its vicinity, the remains of a nuraghe, partially destroyed, but whose lower part, still completely underground, could hold surprises.

In the lower area of ​​the town is the old parish church of San Michele Arcangelo, from the Spanish era, which portal is surmounted by an arch and a rose window in light limestone. The last church we see, that of Sant’Antonio da Padova, has a sober facade with the statue of the saint set in a small niche above the door.

In the evening we take a tour of the historic centre. Many houses are now modern in style, but above all in the upper part of the town there are some “ancient” glimpses, some stone stairways and walls in schist typical of the area.

There are many murals that represent scenes of past life: the shepherd who returns with the flock, the cart with oxen, the one above the war memorial with the train that stops at the station, some with a social and denunciation background, the modern one in Luciano Lixi on the wall of the former library, and then many elder people.

Before ending the day, Sandro from the Esterzili Sant’Antonio and Su Fogu Folk Group joins me. Unfortunately, there wasn’t much time to organise a meeting and play, so we have a chat at Fausto and Maria’s bar, and we promise to organise something in the future. I withdraw to my room and observe the darkness of the valley that I will have to face tomorrow … one of the last efforts. 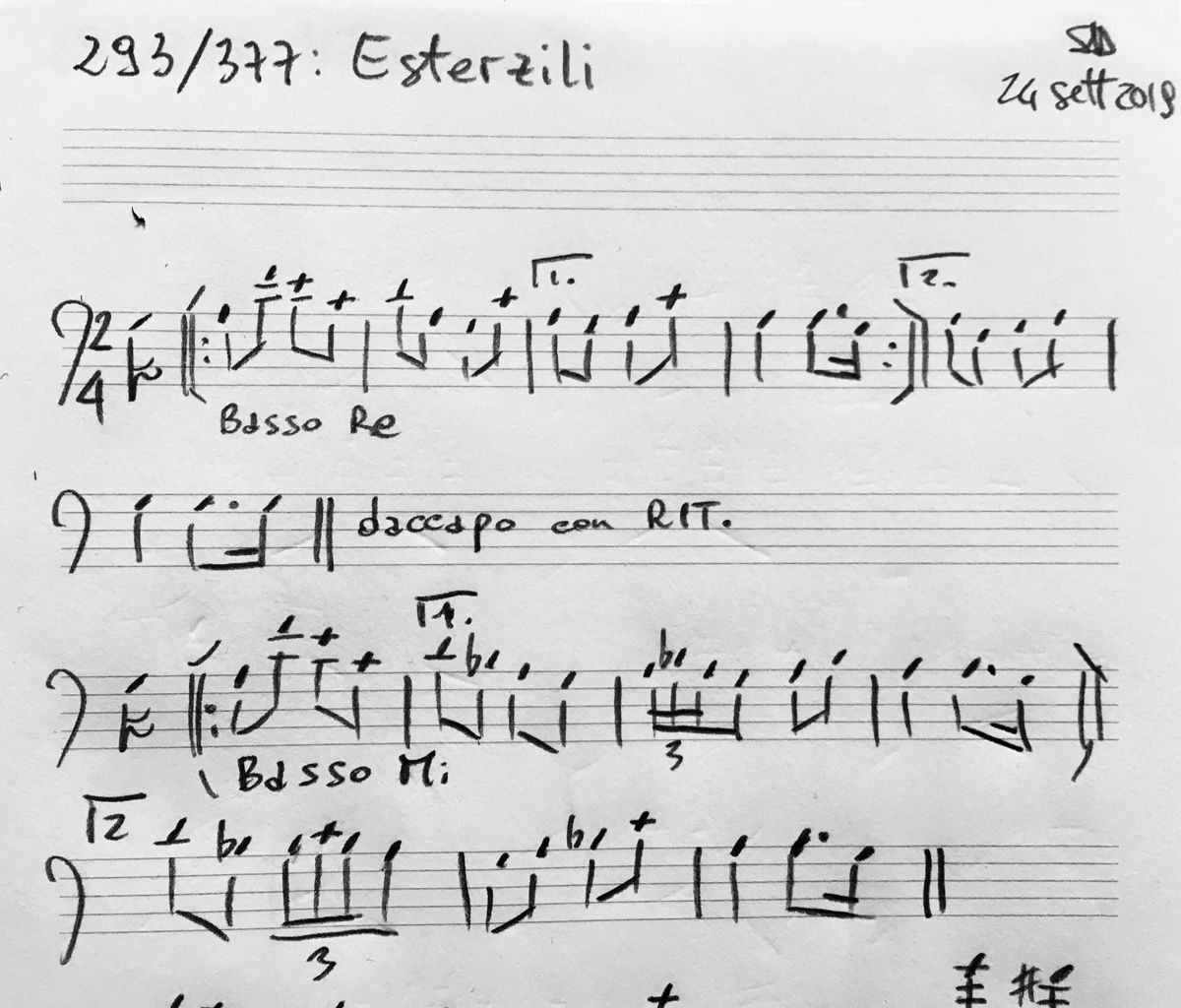 For me, as a child, Professor Pilia was that nice gentleman who lived just one floor below my grandparents’ flat in Cagliari, whom sometimes we crossed on the staircase, or met in my granddad’s study room to chat (probably about Sardinian stuff).

But I only discover today that Fernando Pilia, one of the most active exponents of Sardinian culture, was born in Esterzili. He graduated in literature with the famous archaeologist Giovanni Lilliu, with a thesis on the prehistoric archaeological heritage of Esterzili, and later worked with Lilliu himself at the Su Nuraxi Nuragic palace in Barumini.

For a few years he became mayor of Esterzili, but teaching took him to Cagliari, and yet he was always engaged in activities far and wide around the island. For example, I discover that his contribution to the growth of the “Città di Ozieri” literary prize, the oldest of the poetry competitions, of which he was an authoritative exponent of the jury for several decades, was remarkable. Many of his publications, including the monograph “Esterzili. A village and its memory”, “Sardinia, the artisan work”, “Popular traditions of the province of Cagliari”. While doing research on his name I also find his radio work on the Book of Comedies by Fra Antonio Maria di Esterzili, a monk whose life is still quite unknown, except the fact that when he was in the Sanluri monastery he wrote is work in Campidanese language.

His Book of Comedies, a manuscript volume from 1688 kept at the University Library of Cagliari, is a collection of works in Sardinian language (despite the titles in Spanish) that recall the events related to the life and death of Christ. Real theatrical productions of the Sacred Representations.

I also discover that my grandfather Sebastiano had studied and analysed them. Closing my eyes I see my grandfather behind the desk in his study, and Professor Pilia, intent on dissolving doubts about the meaning of some words in these theatrical productions. That’s what they were talking about!