After the tiring ascent from Seui, I arrive at the extensive limestone plateau called Su Taccu, on a slope of which Sadali is located, surrounded by its magnificent territory.

I enter the village where a sign reminds me of his belonging to the most beautiful villages in Italy and I arrive at the Town Hall where the councilor for social services Sonia and Linda, head of the socio-cultural and administrative service, who yesterday played the sax and danced in the Seui in Street Band, are waiting for me.

I’m in good company to discover what is called the “village of water”. We walk down the main street that reaches the oldest area of ​​the village, the original nucleus around the parish church of San Valentino. We enter to admire the interior. They tell me that below the altar there is an old Roman furnace from 500 AD. where numerous skeletons would be found. The tabernacle all placated in gold from 1600 i impressive.

Around the church I begin to admire the water that flows everywhere and that makes this town unique. Not far away is the San Valentino waterfall, where the green has covered the rock. Behind the waterfall we visit an old mill inside which the old machinery still stands.

In the streets around there are fountains almost everywhere. We skirt the Casa Podda, an ancient noble residence, and reach another urban waterfall, in the middle of the houses, the Sa Pischera waterfall, so called because its waters feed the tanks where trout are raised. Further on are the Podda Gardens, a real park crossed by water channels, where the old wash houses are still in use.

Walking among the old houses I can admire historical images on the walls, and plaques with popular sayings. A plaque commemorates Mundica Boi and Peppina Cuboni, two elderly people who, with their testimonies, contributed to the recovery of the historic centre.

We arrive up to the Funtana Manna, the source that feeds the whole water system. Nearby are the ruins of another mill. There used to be many of them, in succession throughout the system of canals and gores.

Back down to the lowest area of ​​the historic centre, in Piazza Eleonora d’Arborea with a fountain in the center, we walk among very old houses, some abandoned, but many renovated, maintaining their original characteristics. On one side of the square is the “Maistu e peddi” (leather worker) shop, and not far away that of the blacksmith, where we enter to admire the myriad of junk scattered around, like in a museum of disorder.

We arrive at the Sa Ucca Manna cave. This huge cavity was created by the struggle between two types of water, the limestone of the Jurassic dolomites which deposited the travertines, and the silica of the paleozoic schist base which corrodes everything. Here too, the water flowed with such force that it also fed the machinery for processing the heather used for the construction of pipes, an activity that has now disappeared.

After having lunch at Linda’s parents’ house, in the afternoon we go to the Is Janas caves, on the plateau, where Doriano welcomes us, a geologist who is part of the Ecomuseo delle Acque della Barbagia, the integrated system of cultural, naturalistic and environmental issues of Sadali. We visit these marvelous cavities covered with all kinds of limestone concretions, stalactites, stalagmites, mamelons. Unique endemic species also live here.

Leaving the caves, we take a path immersed in the holm oak and cork wood. Here once coal was produced, as evidenced by the reconstruction of a charcoal pit. Further on we find an old kiln for the production of lime. All around limestone spikes that seem to form a real city of stone. We arrive at a belvedere from where I can once again admire the beauty of this area and the Flumendosa valley. Over there somewhere is Su Stampu de Su Turrunu, the waterfall I visited in my day in Seulo, right on the border between the two municipalities.

The film Aradia by director Luca Valdes, a horror story set in the nineteenth century, was shot in this area. Back in the village, we take a final tour of this magical, and somewhat mysterious place, which not only provided places and inspiration for Valdes’s film, but also contributed to the birth of the “elf” story. When Daniela welcomes me to my accommodation tonight, the beautiful b&b Le Case del Folletto (The Elf’s houses), and then goes away telling me not to worry if I hear any noises during the night, I start to sweat cold. 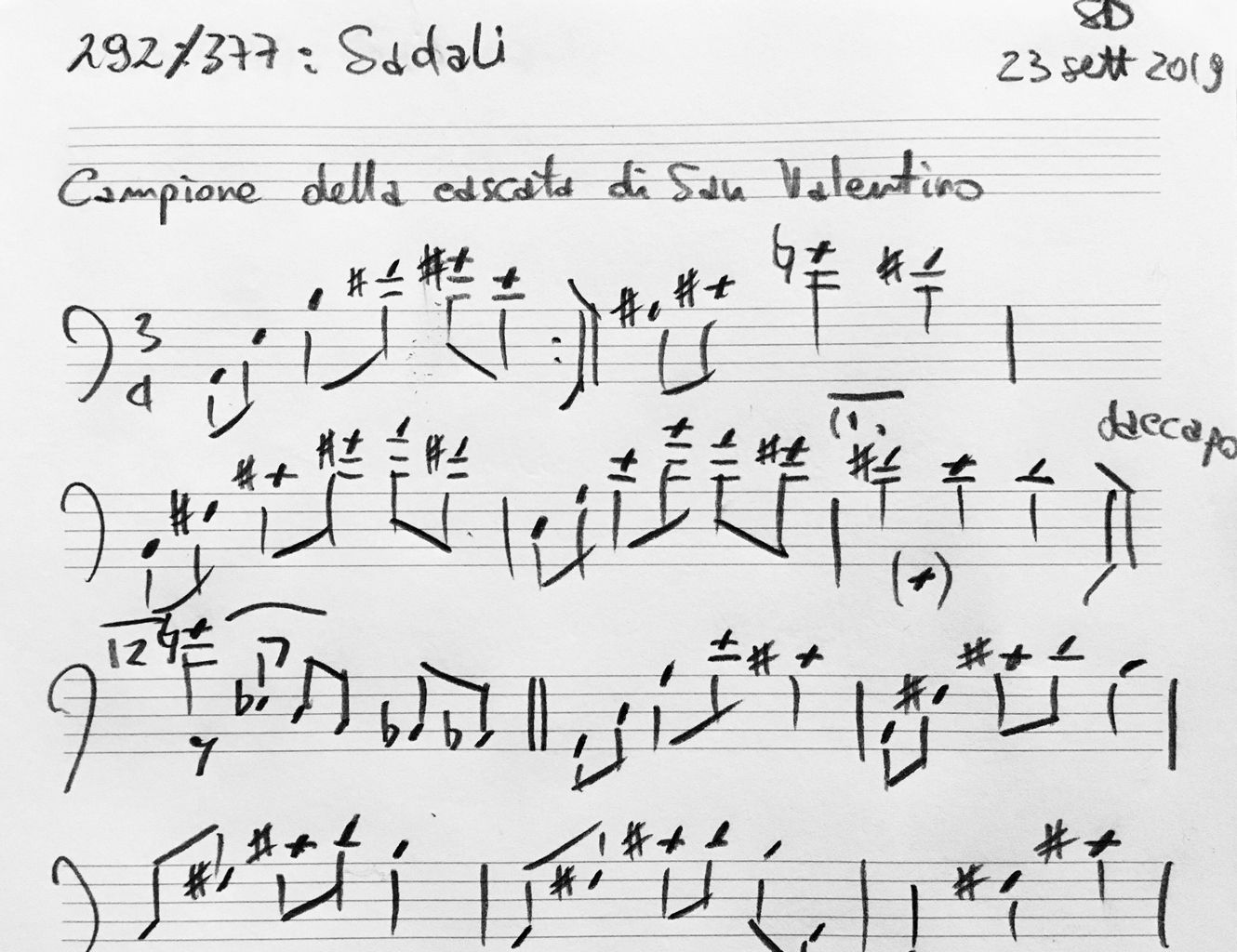 “The men carried the dead body of the young man into the small room and laid it on the stoa. That was his last earthly bed. Around the fire the women of the house gathered in a circle and began that ancient ritual that took them back to the distant mists of time […] The screams of pain, voices and tears to remember their cousin, husband, son and brother who a unknown hand had taken away”.

Thus begins the story of the “elf”. With a dead man. In Oliena. Brother Salvatore decides to leave for a distant place, taking away his elderly mother and only daughter Orsola. They settle in Sadali, in the same house where I am staying tonight, where spirits were said to be hovering. While the old grandmother continues to hear voices and noises in the house, Orsola digs in the garden and finds a treasure, a sack full of coins.

“Meanwhile, time passed quickly, the years passed and Orsola became a beautiful girl, while her grandmother became even more seriously ill. She screamed day and night, she suffered the pains of hell and now there was nothing more to be done. She begged his son and granddaughter to call s’accabadora, to free her from that torment. Then they went to call a poor old woman who lived in the neighboring village and she carried out her task”.

Once Orsola’s grandmother died, Orsola too began to hear voices in the house. One day she walked over to those noises and saw an oddly dressed elf in a red hat. A kind of friendship developed between the two. The elf appeared from time to time and was there to guard Orsola’s treasure.

“Since hes childhood she had heard of those called the massamurreddus, but she thought they lived in caves or ravines, in the middle of the woods far from men. It was said that they had the onerous task of guarding the iscusorzos, the treasures, but they did not always succeed”.

The story goes on with the marriage of Orsola, then with the death of her father Salvatore, who tore her heart to death. The treasure was never found, not even by Orsola’s children, and the house was slowly abandoned. Only after the First World War the house was enlarged and inhabited by Lorenzo, son of Orsola. It seems that one of his daughters also saw the red elf, and that the voices and noises continued until Lorenzo dug up the remains of a priest who once lived in this house from the garden and threw them into Sa Ucca Manna.

The history of the house, including the disappearance of objects (will it be the elf?), continues to the present day. I must admit that when I turn the key to enter the courtyard in the dark, and go up the stairs to my accommodation, my heart is pounding and my ears are sharp to pick up every single sound … but I’m so tired that as soon as I lie down on the bed I collapse, and the only noise that will wake me up will be my own snoring!