Today, I travel in company. Antonio, whom I met yesterday in Paulilatino, decided to cycle with me to Ula Tirso. We leave early and cross the last bastion of the Abbasanta basaltic plain, surrounded by olive groves and cork oaks.

Before descending towards Lake Omodeo we deviate towards the hamlet of Santa Chiara, in the municipality of Ula Tirso. Antonio tells me that here lived the workers who worked on the construction of the Santa Chiara dam, the dam of the River Tirso which gave rise to Lake Omodeo.

At the end of the 1980s, with the dismissal of the hydroelectric plant of the old dam, the small town was abandoned. We arrive at a gate that blocks the access road to the village, beyond which we can see some houses and the bell tower of the church.

We get back on the saddle, and after a spectacular descent towards the lake we arrive at the bridge, which we pass admiring on the left the architecture of the Santa Chiara dam, now replaced by the much wider Eleonora D’Arborea dam, a little further downstream in the territory of Busachi .

My return to Barigadu after many months is characterized by the tough climb that awaits us to arrive in the village whose ancient Sardinian toponym was Ulà, to which the word Tirso was added in 1870. I stop out of breath at the entrance sign, which tells me that Ula Tirso is twinned with Peschiera del Garda in Veneto (after researching the meaning of twinning between municipalities, I discovered that Peschiera del Garda is also twinned with Capoterra!)

Once arrived at the Town Hall I say goodbye to Antonio and I am welcomed by the Mayor Ovidio and the Deputy Mayor Ottavio. As there are no accommodation facilities in the village, today I will be Ovidio’s guest. This attention was given to me only a couple of times during the trip, so today I feel privileged.

Ovidio and Ottavio accompany me to discover this small village, which can be visited in its entirety in a short time. After weeks of dark basalt, I finally find the pink of the trachyte as the building stone of the houses, the beautiful and imposing parish church of Sant’Andrea and the suggestive church of Santa Croce.

On many walls there are panels with black and white photographs depicting the significant moments of the construction of the Santa Chiara dam. Ovidio recommends the book “Aurora Sarda” by the priest writer of Berchidda Pietro Casu, set in the valley leading to the lake. At the time of the dam construction this area was widely populated, but today are only ruins of houses remain.

We pass through a street brightened and shaded by the presence of colored umbrellas hanging between the houses (particularly useful today that rain is forecast!), then a square with a large traditional mural, and finally we arrive at the home of the musical instruments manufacturer Michele Loi. Here I stop to admire a variety of instruments created by Michele using the cane, but also ox horns, pumpkins, and the typical pig’s bladder for the “serraggia”.

I try to play a bena with poor results, but nevertheless record the sound for later use in my sound fragments (I will use it in the Fordongianus fragment). At the end of the visit Michele gives me some instruments that have an elastic cord which, when pulled and released, makes a piece of wood spin quickly and emits a noise similar to the wind (which can be heard in today’s fragment).

Before lunch we are able to visit the public park on the outskirts of the village, reachable with a walk in the green, and then we retire to eat at Ovid’s house. Between a chat and some wine Ovidio explains the project for the Santa Chiara dam museum, which should collect all the historical material relating to the construction of a work of great importance for the whole of Sardinia.

In the evening, in addition to taking a tour in the village center to take some photos, we take the car to reach the dam, which I also saw this morning and where they also took me in my day in Ghilarza. Back then, the old caretaker’s house at the base of the dam front was almost completely submerged, in a eerie atmosphere, while today it is completely emerged and surrounded by a green meadow.

As on other occasions during the trip, again today I make an exception to the rule. Ovidio is invited to an event in Sedilo to commemorate Paolo Pillonca, the recently deceased writer from Osilo, and I decide to go with him.

I’m happy to see the centre of Sedilo again and I listen to the interventions, including the musical one of the singer-songwriter Piero Marras, for whom Pillonca wrote several song lyrics. Before returning to Ula Tirso we go to a pizzeria in the next village, Busachi. So today, the municipalities I touched are actually four. But the beauty of my journey is also this, the more I proceed, the more I decide to make my rules flexible to enjoy every moment of the journey, even at the expense of the daily writing of the blog (PS that’s why this article is published over a year after this day!)

At the lake (with the “wind” of Michele Loi’s instruments) 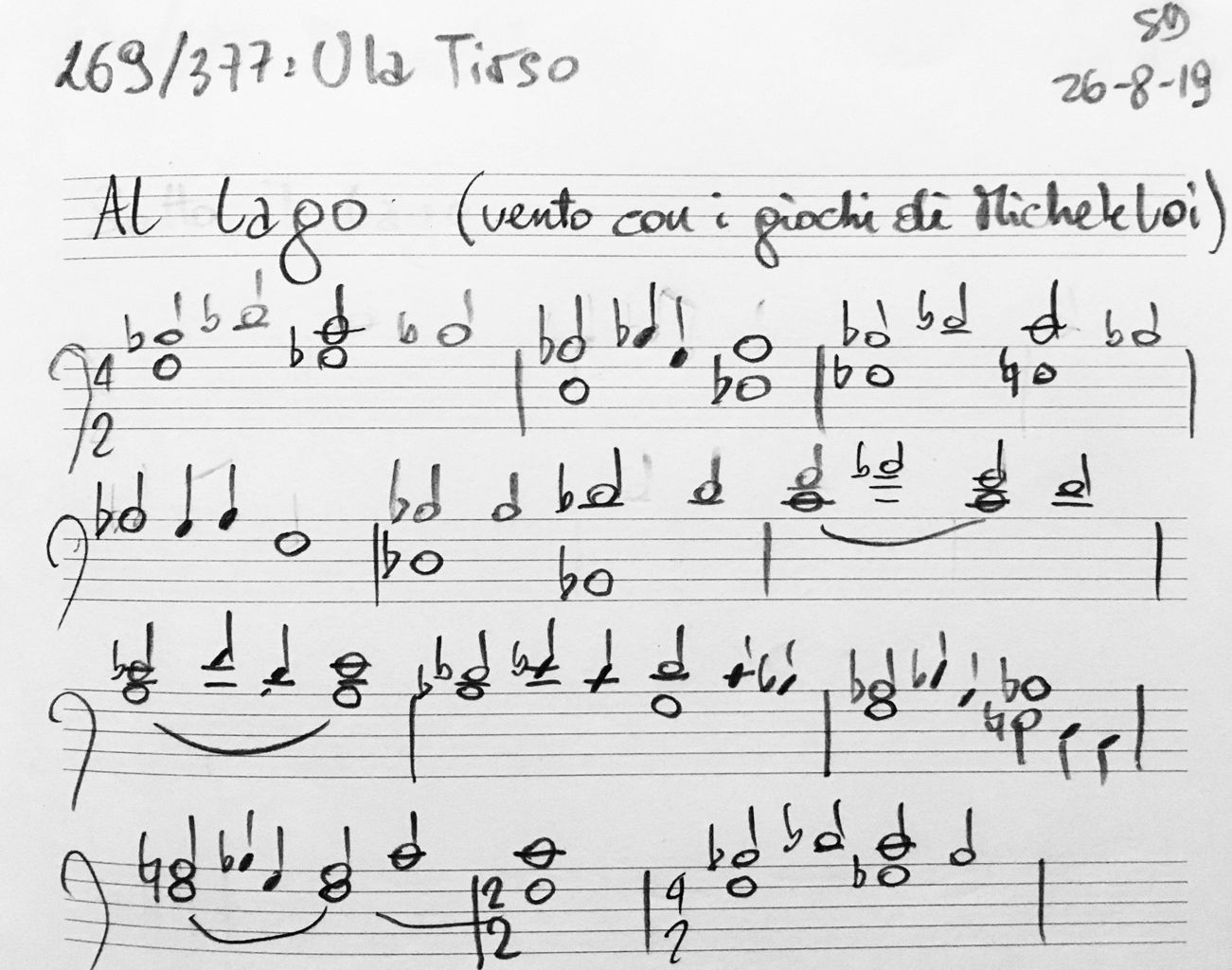 When we stop with Antonio at the gate that closes the village of Santa Chiara, it occurs to me that months ago, in some village on the shores of Lake Omodeo, someone told me about an elderly lady who still lives here and that it’s worth meeting.

Next to the gate is the house where Tzia Isabella lives, the only inhabitant left in Santa Chiara. We peek and ring the doorbell, but nobody opens us. So I have to settle for the stories told about this lady, who dreams of reviving the place, now a ghost village.

Here are the words of the Abandoned Sardinia website:

“Apart from a few years spent on the Italian peninsula, Isabella spent the rest of her life in this Sardinian village. The Flore family arrived in this hinterland village many years ago, when Isabella’s father was involved in the construction of the dam, which later gave rise to Lake Omodeo. In those days Santa Chiara was a lively village, inhabited by the families of workers, who, however, once they lost their place gradually decided to go and find their luck elsewhere.

Today, however, Isabella dreams of being able to reverse the trend and transform this ghost village into a place where abused women and children can find peace and serenity. In fact, for some years now, the 88-year-old has created a non-profit organization and collected all the necessary documents that she forwarded to Enel, the owner of the buildings in the hamlet of Santa Chiara. The goal is to receive the approval to set up a reception center that can revive Santa Chiara and, at the same time, help people who have had very negative life experiences to get out of the tunnel. For now, however, Isabella has not yet received an answer.

While the answers are slow in coming, the buildings become increasingly old, burdened by the passing of time and lack of maintenance. Isabella, however, does not give up and despite her advanced age continues her battle, intent on making the historical memory of this territory survive. A mission that she tries to carry out also through the dam museum, which houses many documents dating back to the era in which the work, highly advanced in terms of engineering for the time, was built. “