Today is a short trip and all downhill. I arrive in the Town Hall, where the Mayor Salvatore receives me. He organised my morning with the boys from the civil service, Federica, Federica (another one), Romina, Paride and Mattia.

We take two cars to reach some sites outside the village. In past geological eras, the whole area has been affected by volcanism of various types, and therefore it is rich in hills, former volcanoes, lava flows, with Miocene limestones that emerge here and there. And it is precisely here that we head, in the Bonu Ighinu area where there are a series of karst caves, once also inhabited by man.

After traveling through country roads, we park the car and walk for a while and we arrive at the Caves of Tintirrioulu and Filiestru. Here there is a very long karst system but we can only see the entrances. On the other side of the side of Monte Traessu on the border with Cossoine we can see a large kaolin quarry, with the white-pink color clearly visible, which has recently resumed its activities.

We continue the tour, visiting the Sanctuary of Our Lady of Bonu Ighinu, a beautiful seventeenth-century church, surrounded by modern “cumbessias”, remains of pre-existing buildings, with a beautiful rococo-style front staircase. Inside the church there is a beautiful wooden altar with the statue of the Madonna, which according to legend appeared to bring peace between neighbouring villages (hence the name). Rumors say that the Madonna became very heavy when some inhabitants of the neighbouring villages tried to steal it from here.

From the staircase you can enjoy an excellent view of the area, including the hill called Bonvehí, which I also clearly saw from Monteleone Rocca Doria and yesterday from Pozzomaggiore (where the Bonvey coffee was born, which takes its name from this hill). Once on top of the hill there was a Doria castle, now all ruins. 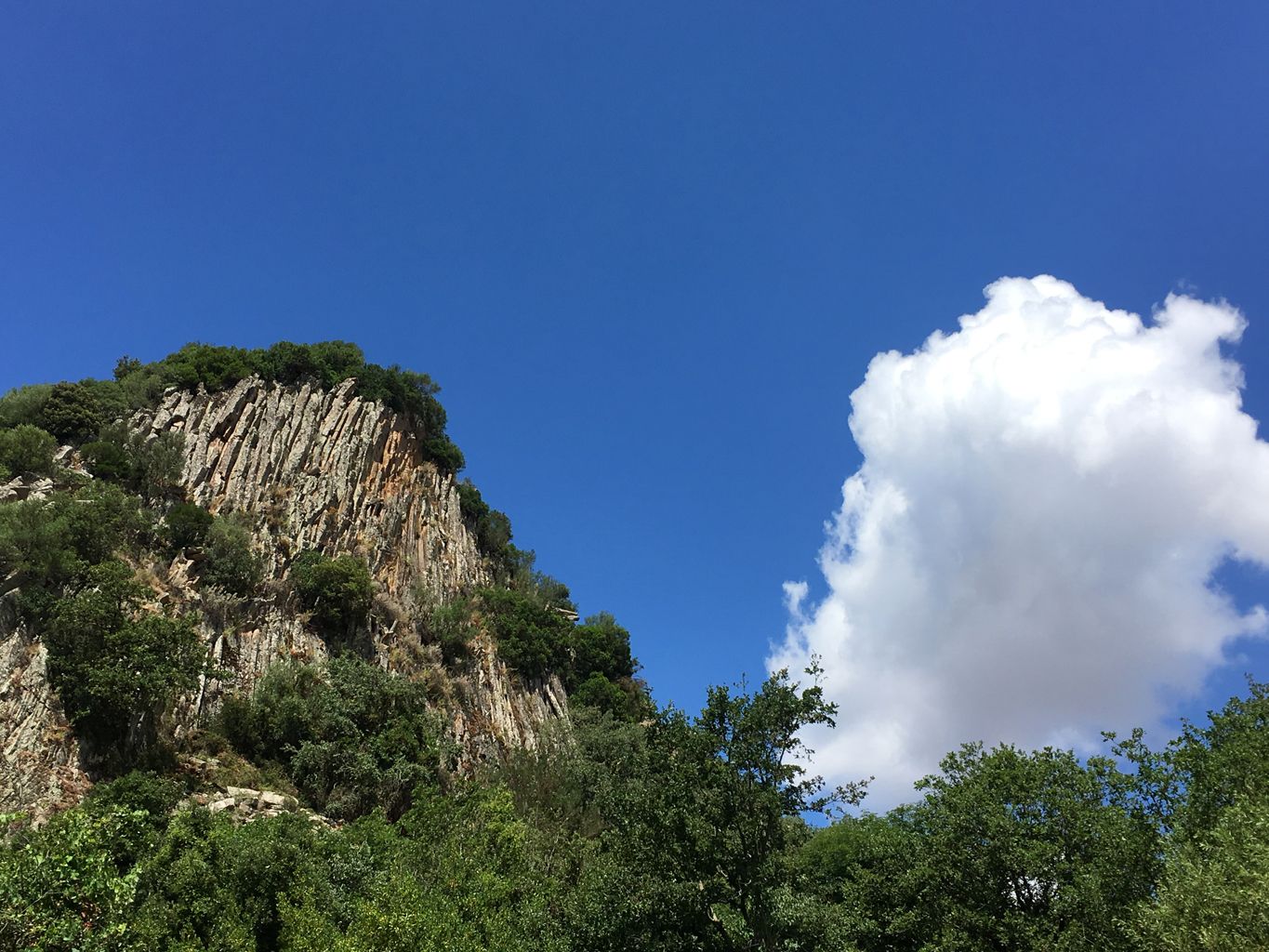 We continue the tour, skirting volcanic heights, where I recognise the typical columnar forms of the basalts, very rare and already seen in Guspini, and then two large ‘calderas’, real mouths of a volcano, one of which is Monte Larenta. We arrive at a hill just outside the village, where the remains of the nuraghe Coladorzos are found, immersed in a forest of ancient trees. From here you can distinctly see the three neighbouring villages, Pozzomaggiore in the upper left, Mara below and Padria a little higher in the right.

Back to the village, after an aperitif at the bar together with Sara, the traffic warden, the guys take me to see the Museum of Rural Life, in a beautiful renovated historic building. Here I can admire a series of rooms reconstructed with the furnishings and objects of the past, kindly donated by the inhabitants of Mara, together with a whole series of tools of the old trades, the largest of which (among them a huge threshing machine) kept in the large garden.

We return to the Town Hall, where I say goodbye to the Mayor Salvatore, the boys, and the traffic warden in the boardroom, and I also manage to improvise two notes with the ukulele, before retiring to the Antas b&b booked by Salvatore. Here I eat, rest and work a long time before the hot hours pass and I can tour the village again.

In the evening I take my bicycle to cycle across the centre. I visit the churches, compulsory as a coffee on arrival in the morning, the eighteenth-century parish church of San Giovanni Battista, and the smaller Santa Croce. I cycle through the streets of the centre, and following one, full of elegant buildings, I arrive at a dead end which ends with a panoramic railing over the valley, beautiful. From here I continue passing the square dedicated to Padre Pio, whose buildings are all frescoed with murals, and arrive at another road that ends on a beautiful panoramic spot.

I go back to the main square, I take a coffee at the bar (will it be Caffè Bonvey?), and right behind it I notice a hidden square full of trees that produce a nice shade and surrounded by houses with murals. I finally go back to the b&b, I work like crazy in front of the window overlooking the same valley that I saw before, with Padria in front waiting for me tomorrow.

To the good neighbourhood, against all parochialism. 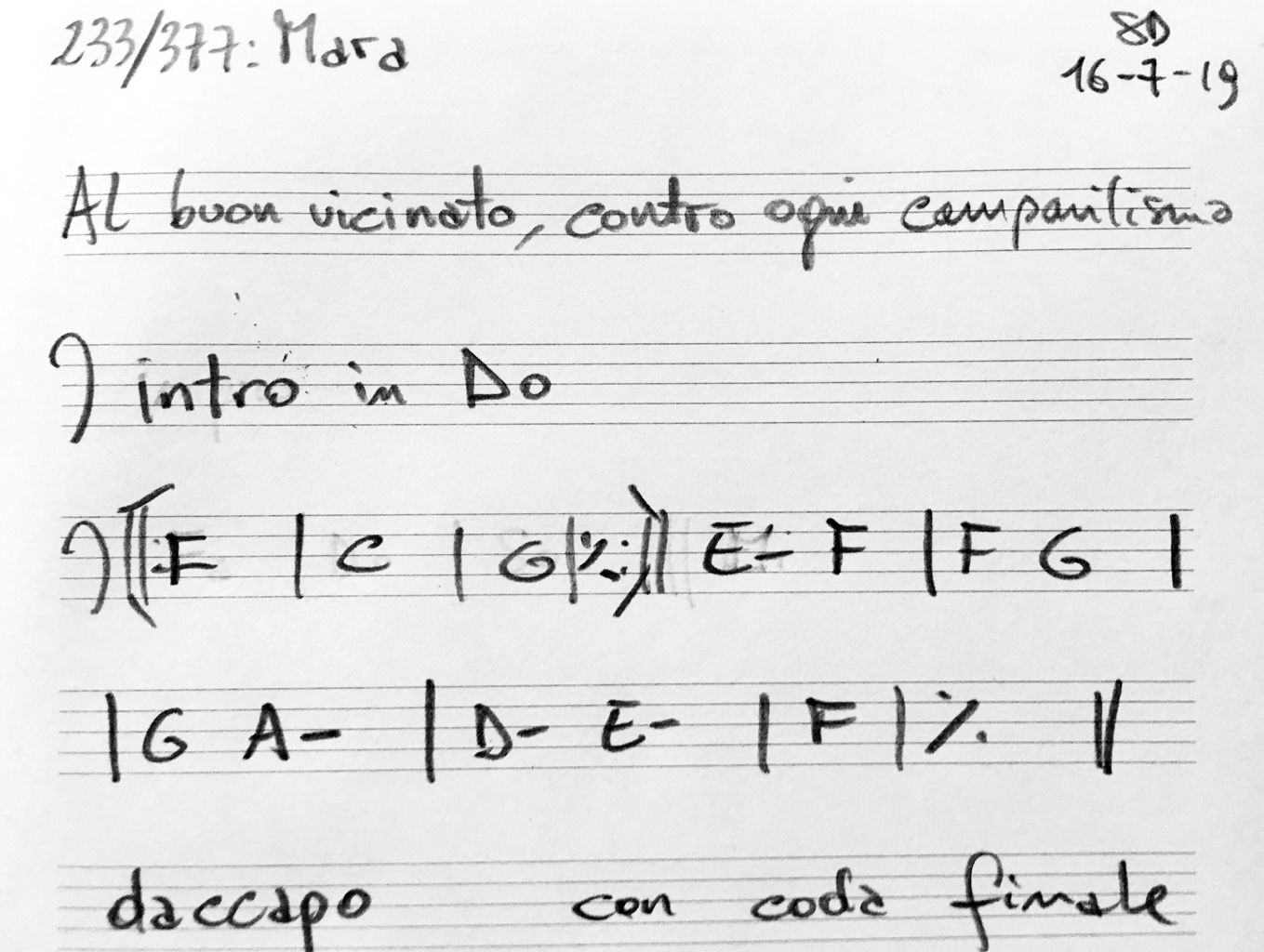 “Campanilismo s. m. [Der. bell tower]. – Exaggerated and narrow-minded attachment to the traditions and customs of one’s city”. Definition of parochialism from the Italian Treccani Encyclopedia.

The meeting with parochialism took place very early on this journey. I smiled and I also joked about it at the beginning, but today I realise that I did it unconsciously, the unconsciousness of the one who does not know problems, causes and consequences in depth. There are so many diatribes for the ownership of a church, a nuraghe, a waterfall, a rock sculpture that in the end I stopped counting them. The statues of saints, stolen from one municipality to another, have done more damage than ever. The joke of not drinking water in the neighbouring village otherwise you will get stupid (heard in many villages).

Already at this point in the journey, I’ve heard so many stories of parochialism that they no longer make me smile. Especially since a boy of about ten recently asked me where I was going the next day. “I’m going to X (nearby village)” and he replied, with a voice and expression more like those of an adult than a child: “don’t go to X, they’re bad, keep going straight and go to Y”. From that precise moment I lost my smile towards all those jokes, often good-natured, towards the neighbouring village. How can a ten-year-old boy already take on such an attitude for his neighbour? An attitude that is harmless now, but over the years can easily trespass into something more, as shown by the many episodes, far from harmless, related to diatribes between neighbouring villages.

“Campanilismo” was certainly not born in Sardinia, but is widespread in the rest of Italy (think of the historical rivalries between Palermo and Catania, between Pisa and Livorno, between Brescia and Bergamo, between Parma and Reggio Emilia, between Verona and Vicenza, and many others). And then the parochialism that extends from the nation towards another nation.

I am reminded of the English definition of parochialism. The Cambridge Dictionary gives a slightly different definition from the Italian one, a little wider: “the quality of showing interest only in a narrow range of matters, especially those that directly affect yourself, your town, or your country”. I prefer this definition because it highlights the aspect of mental closure and selfishness that often hides behind a parochial attitude, and which in Sardinia I have the impression is the cause of a series of small and large problems.