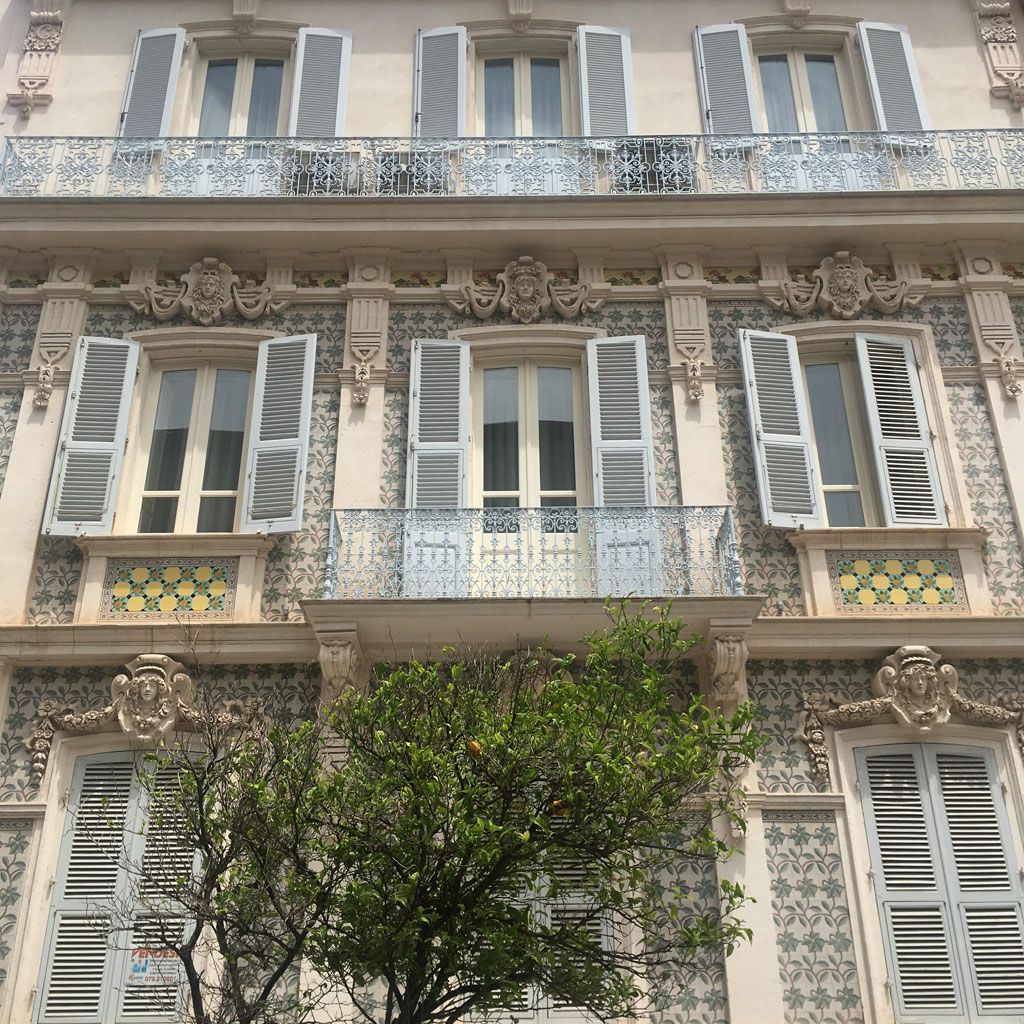 I already saw Sassari from the top of Osilo, an expanse of houses compared to the average size of the villages of the Anglona. As already happened for Oristano and Olbia, I can feel the town vibrating from afar, one of the largest Sardinian towns, although many denigrate it by giving it the name of ‘big village’. I assure you that for those like me who have lived in a city of two million inhabitants, if Sassari is a ‘big village’, so is Cagliari. In reality they are both two towns.

I find an internal road that cuts the countryside from Sennori. It is narrow but with little traffic, and as I get closer I see the first houses of Sassari on the other side of the limestone hills, and all the tall buildings behind. Sassari is surrounded (and also crossed) by calcareous canyons. To enter it, unless you arrive from the 131 state road, you have to climb (there is a road coming from the south called “Giocca stairway” road coming from the south).

Once I traveled a long descent that reaches the bottom of one of these valleys, I slowly ascend a steep slope that brings me back to the extremely dangerous state road 200, which fortunately I cover only for a very short distance before entering Sassari and find a nice cycle lane! 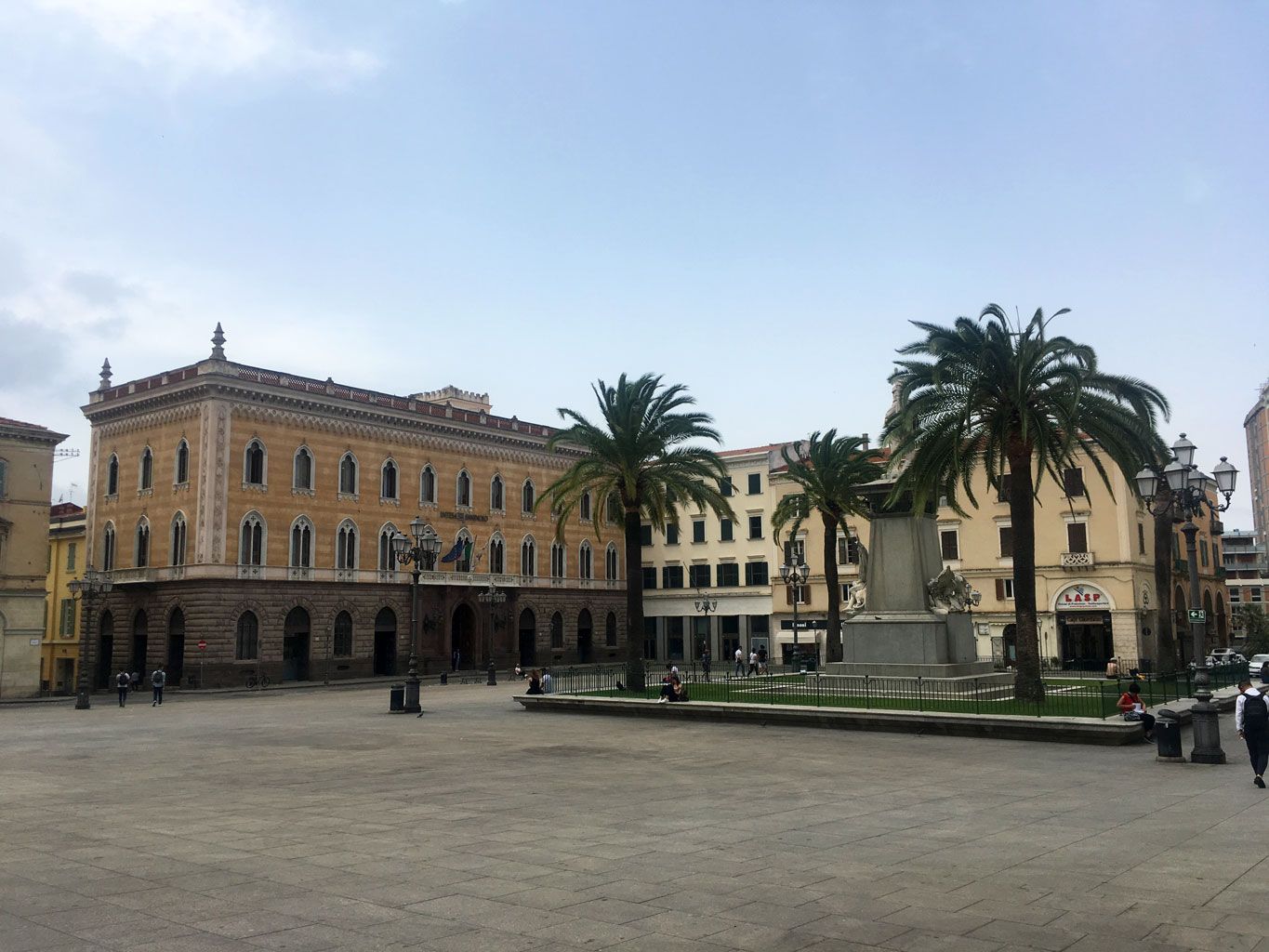 I’ve arrived early. Today I will be hosted by Maria Vittoria, met in Ozieri, but before going to hers, who will probably still be in her pajamas, I decide to go downtown and take a tour. I arrive from the north and immediately head to the historic center, still deserted. I ride through the narrow streets, which have something of the historic districts of Cagliari, or even Barcelona.

I arrive at the beautiful Piazza del Duomo (Cathedral of San Nicola) whose façade is always a pleasure to contemplate. Then I pass the beautiful Palazzo Ducale, and the Pinacoteca Nazionale, to get to Corso Vittorio Emanuele II, which I climb uphill for a while before taking some secondary roads. I arrive at the public gardens, large and well kept, I cycle along its beautiful cycle paths, and I stop at Emiciclo Garibaldi, a beautiful square in a semicircle, to have a coffee. 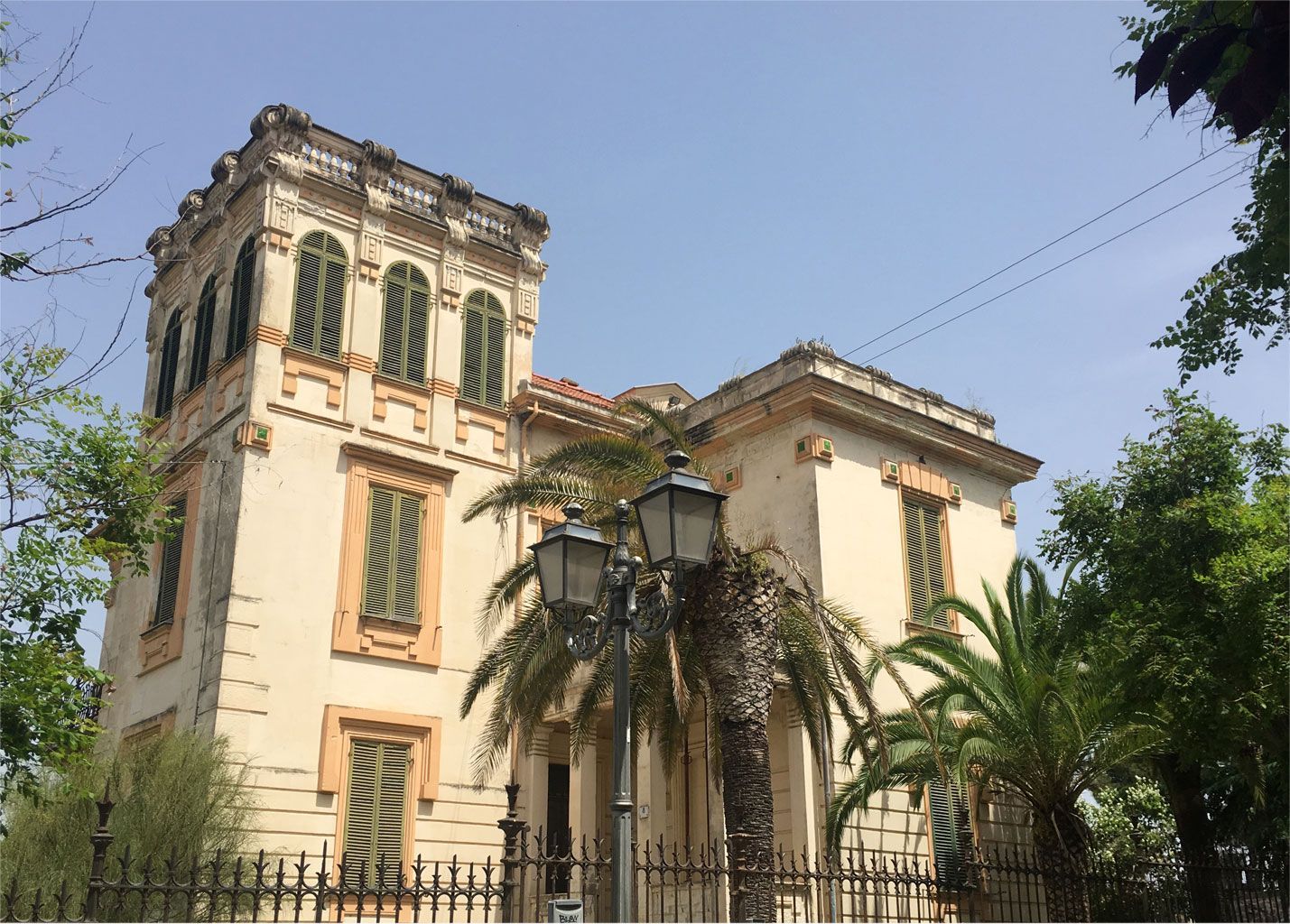 It’s a decent time to go to Maria Vittoria to leave bikes and luggage. I reach her house, right in the centre, very close to the Sanna Archaeological Museum, and once settled we are ready to make a nice tour. I know I can’t see everything of Sassari in one day, so Maria Vittoria made a selection of things that are worth seeing.

The first itinerary passes next to a series of beautiful and elegant liberty style villas, some inhabited, others now abandoned but nevertheless very fascinating. From here we then go up to the Piazza dei Capuccini, where the Luigi Canepa Conservatory of Music is located, and next to it the modern Teatro Comunale, where for several I have been part of the Orchestra De Carolis in some operatic productions.

We then descend towards the Market Square and cross the Rosello Bridge, which cuts just one of the already mentioned canyons, and we pause to observe from above the historic Fontana Rosello, dating back to 1600. 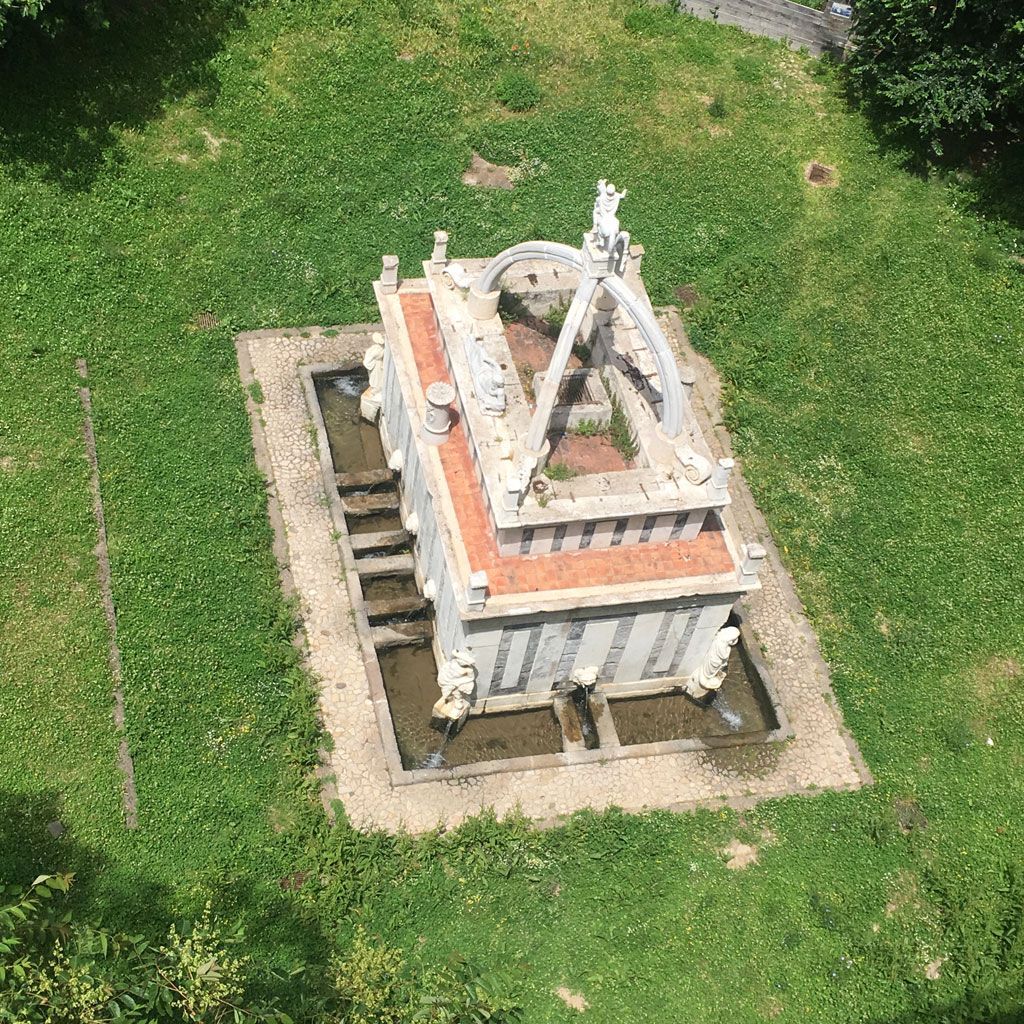 We go back to the centre crossing the Via La Marmora, called Carrera Longa, full of historic buildings. Here stands the beautiful Palazzo Cugia, a former home of the homonymous family, in Spanish Baroque style with beautiful wrought-iron balconies.

We arrive at the beautiful Piazza Castello, so called because it was once the site of an Aragonese castle, of which only the well preserved foundations remain, protected by a closed structure. On one side there are the headquarters of the important Sassari Brigade and then the arcades that lead to the splendid Piazza Italia, with the elegant palaces, above all that of the Province and the Palazzo Giordano in neo-Gothic style. We walk down Via Roma again and stop for lunch. 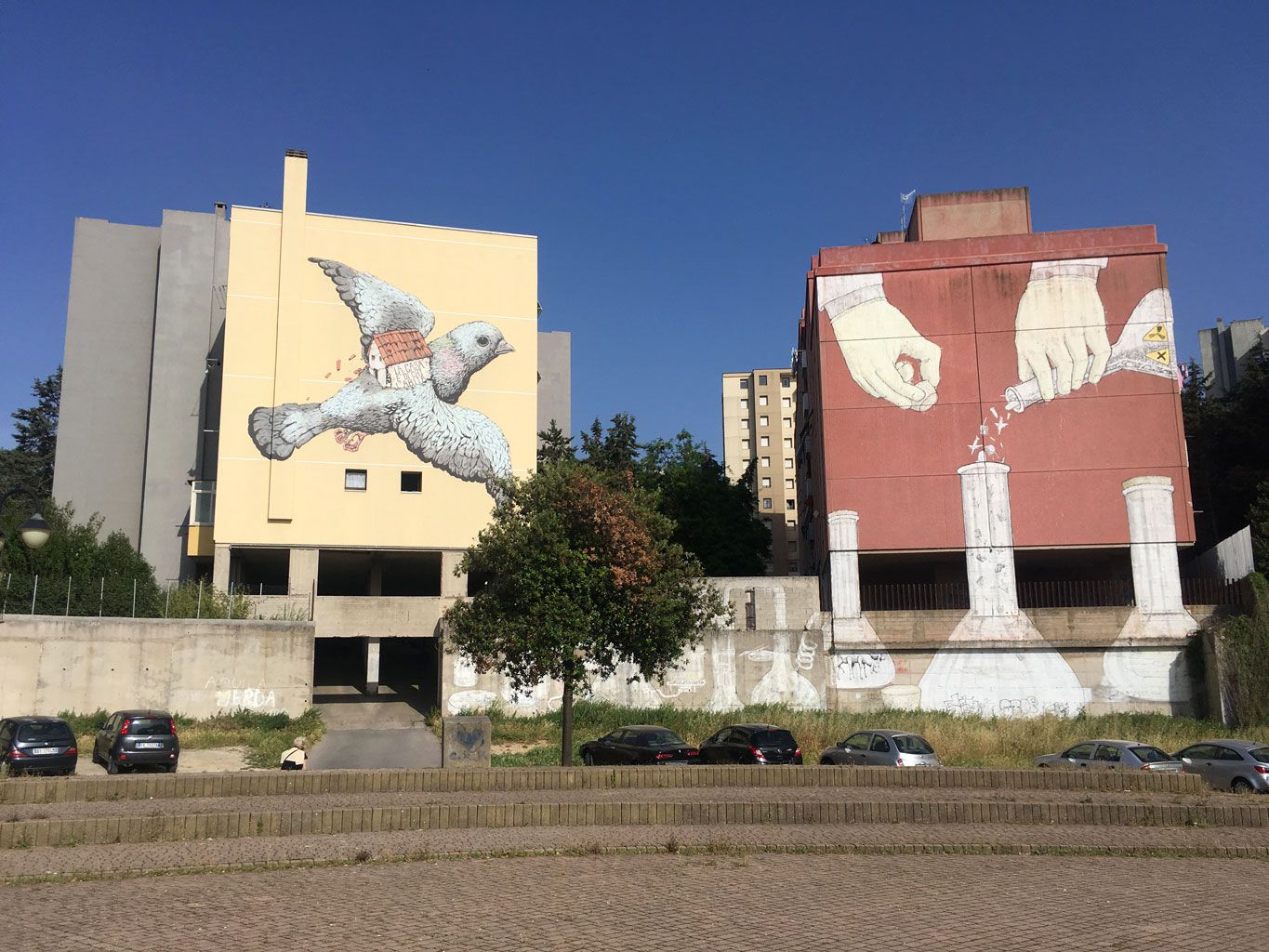 The afternoon itinerary is in the spirit of contemporaneity. Maria Vittoria takes me to Piazza Aldo Moro, a little off-center, to see some important murals created on the sides of some council buildings in 2012 by some important contemporary artists, Blu, Ericailcane and Moneyless.

Then we head back towards the center to meet Lorenzo Po, whose Facebook live streams are very popular, and who wants to interview me again after having done it a few months ago. So we have an aperitif in the central Largo Cavallotti, right outside the bookshop where I will shortly present the project and play.

The interview begins, live on Facebook. Meanwhile, the musicians arrive, Maurizio and Paoletto, with whom I have already played in Erula. At the end of the live stream we all move to the bookshop where a small and attentive audience listens to us. We end this beautiful day with a walk in the centre, through the orange-lit lanes, and we stop for dinner in the beautiful Piazza Tola, which is overlooked by beautiful buildings that once belonged to the Sassari aristocracy. 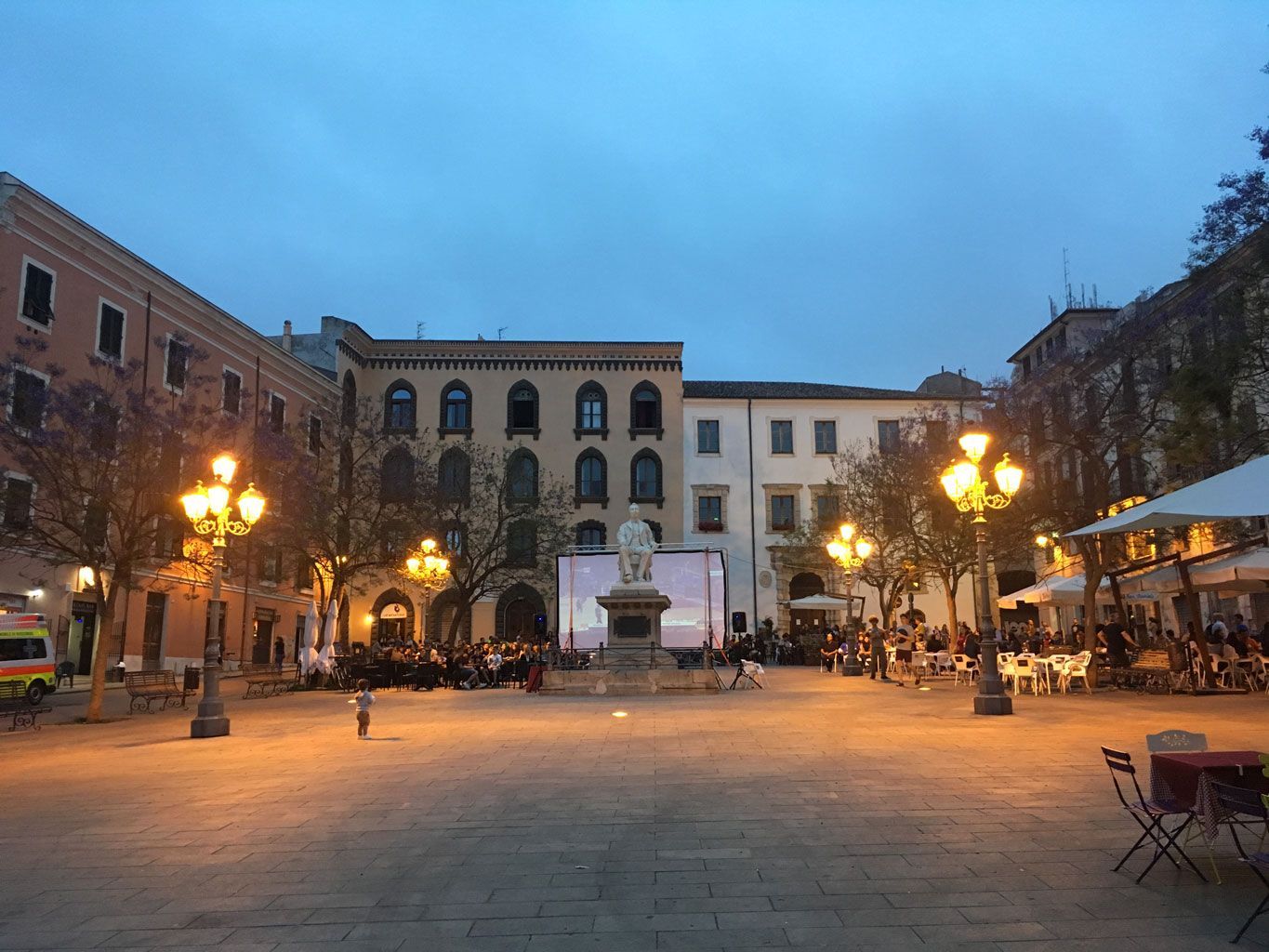 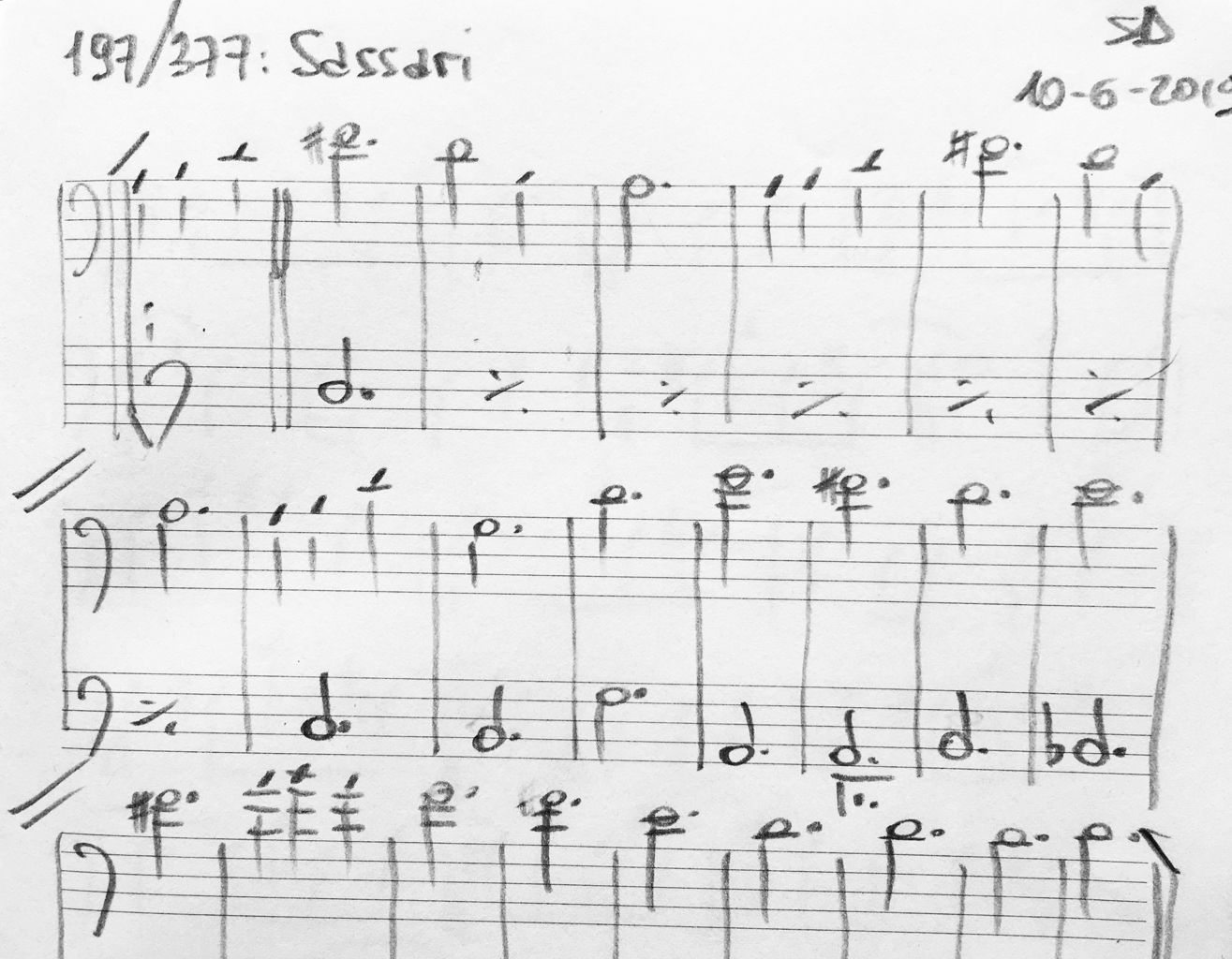 Some time ago, in one of these short novels I spoke of the “great absentees” of the territories I visited, places, monuments, archaeological sites that, due to matters of itinerary or time, I was not able to reach. And a city like Sassari adds a lot to this list of places that I plan to visit one day, especially in the naturalistic and archaeological fields (not to mention all the civil and religious architecture, palaces and churches of the historic center.) The municipality of Sassari is the largest municipality in Sardinia. Its territory includes a lot of coast and beautiful beaches. In addition to the inflated Platamona, to the north, the territory extends to the west, towards the plain of the Nurra, and the west coast between Alghero and Stintino, where there are two beautiful beaches, the Argentiera and Porto Ferro. In Nurra there is also the only natural lake in Sardinia, Lake Baratz, around which an important fauna oasis develops. Finally, among the archaeological sites I wanted to visit, there is pre-nuraghic sanctuary of Monte d’Accoddi, just outside the town, very original for its structure resembling the Mesopotamian ziqqurat. I will visit all these one day.