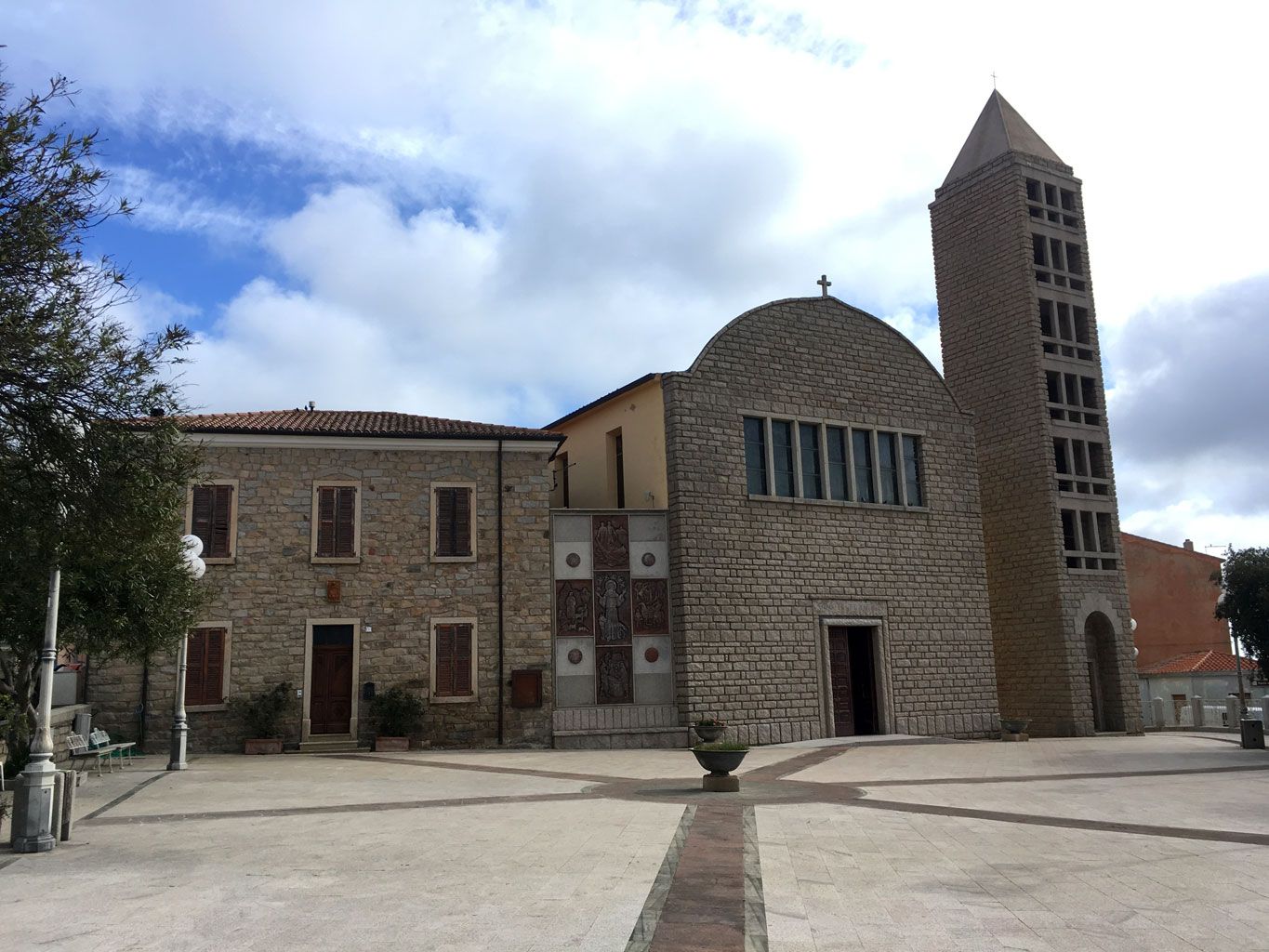 Today again, a day of strong mistral. And today again I have a lot of kilometers to grind under my legs. I cycle along the coastal provincial road until I reach a long straight lined with pine trees, and beyond the Rena Majori beach. I follow a path and, after leaving the bike, I pass the majestic sand dunes and then reach the beach, beaten by strong waves. 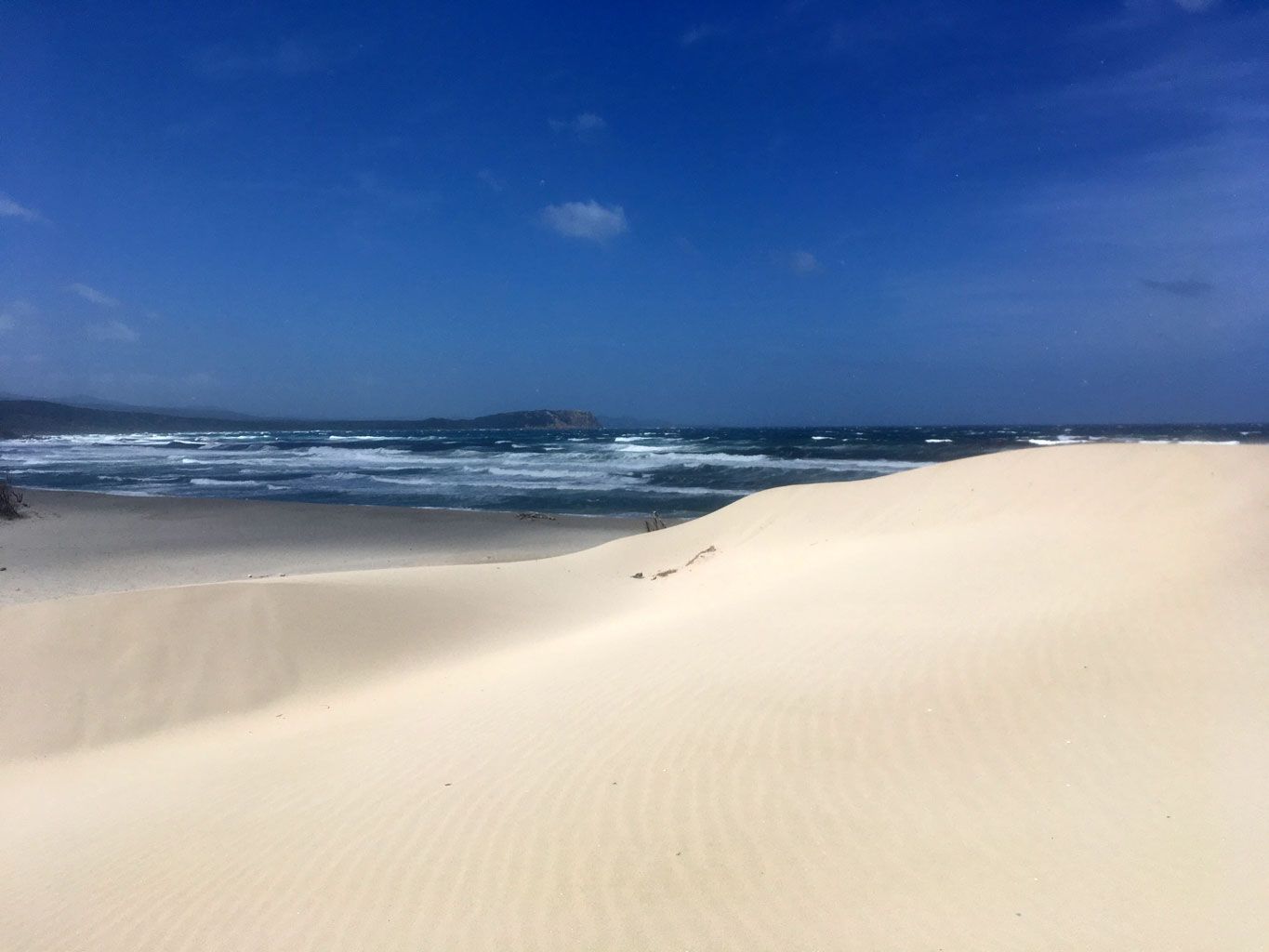 I continue passing the Monti Russu cape, and arrive in Vignola Mare, a seaside resort town. Here I stop at the bar in front of the beach for lunch, I work, admiring the waves and the many surfers and kite surfers enjoying the wind. The municipal councilor Francesca, whom I met at the presentation of the book in Santa Teresa di Gallura, took care of my hospitality and will join me later. In the meantime, she recommends what to see in the area. 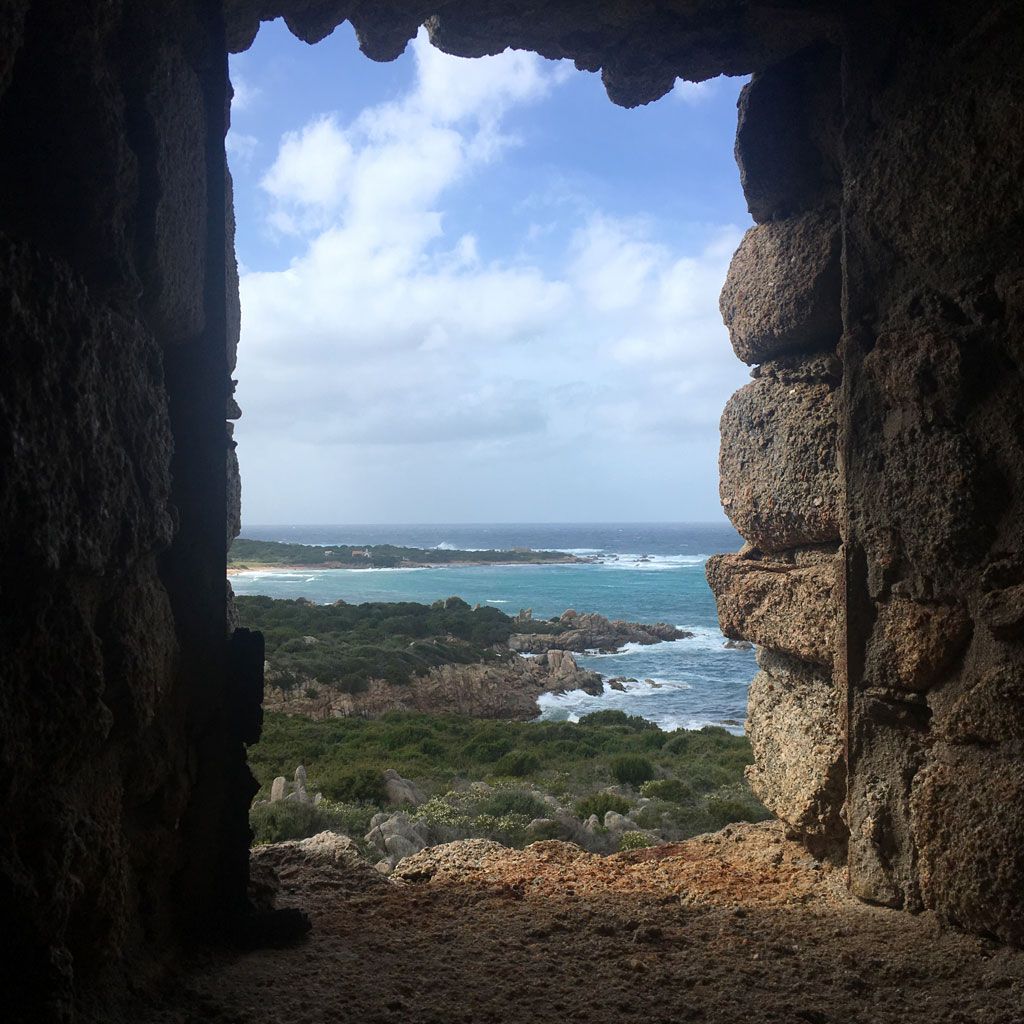 I leave my luggage in custody, and take a bike ride around. I go to see the Spanish Tower, which can be reached from the beach in summer, but now I have to cycle for several kilometers because the Rio Vignola that flows here is too full and cannot be crossed on foot. Here, among other things, are the remains of a Roman bridge, and the area must have been a tactical landing place for ships. 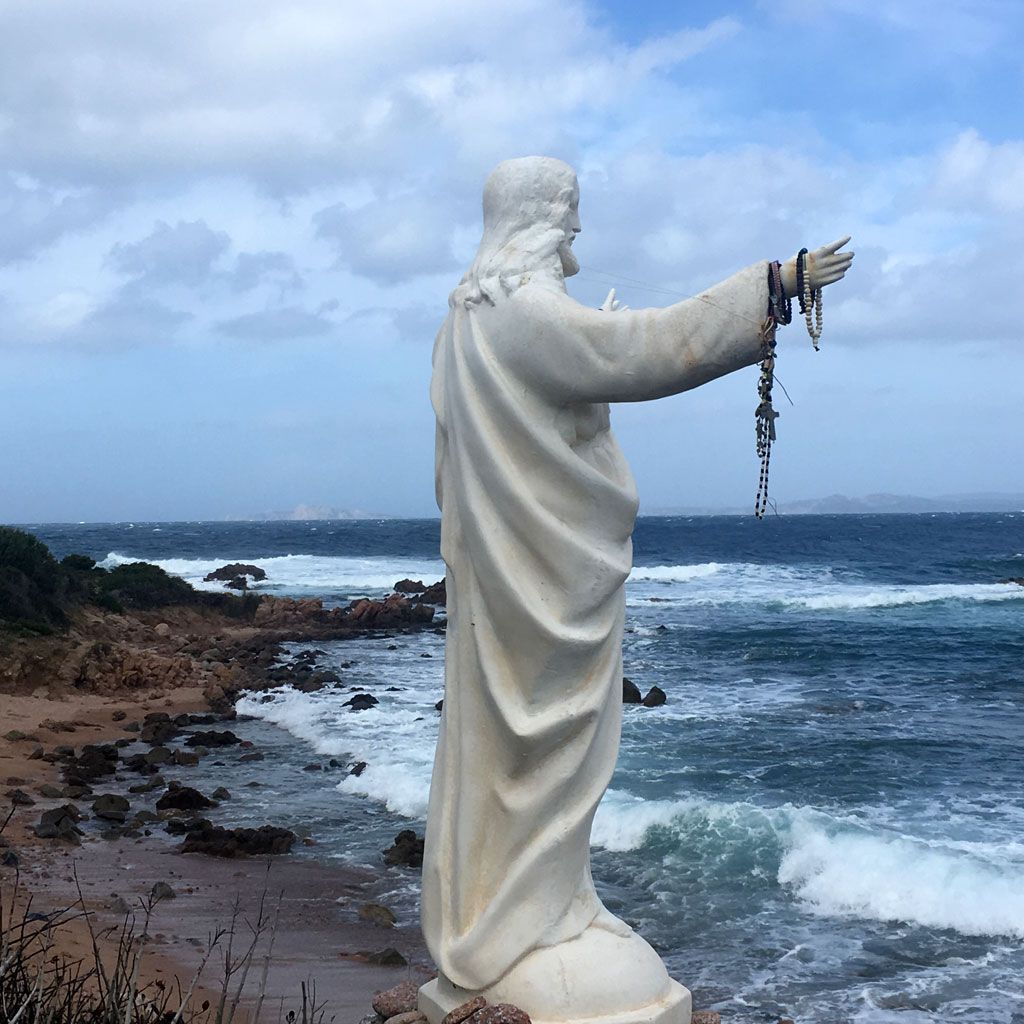 I take this opportunity then to go first to the Church of San Silverio, patron saint of fishermen, right on the cliff. In fact, in this municipality like in others nearby a fishermen’s community arrived from the island of Ponza, and in Vignola Mare they were given land to build the church. From here I then arrive at the tower via a path, and once up to the top I admire the whole coast, the beach and even Corsica. 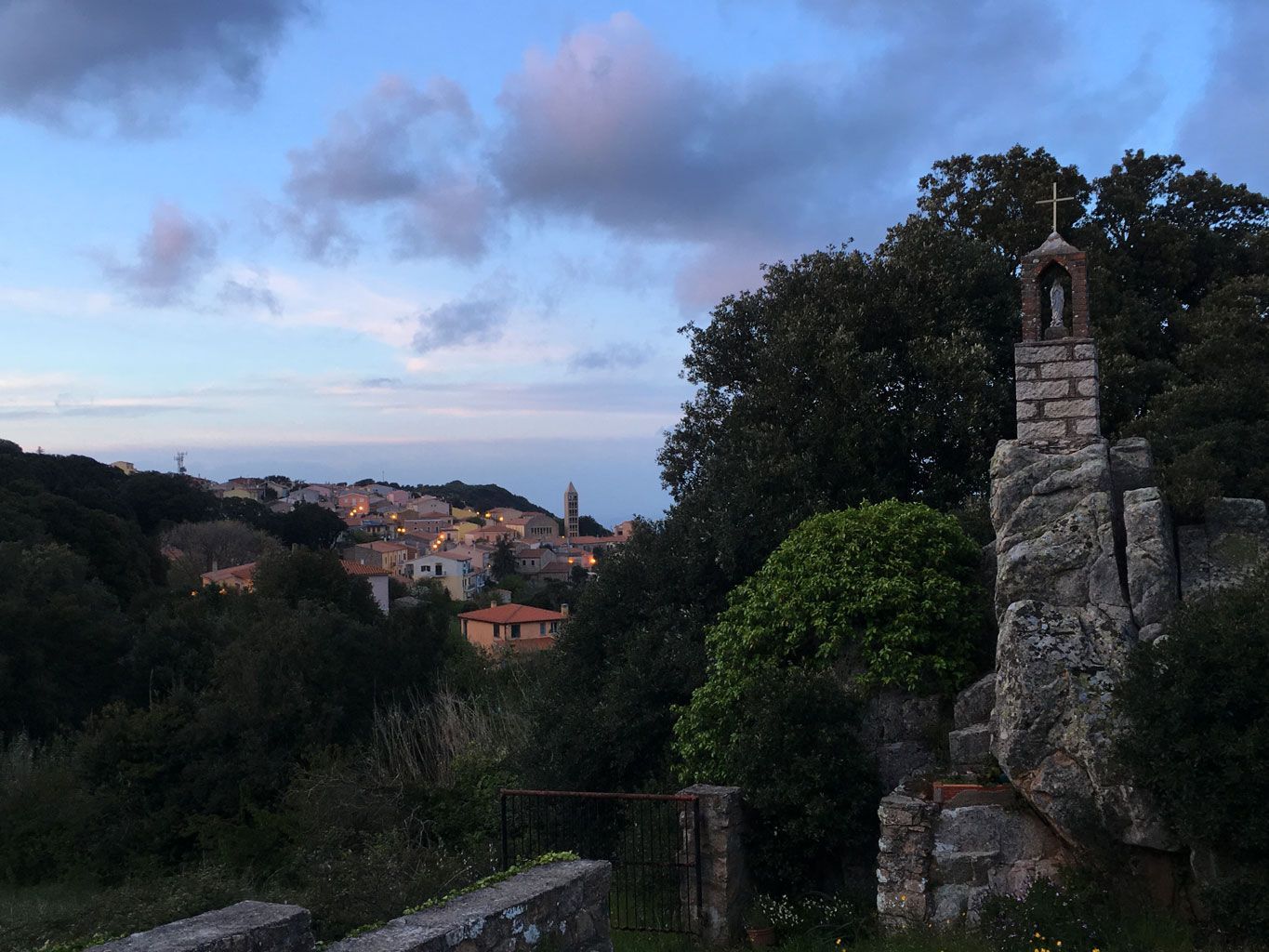 It is evening. I pick up my luggage and start the long climb to Aglientu, with the typical Gallurese granite landscape. When I arrive, I make a short tour of the village, to admire glimpses of granite houses, the beautiful central square with the granite church of San Francesco, and I go up towards the high area, with an ancient fountain. It is said that the name Aglientu could derive from the silvery flashes of spring waters, which are very abundant here. 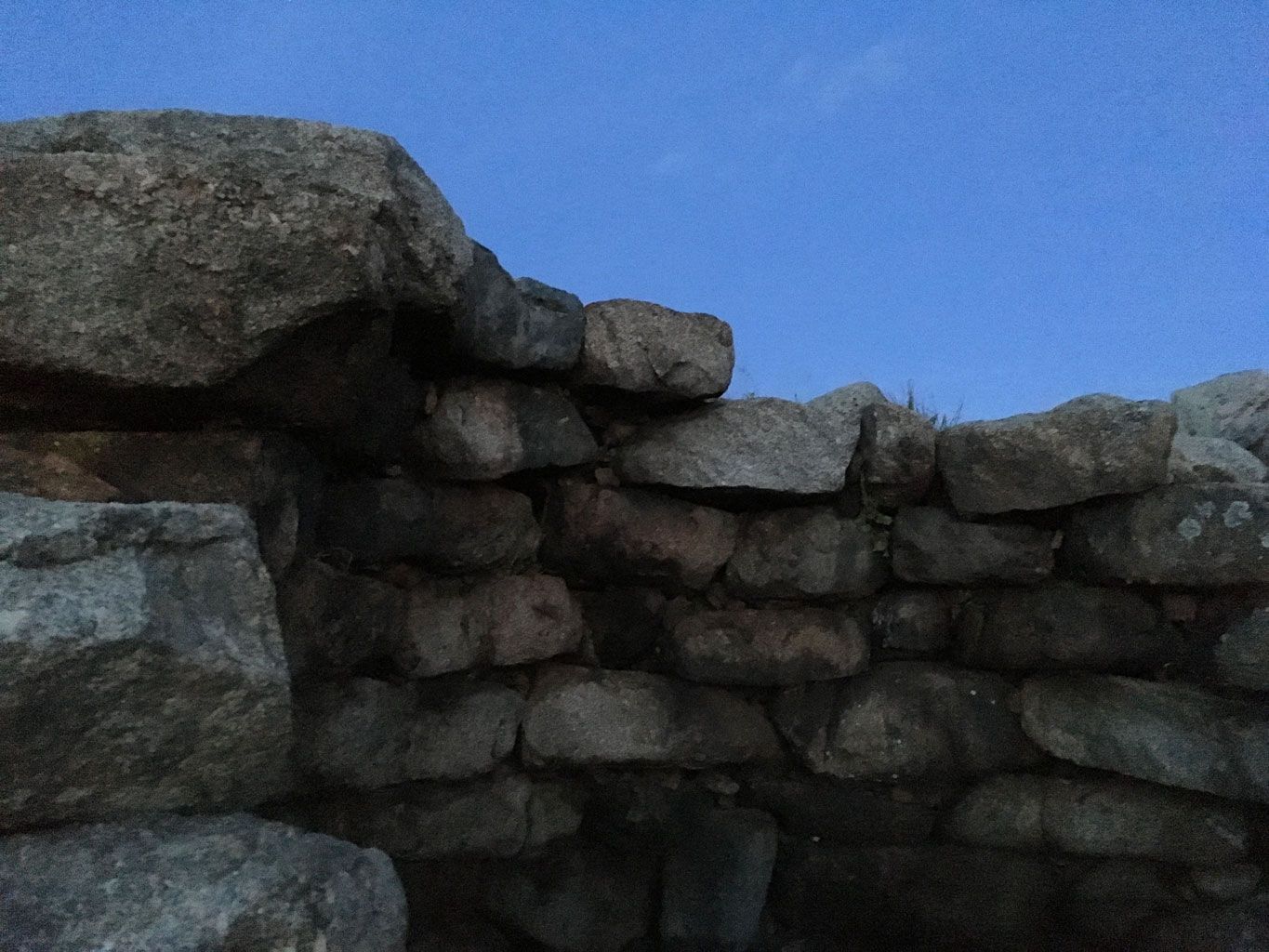 Francesca joins me, I leave my bags in her family home, she takes me to see two beautiful viewpoints, one from which you can see the whole town, the other from which you can see the whole territory to the coast. I had no idea that this part of high Gallura was so high and yet so close to the sea. We drive along the road that descends towards the coast, while Francesca tells me about the area called Portobello di Gallura, where among the first built houses there was that of Fabrizio de Andrè’s father, still property of the family.

It’s getting dark but Francesca is keen to show me the Nuraghe Tuttusoni, to be added to my series “visits in the dark”, but I must admit that it’s worth it, the granite boulders that compose it are immense and from above the view is awesome. All around the area is full of nuraghi, and actually one I saw it this afternoon, with a flag of the four Moors (Sardinian flag) planted on it! We conclude the evening near here, at the Nuraghe Tuttusoni farmhouse where they are waiting for us for dinner and where Domenico, the environment councilor, also joins us for an evening of good food and conviviality. 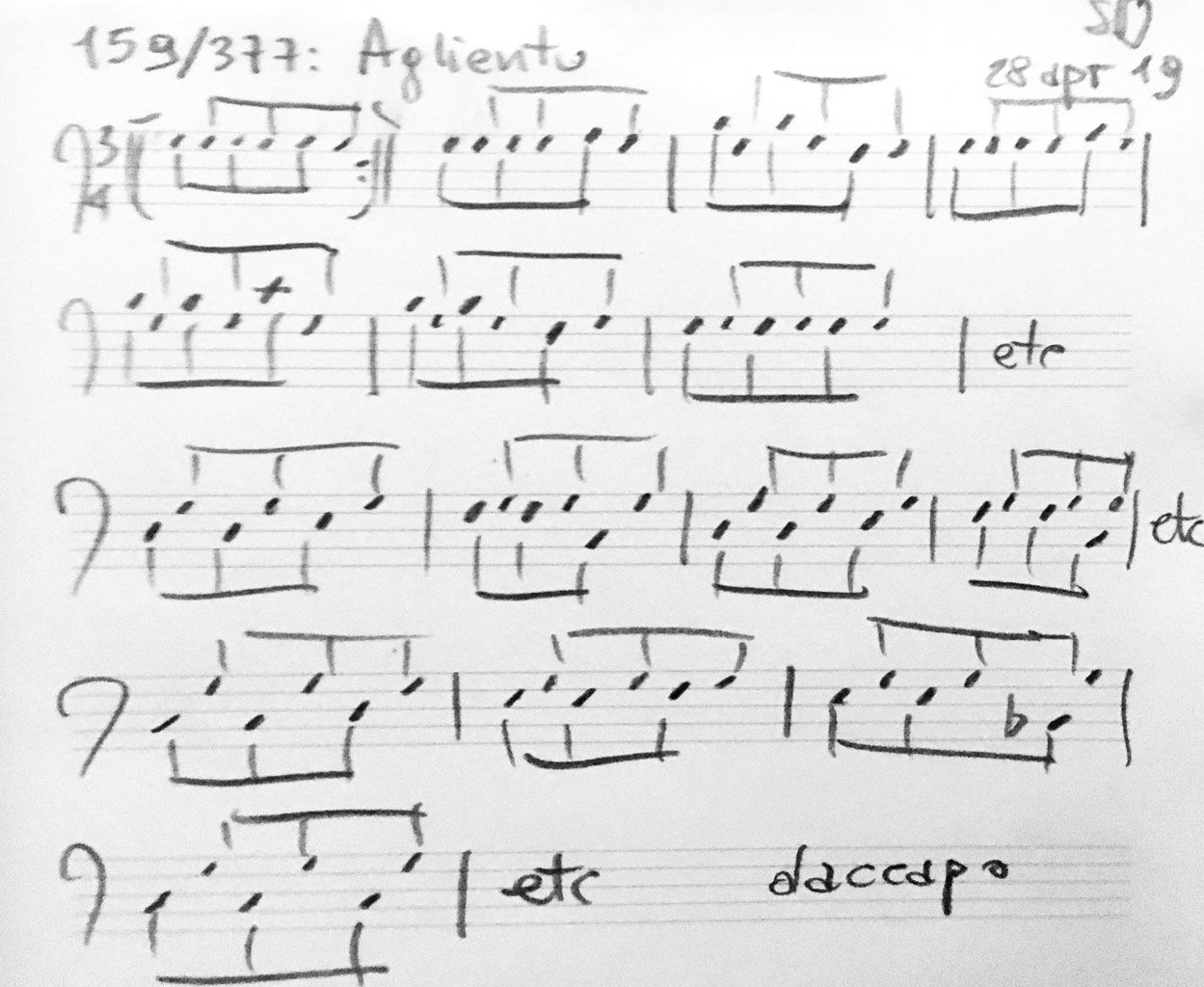 In this journey I often hear about people who have traveled around the various municipalities, some for one reason or another, travelers, artists. One of these is Nicola Serra who practices parkour, the discipline born in metropolitan France in the 1990s that consists of jumping obstacles by doing acrobatics. A few years ago Nicola toured (all?) the municipalities of Sardinia, traveling by train or by bicycle. In each he was taken to places of interest to make real performances, regularly filmed and edited to constitute a catalog of videos that somehow promote the territory, from his point of view, that of a performer. Somehow I find some resemblance to my project, to see the villages of Sardinia with an artistic lens and for everyone to come up with something creatively unique. All of Nicola’s videos are visible on YouTube. And from what I see it has gone beyond Sardinia, and beyond Italy!