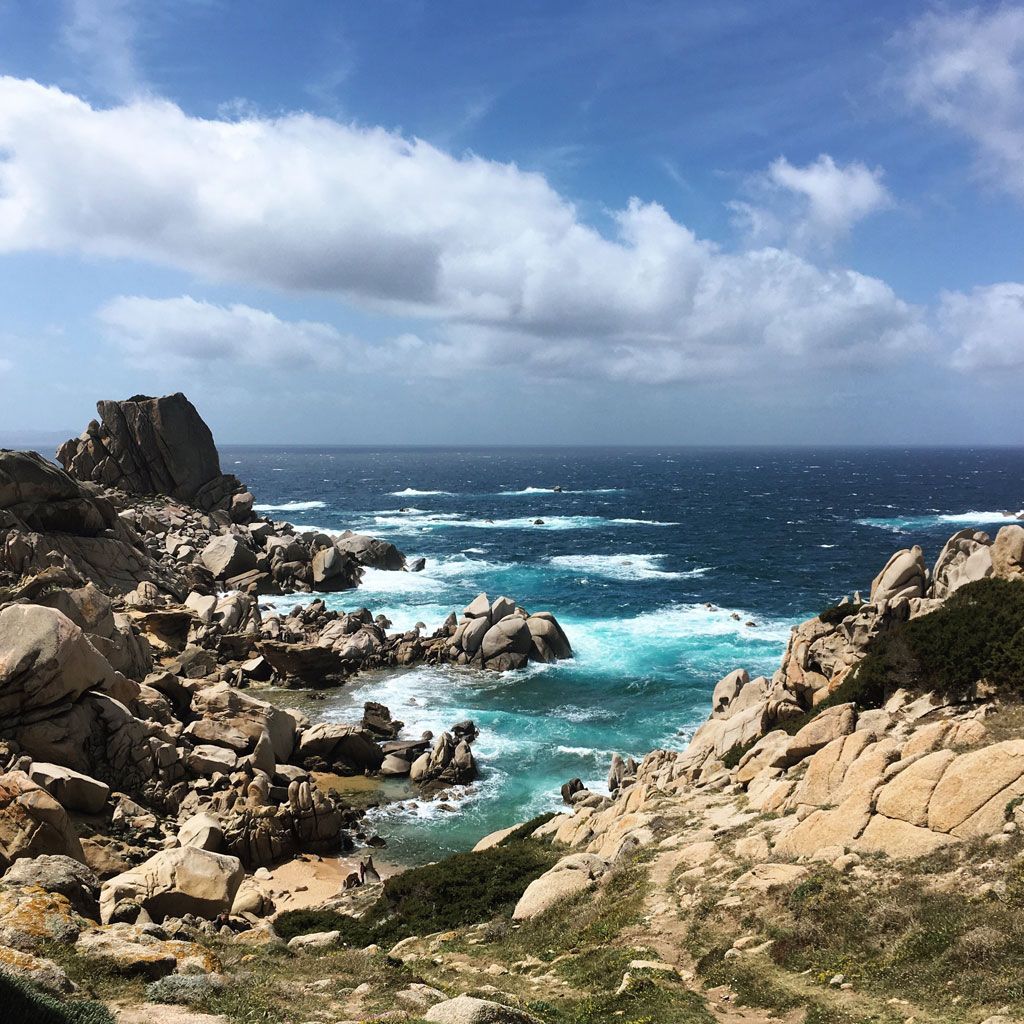 I take the ferry from La Maddalena to Palau, where I meet the French tourists I met yesterday at Trinità beach. The wind has increased a lot, and my route, very long, is all in a north-west direction, exactly against the mistral. So I have to work very hard, without enjoying much of the trip, but being careful not to be thrown away by the wind! 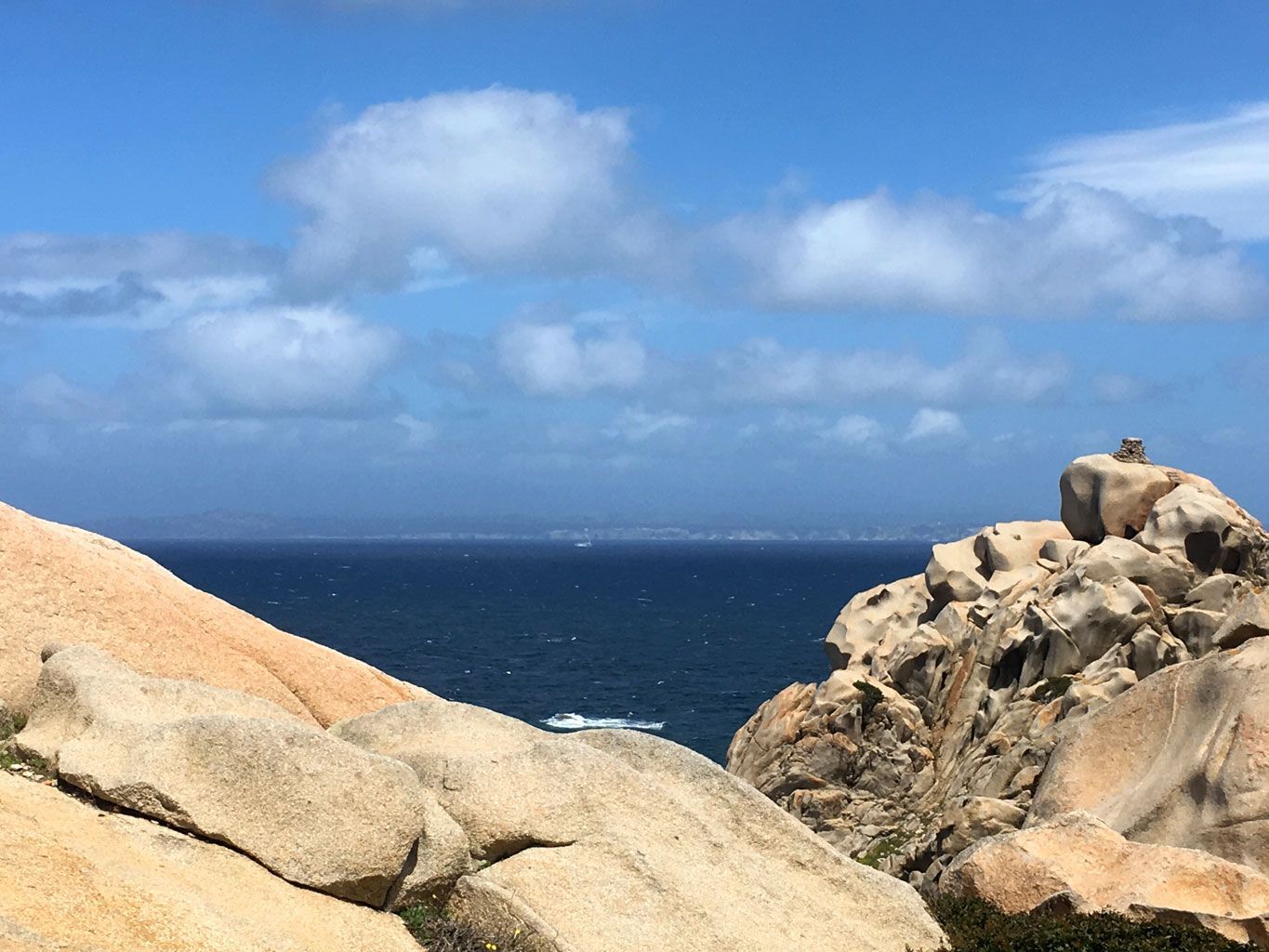 I arrive in Santa Teresa and head to the central square, where two Stefanie, the councilor for culture and an archaeological guide, welcome me. After a coffee, and arranging my things in the hotel, Stefania the councilor and I go to Capo Testa. The wind is very strong but the effect is incredible, the sea breaks on granites rounded by atmospheric agents. In front of us the white cliffs of Bonifacio, France, the 377 project looks abroad! We are at the lighthouse, whose structure we climb to admire the beach of Cala Spinosa below us. Then we move by car to get to the entrance of Cala Grande, better known as “Valle della Luna”, where a colony of hippies lives. We walk for a while between the granites and the vegetation, and we reach the valley even if there is no trace of hippies! 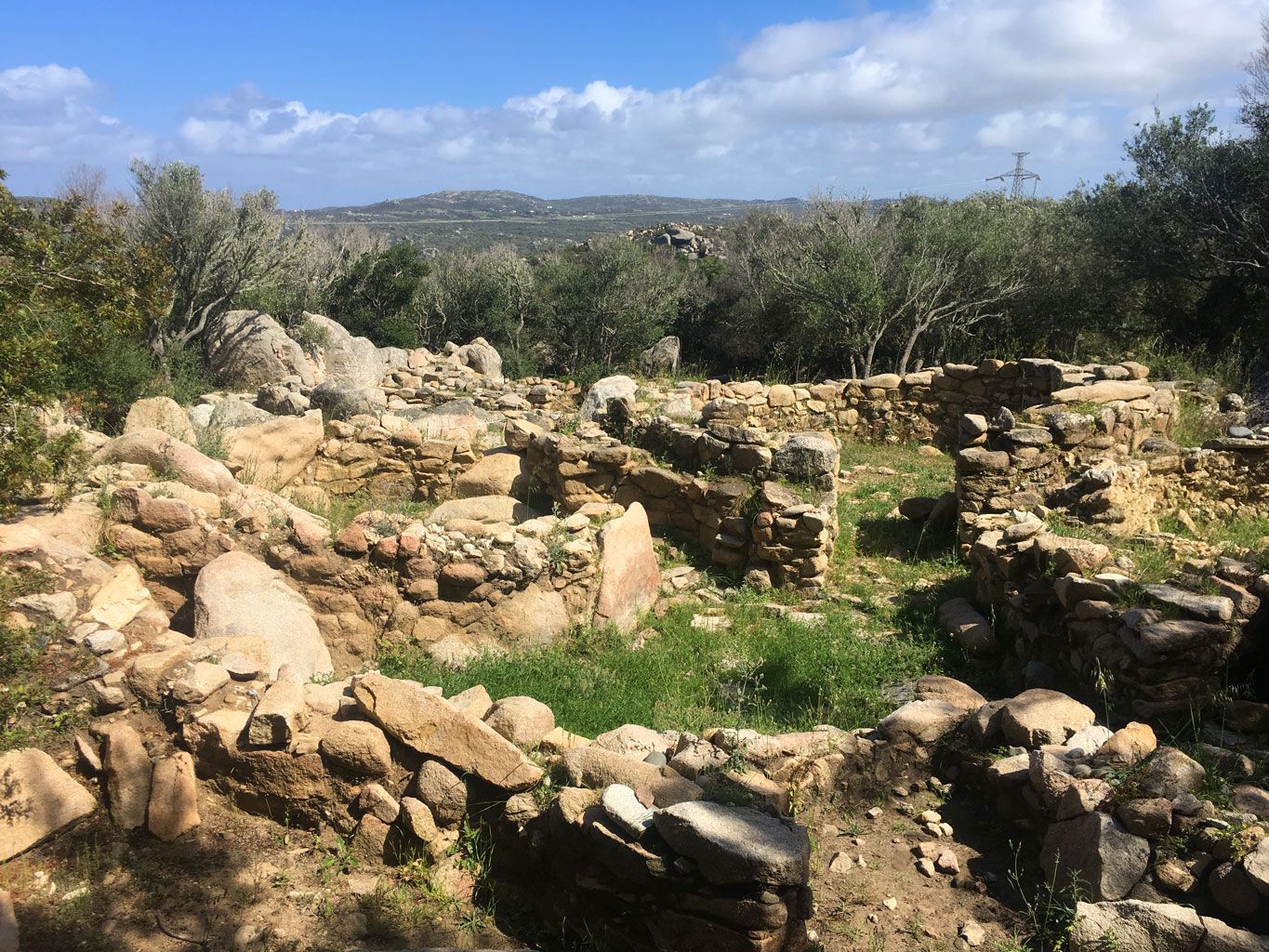 After lunch the other Stefania, who is part of the CoolTour cooperative that manages the archaeological site of Lu Brandali, comes to pick me up. On the site there is a museum, which houses some exhibits and multimedia information stations, also equipped for the disabled, who can have a direct tactile sensory experience on the material. Then we head to the actual site, which contains a three-lobed nuraghe planted on the rock, the huts all around, some very well preserved, and a tomb of the giants, the only one where human remains were found, which testify the way in which these types of burial sites were used. 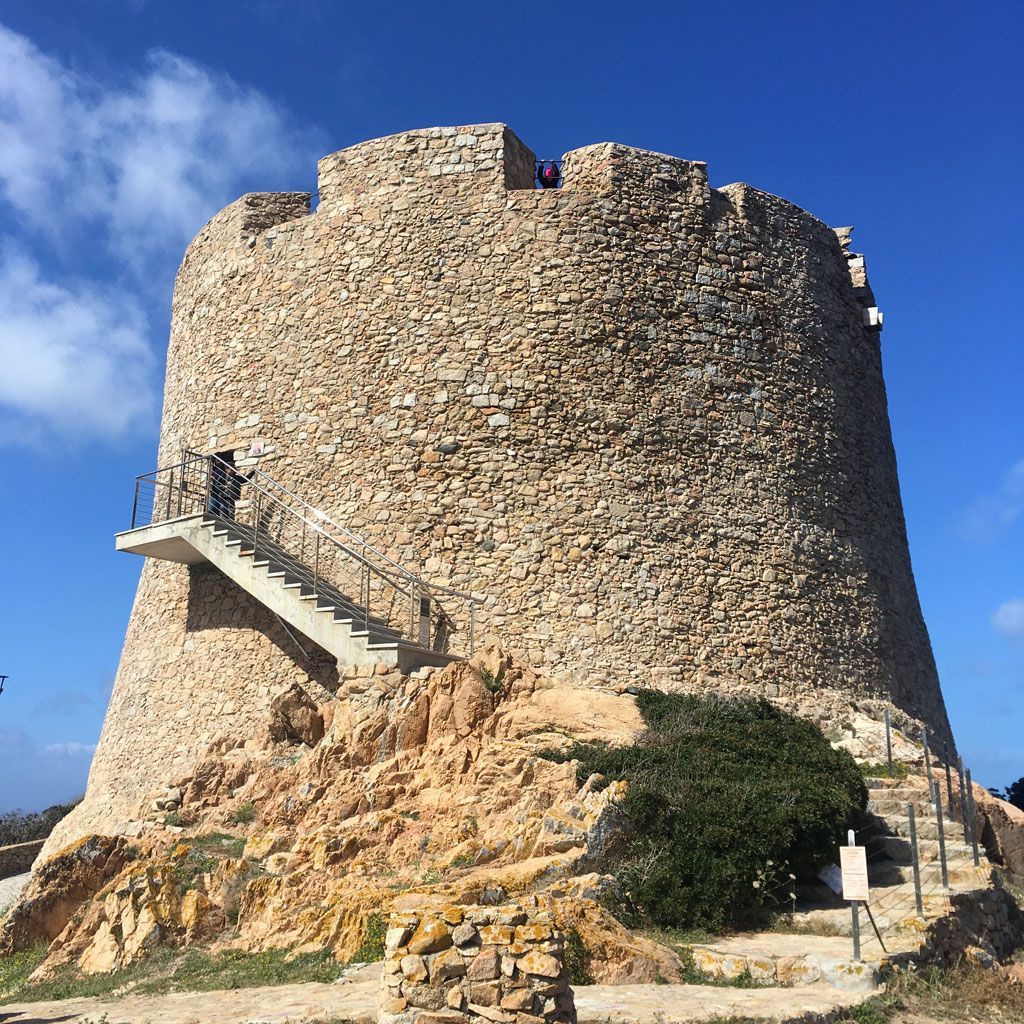 Upon returning to the town I meet again councilor Stefania, and we take a tour of the streets, which are animated by the stands of the PIG event, Primo maggio In Gallura (May Day), culinary stands, wines and various products. We walk among the houses of the old area that was once the fishermen’s district who came here from the island of Ponza (as I have also seen in Golfo Aranci). Then we reach the famous tower of Longosardo (the old name of Santa Teresa), at the base of which there are still old cannons. From above the tower I can admire the entire inlet, with the remains of a castle on one side, and at the bottom of which is the marina. Ferries to Corsica leave from here. And from here, back in 2007, for three days during the Musica sulle Bocche Festival, created by the musician Enzo Favata, I left on the ferry to play during the crossing to Corsica with Alessandro Garau and Gianluca Corona. Distant memories that come back to mind! 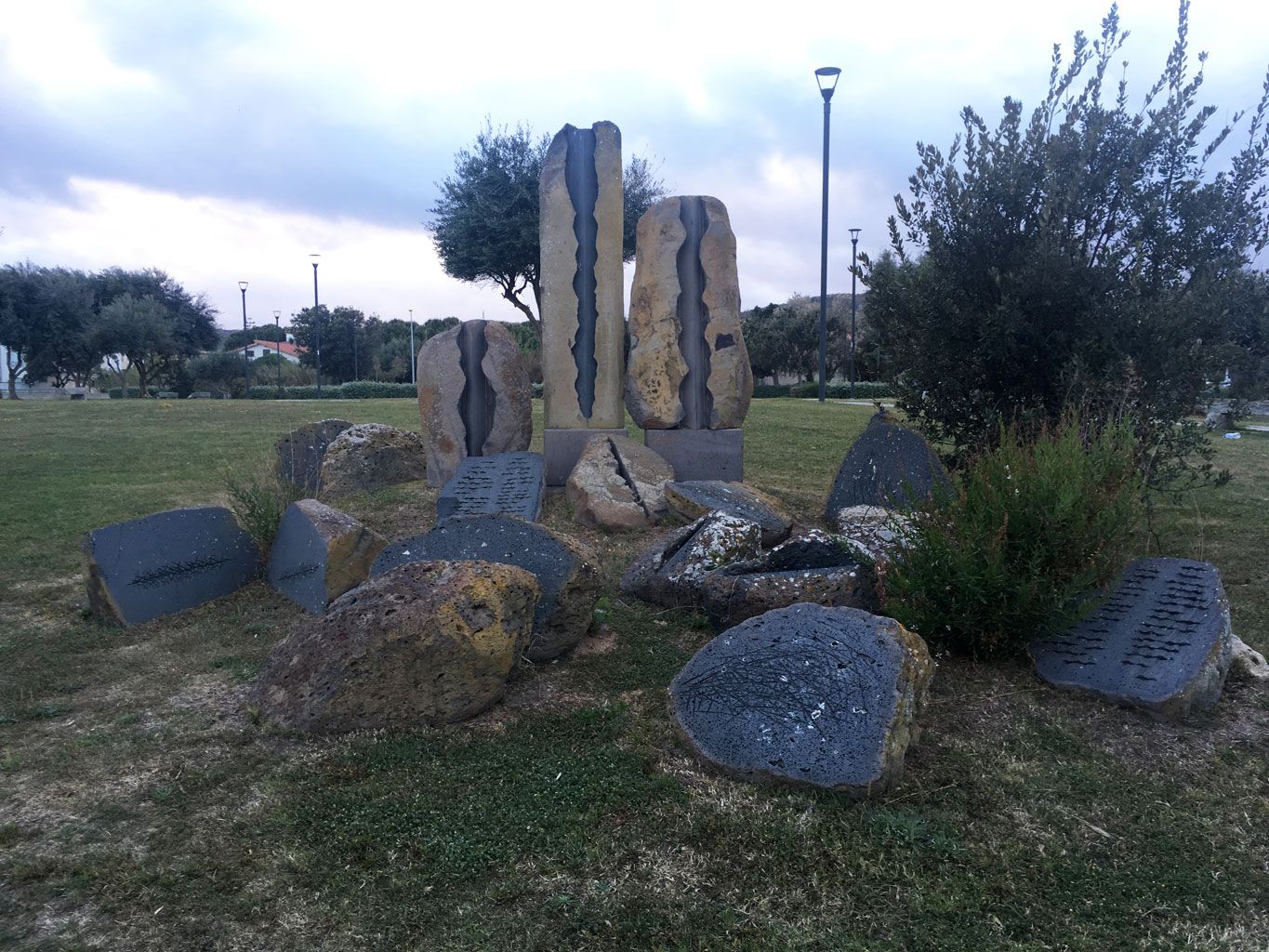 I go back to the hotel to pick up the ukulele and head to the Nelson Mandela cine theater, passing by a square containing some sculptures by Pinuccio Sciola (ubiquitous with his work in many villages in Sardinia). The presentation of a book by the local writer Rino Solinas takes place at the theater. I asked to be able to participate by playing a tune, and so even today I managed to contribute to a cultural event! 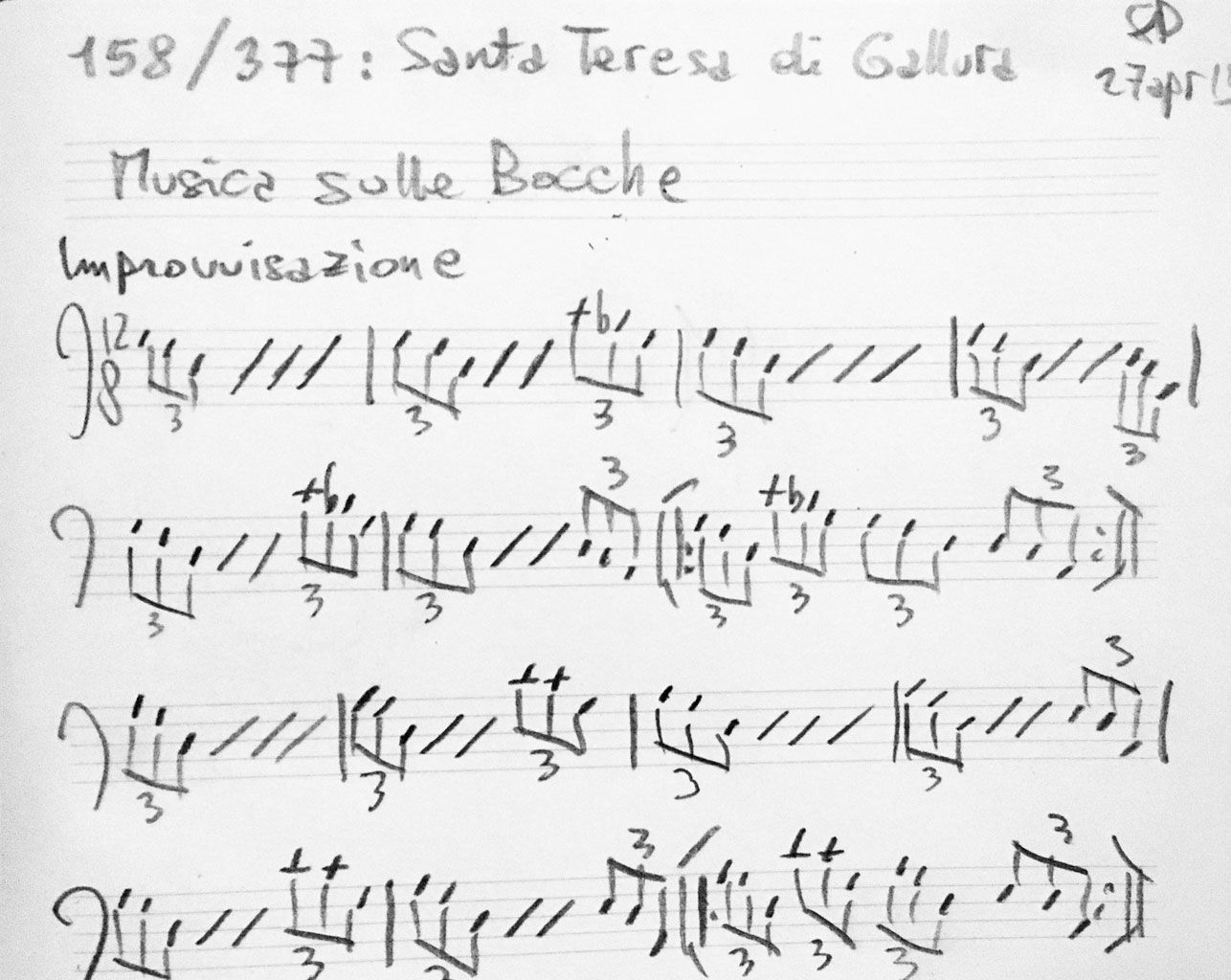 Nelson Mandela Cine Theater. Rino Solinas presents ‘The bells rang as a flock’, a historical novel that tells a true story of which I was not aware, and perhaps not many are. In 1911, in Itri, in the province of Latina near Rome, there was a massacre in which some Sardinian workers who worked on the construction of the railway line died, during what was a real lynching of the ‘foreigners’ by the local population (supported by the authority) against those who ‘stole jobs’, to the cry of “to death the Sardinians”. The surviving Sardinians were driven away with a sheet of paper and sent back to Sardinia.

Among the interventions of the evening was that of the councilor for culture Stefania, who read us a passage by Gramsci on indifference and its negative effect on events. And then the intervention of the mayor of Pattada who makes us reflect on an event that was fundamentally a war between the poor, between the last (the Sardinians) and the penultimate (the Itranis). “Itranis first, then Sardinians” was said during the protests. All this is very much heard today in other forms. Exchange “Itranis” with “Sardinians” and “Sardinians” with “extra-comunitarians” and that is what we are witnessing today, another war between poor, between last and penultimate… or, as the author of the book points out, between the last and the last.