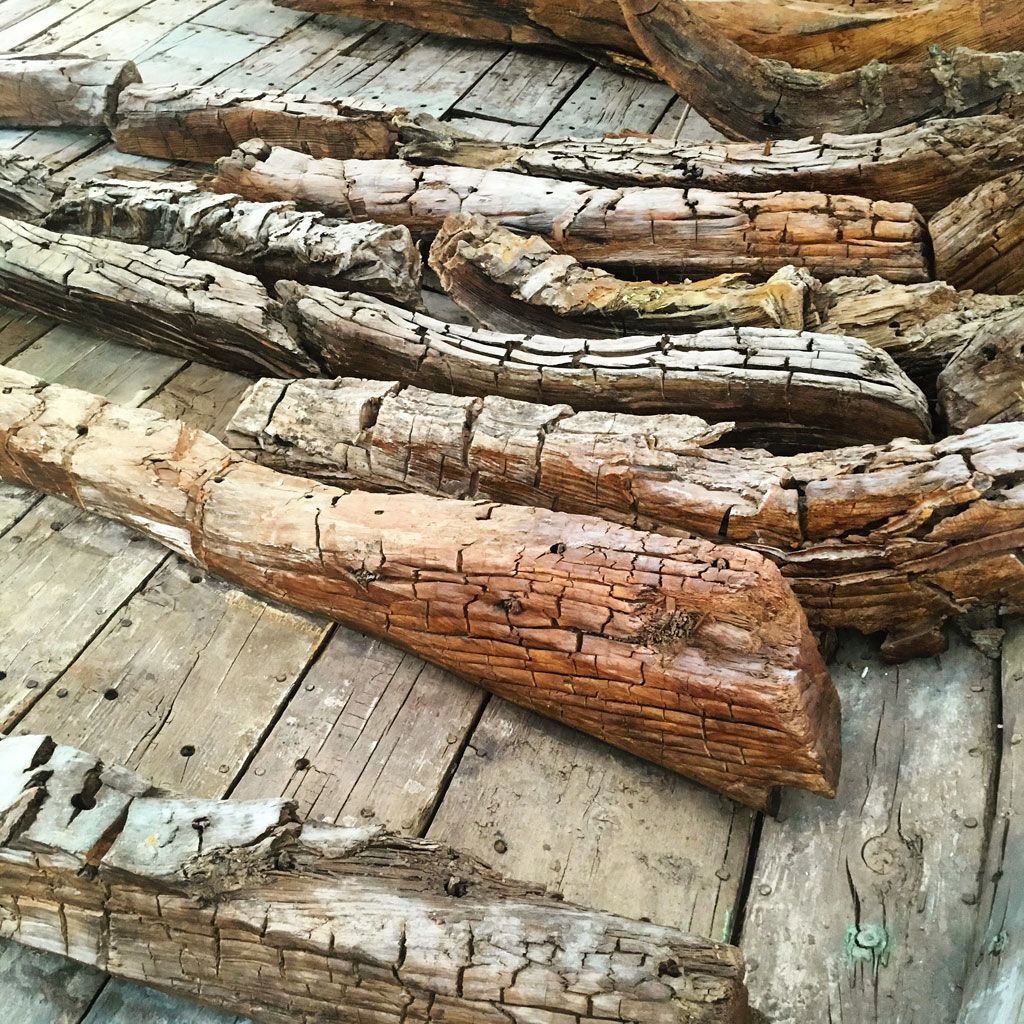 I’m approaching a big city. You can feel the energy, already on the roads, especially the traffic on the 125 state road. I pass next to the airport and after crossing huge junctions and roundabouts I enter the city and arrive at Selenita’s home, who will host me for today and also for the days around Easter when I will stop. I decide to split the things to do and see here over a few days, so as to take it easy, rest a little and work on the blog. And this is the schematic report in random order of activities:

– Greeting to the staff of the Municipal Tourist Office

– Greeting to the Library staff

– Walk through the beautiful historic center, narrow streets, renovated houses, the Saint Paul’s church, some remains of Punic walls, and a visit to the church of San Simplicio and the beautiful Necropolis below

– Visit to the Archaeological Museum, where I learn the rich history of Olbia and admire the remains of Roman ships found during work in the gulf area 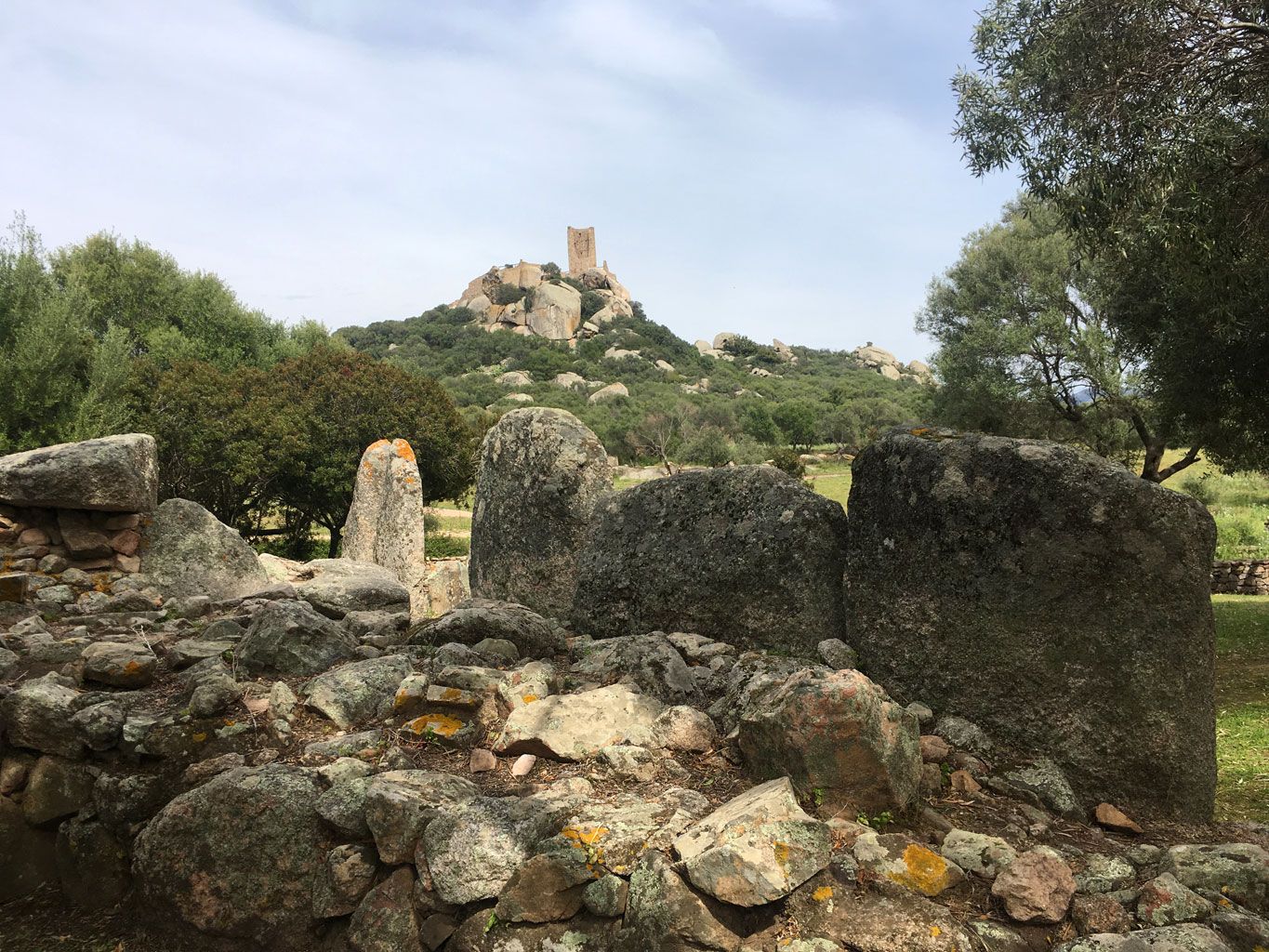 – Visit to the Castle of Pedres, from where you can admire a beautiful view over the entire plain and the gulf of Olbia, and visit to the nearby tomb of the giants Su Monte ‘e s’Abe

– For the series “visits in the dark”, night visit (and under the rain) to the beautiful sacred well Sa Testa.

Then there are things that need a little more words: 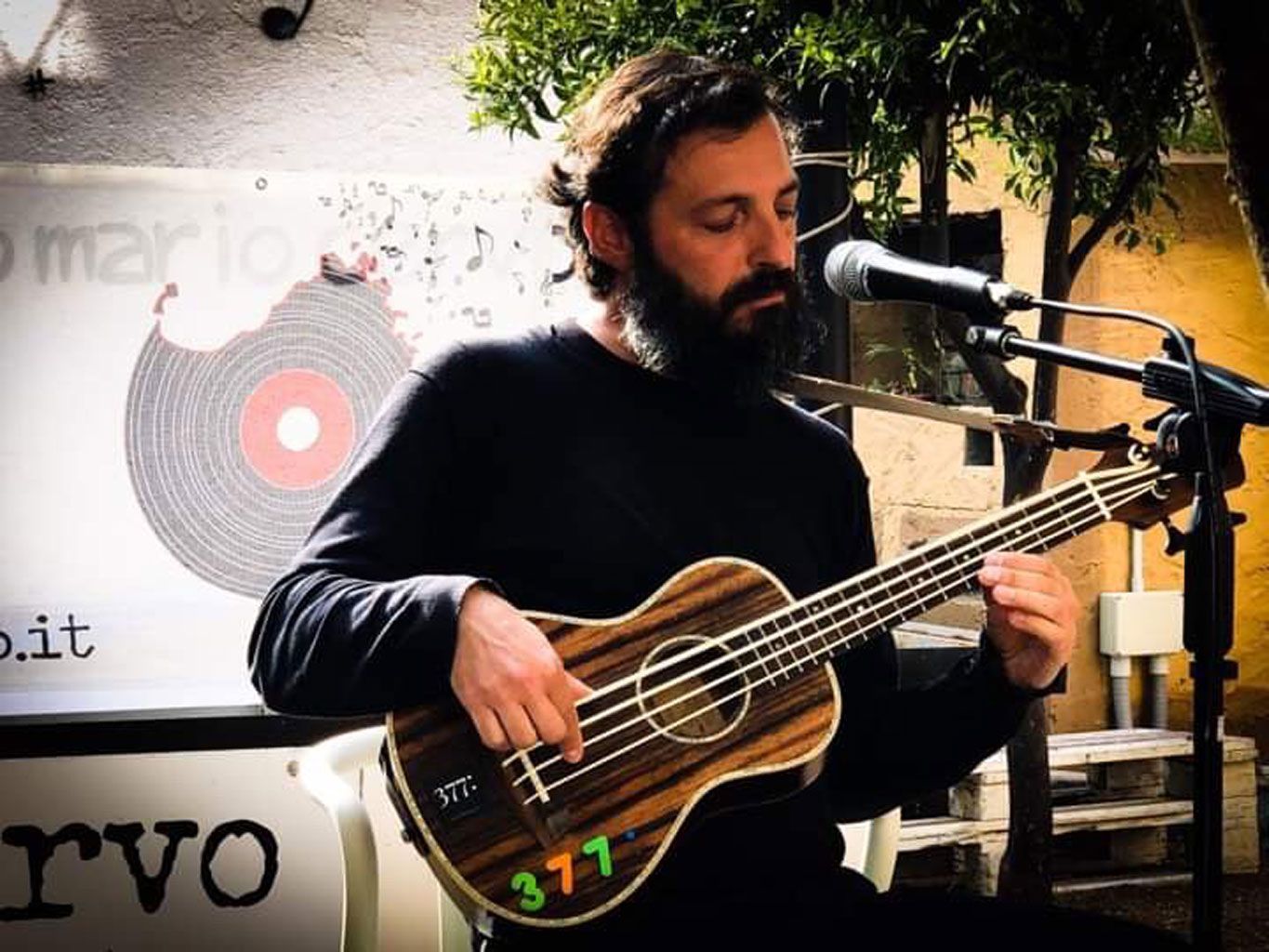 The Mario Cervo Archive is a beautiful structure that houses a precious collection of musical (and non) Sardinian material. In fact, the Cervo heirs are slowly gathering all the Sardinian record productions. Here you will find real rarities especially in vinyl, and the archive grows thanks to many donations. It is precisely here that I was invited to present my project, and finally I meet Tommy Rossi, who, for months now, has been interviewing me every week on his program ‘Morning with Tommy’ on Radio Supersound. Among the audience a few well-known faces met in some other stages of this trip, a cousin who lives in Olbia, and people interested in listening to my story and to some songs with the ukulele. And during the closing aperitif, new meetings that can be useful for the rest of my tour. 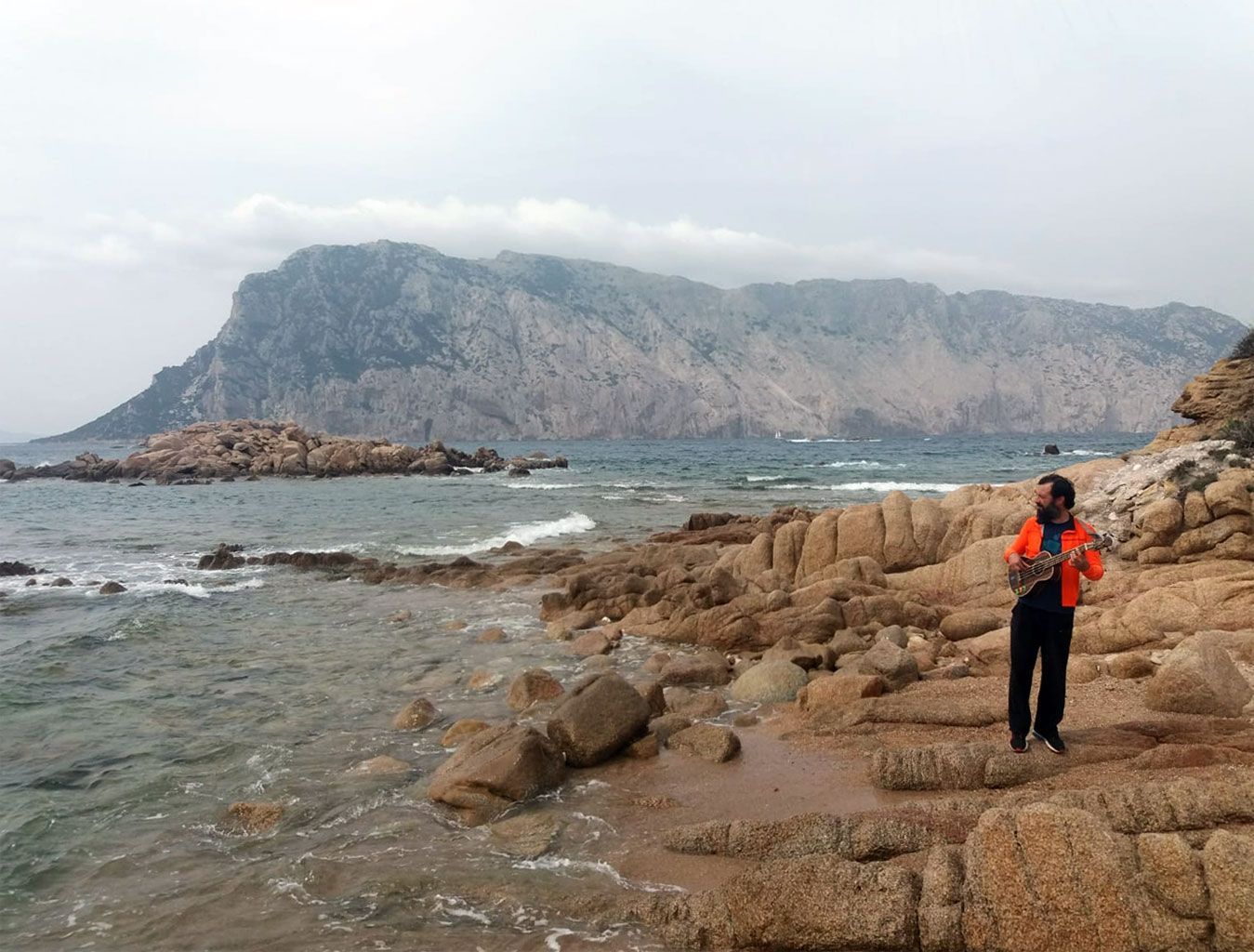 Trip to the Island of Molara. Diego, Caterina and Cristian are part of the Molara Association, which takes care of the island and organises visits. The island is part of the Tavolara Marine Reserve and can be visited only through the association. Today we are 12, maximum number transportable by boat. The raft crossing is windy. The sky is cloudy and the colors of the sea are not as usual, however, once arrived at the island, the view is fantastic, with the immense island of Tavolara in front of us. Exclusively for me, they brought two mountain bikes on the island for Cristian and I to go around the island, while the others visit it on foot. We visit the structures of the old Tamponi family farm, buildings, pens for livestock, a dairy. On the side facing Tavolara we cross the remains of a small church and a monastery, named after Pope Pontian. It is said the Pope was exiled here and died of starvation. Then we enjoy the delicious lunch offered by the association and before leaving I can also briefly perform with the ukulele!

This journey is a mix of meetings and people. Here in Olbia I finally meet Selenita, a friend of a friend, with whom we communicated only via message. She is from Escalaplano, and she took care of my stay in her native country without having met me. When I arrive at her house, it’s as if we’ve known each other forever. Selenita’s home also becomes mine for four days … and artists are messy! But Selenita does not seem to care about the chaos that has been created as my things were scattered here and there around her apartment. I do some washing machines and I hang my clothes to dry. And with her I take a chance to to some shopping in this big city! 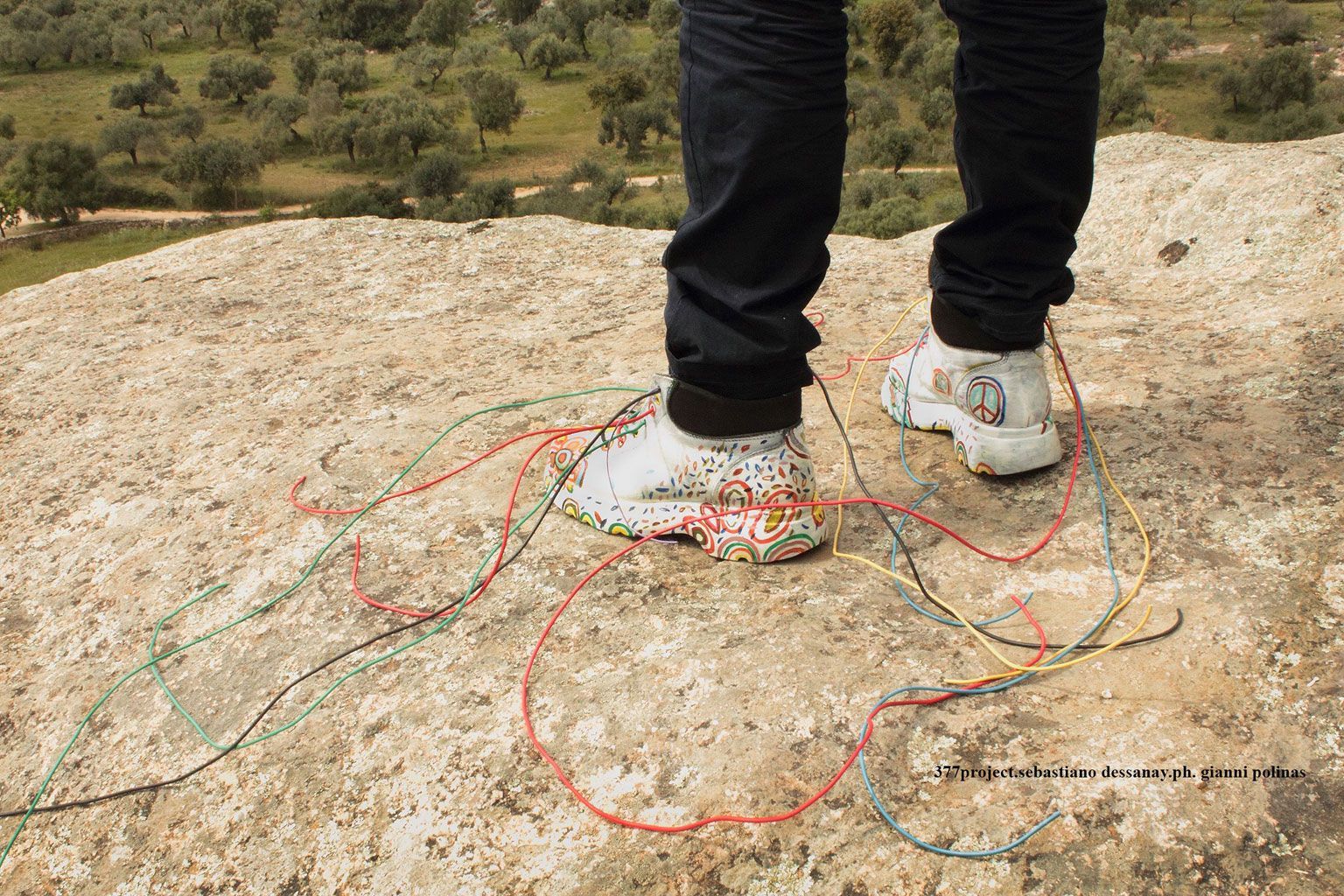 “We are invited to lunch at a friend’s house,” Selenita tells me, “you’ll see, it’s a rather special place.” We take the elevator, we arrive at the entrance. Gianni opens the door. And … WOW! An artist’s house. Beyond my expectations. The eyes turn to the right and to the left to watch not only all the works of art hanging and scattered around but above all the decoration of the environments, walls, doors, windows, all “personalized”. And then slowly we get to know each other.

Gianni Polinas is an artist. On the walls are his works, paintings, models, in three dimensions, which he illustrates to me. Then he shows the photographic catalogs of his works, to which texts are added, becoming themselves new works of art. I am struck by the series called “Invisible Routes”, a series of white boats set in black frames. Travels. Of people who have undertaken paths and created works that have make humanity progress, sometimes interrupted paths, and then taken back by someone else. With this project of mine I also feel part of an invisible route. And why not, I think of everyone’s routes. And then in this historical period I can’t help thinking about migrants’ routes, but this is a different story. I notice some boots painted with colored threads on a pedestal, a project called “Summer of Love” inspired by the “hippies”.

I spend all my days in Olbia with Selenita and Gianni. During the visit to the castle of Pedres Gianni asks me if I’m ok with him taking some pictures of myself. Sure. We put ourselves on top of a granite boulder that overlooks the valley and Gianni pulls out the shoes with colored threads. “Wear these”. I pose with the shoes. Gianni spreads the threads on the granite. They are like roots. My roots. Which connect me to the Sardinian rock. And Gianni immortalises the moment. 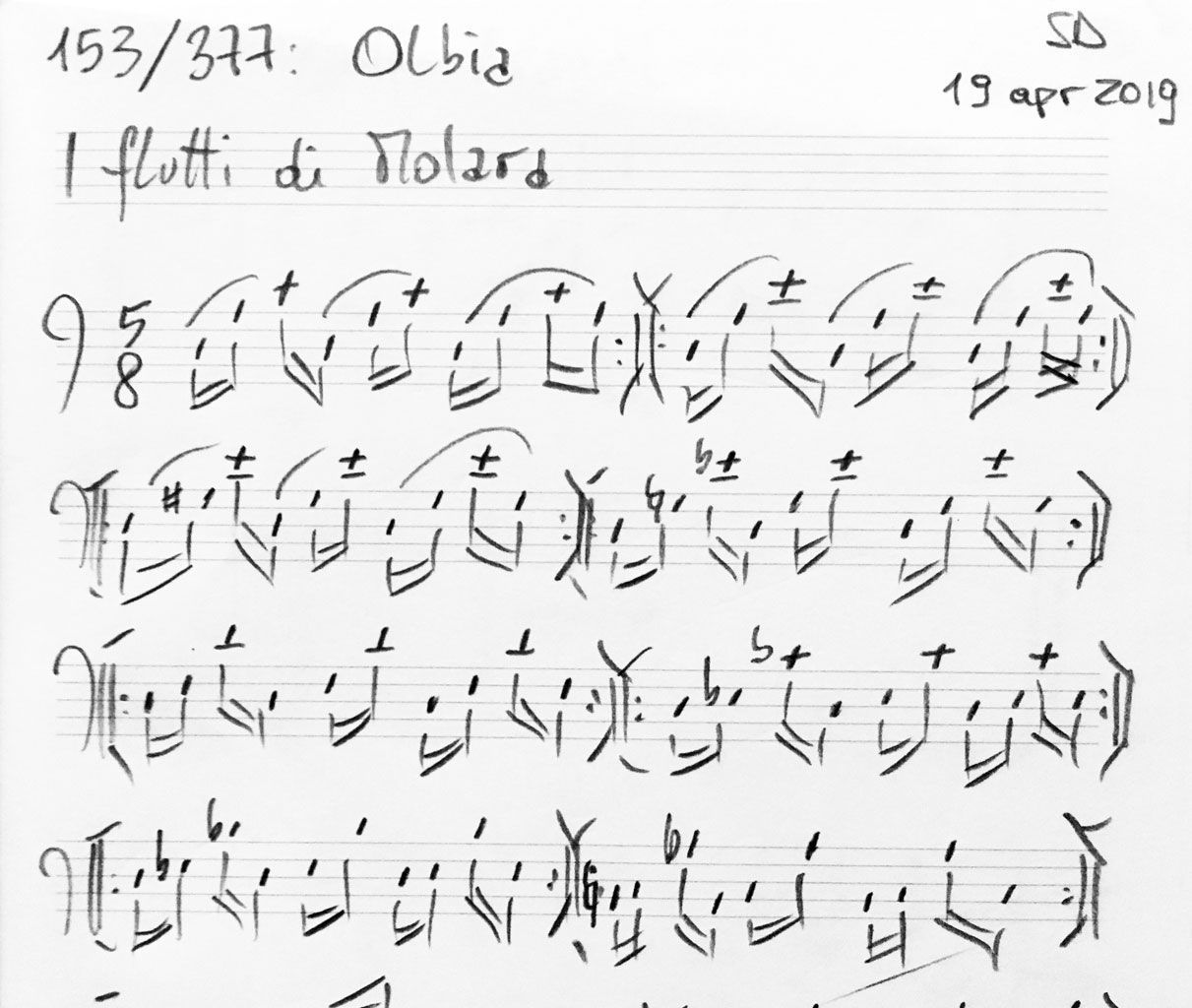 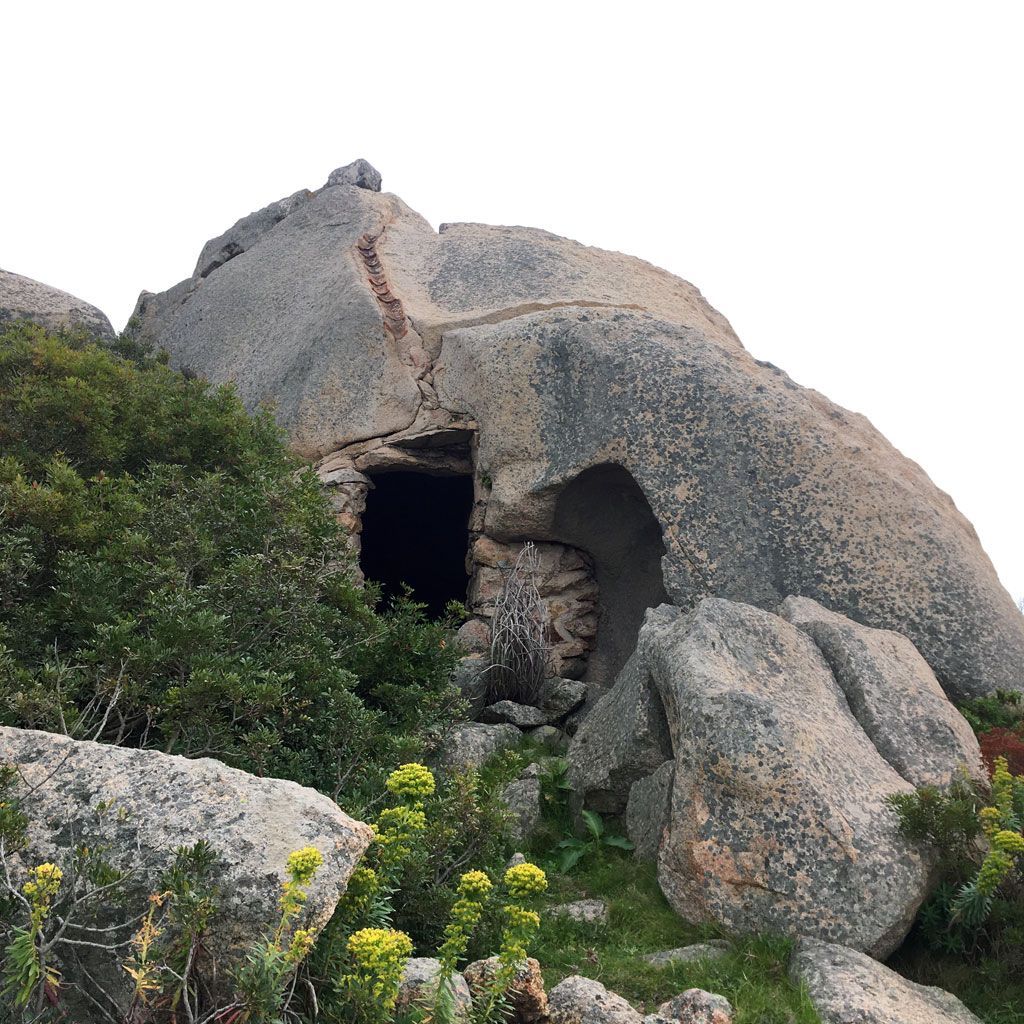 Cristian from the Molara association takes me to see a large tafone on a granite rock at the end of the island. It is called the Bandit Cave because it seems that an outlaw found refuge here in the 1800s. The cavity is closed by walls built by man, as often happens, to obtain enclosed spaces, generally to keep animals, and here once lived a shepherd. Cristian tells me the story of the lovers of the island of Molara. A couple who ran away from home to take refuge here from families who did not approve of their union. When the girl’s father landed on the island armed with a rifle to retrieve her daughter, the shepherd of the cave had to intercede to prevent a tragedy from happening. The couple returned to the mainland and eventually married. This story is not a legend but is told by the same couple, now elderly.