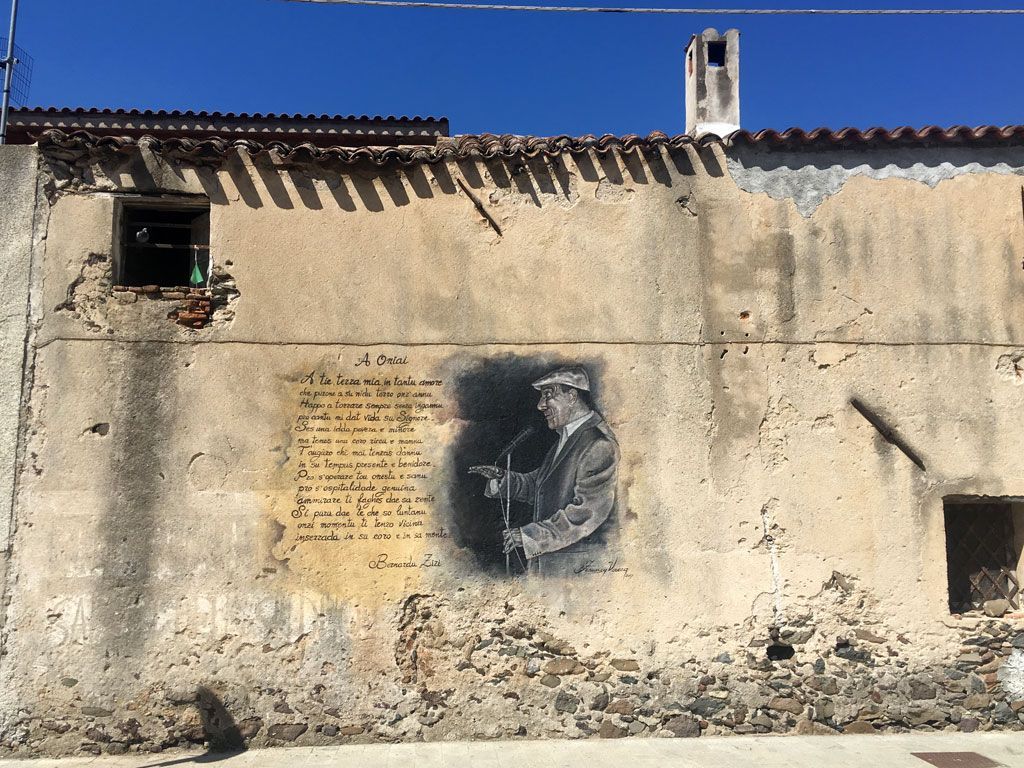 Today, a short trip in the company of Piera who escorts me from Irgoli to the home of her friends Giuseppe and Marisa who will host me here today. A kilometer and a half to the house in the countryside just before the entrance of the village.

Having made their acquaintance and had a coffee, I get back on my bike to take a tour of the village. I pass the church of Sant’Antonio at the entrance and I go into the historic center, very well looked after. I pass two other churches right in the center, and I wander among the houses, many built in basaltic stone. In fact, Onifai is set between two basaltic hills that crown it. 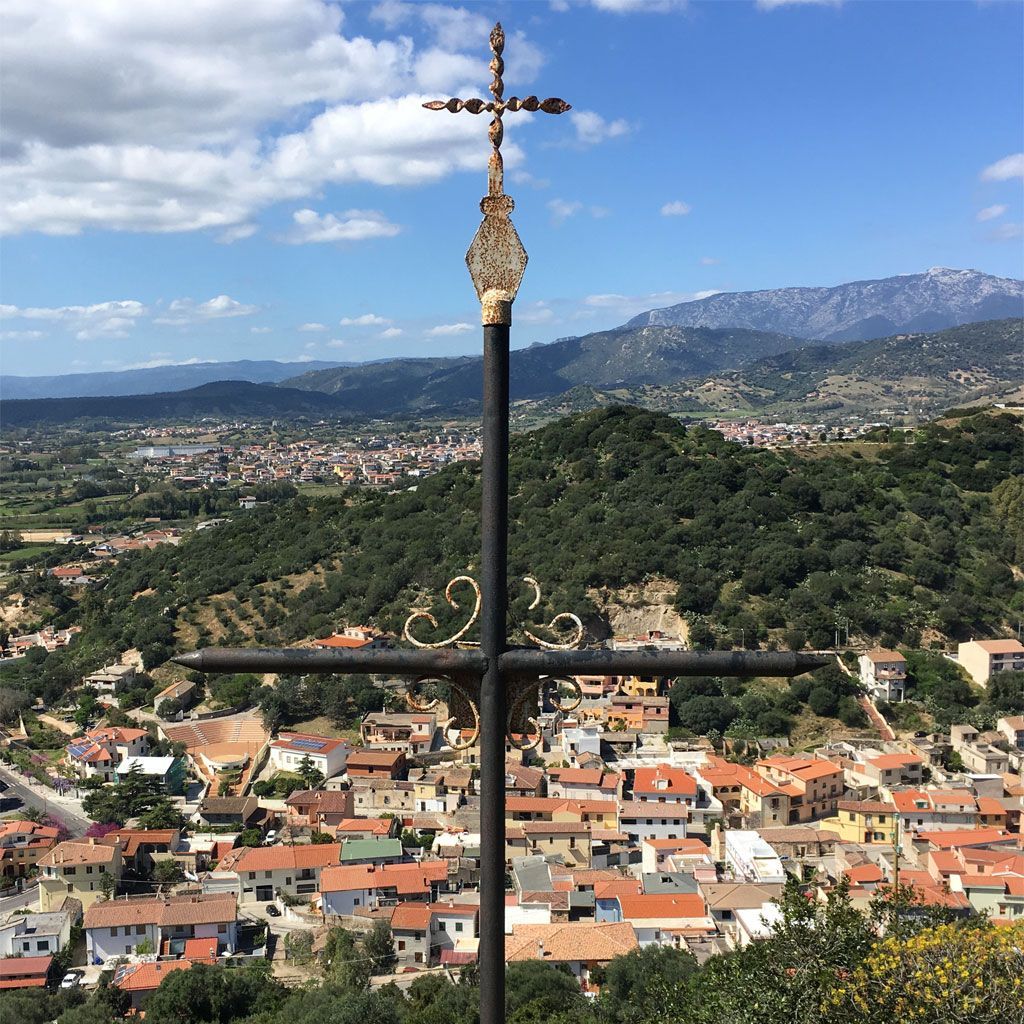 I decide to climb the steep hill to reach one of these mini basaltic plateaus. From here I once again admire the Cedrino valley and Mount Tuttavista. I go back down towards the village and pass on the other basaltic relief, and this time I can also see the villages I visited in the past few days, Galtellì, Loculi and Irgoli, all close by. 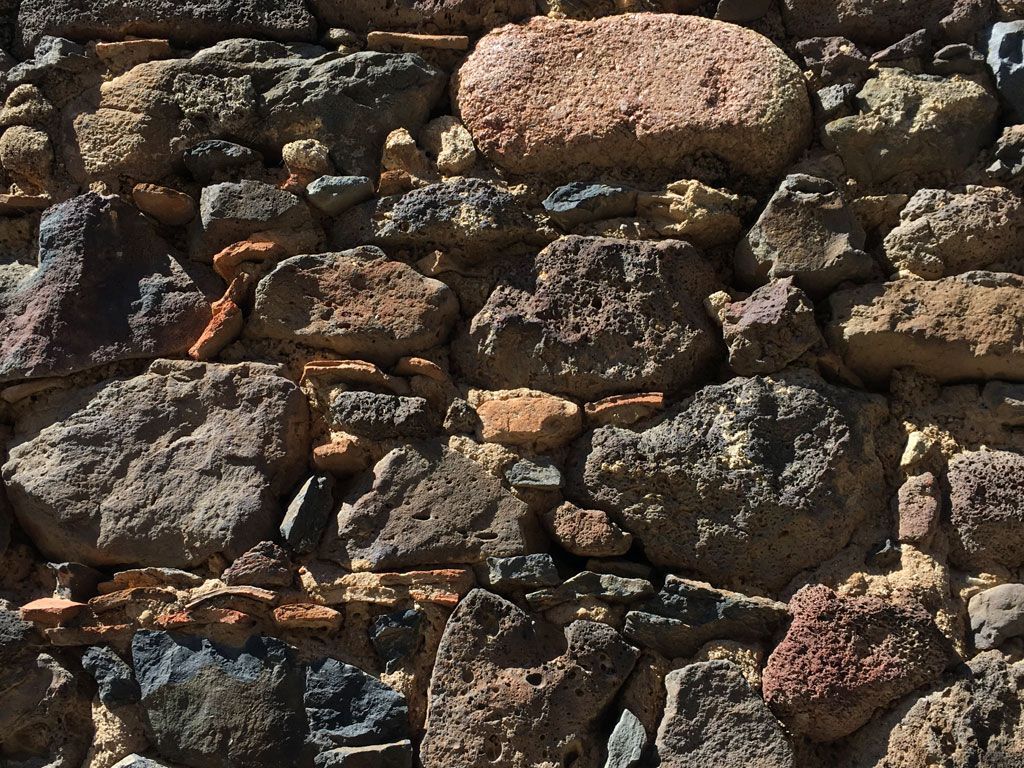 I return to Giuseppe’s house where a nice lunch is waiting for me, and a nap … a real luxury on this trip! Then in the afternoon, Giuseppe and I get in the car to visit some places in the surrounding area. We climb the mountain behind the village and park the car. We enter the tight and dense vegetation and across rocks we reach the Osana nuraghe and, not far away, the sacred well Linnarta. Although these remains are very hidden and covered with vegetation, their size and importance are evident. Back to the car, we drive to a plateau where the tomb of the giants Cutinas is, of which only the base remains. 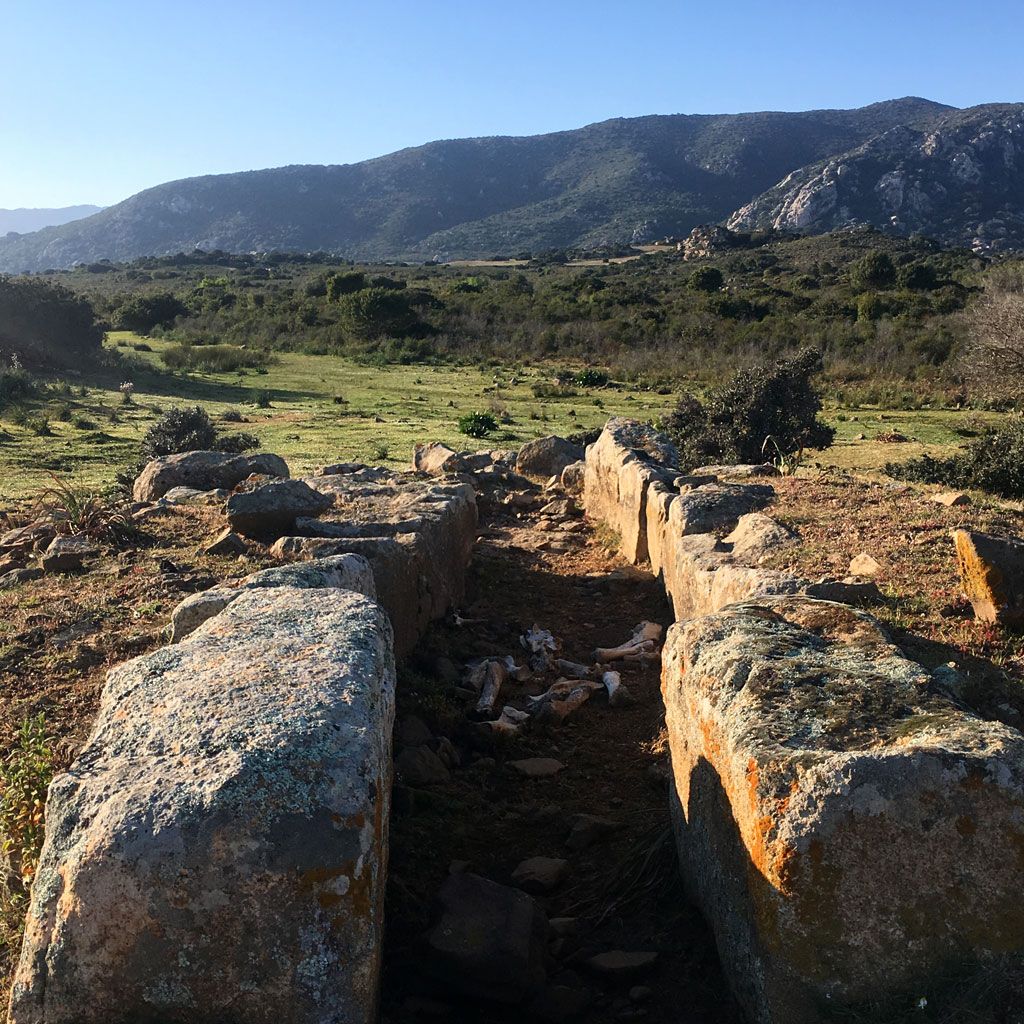 We then stop in an entirely granitic area, not far from where I was yesterday with Nino, where Giuseppe’s cousins ​​have a plot of land and raise pigs. We drive in the middle of a beautiful territory and slowly we approach the mountain. When we arrive I am enthralled by the place, nestled among granite rocks, real sculptures, with the most incredible shapes. While Giuseppe is talking to his cousins, he tells me to go for a walk around. I walk among the pigs and climb further, finding even more incredible granite rocks, and admiring a crazy landscape. 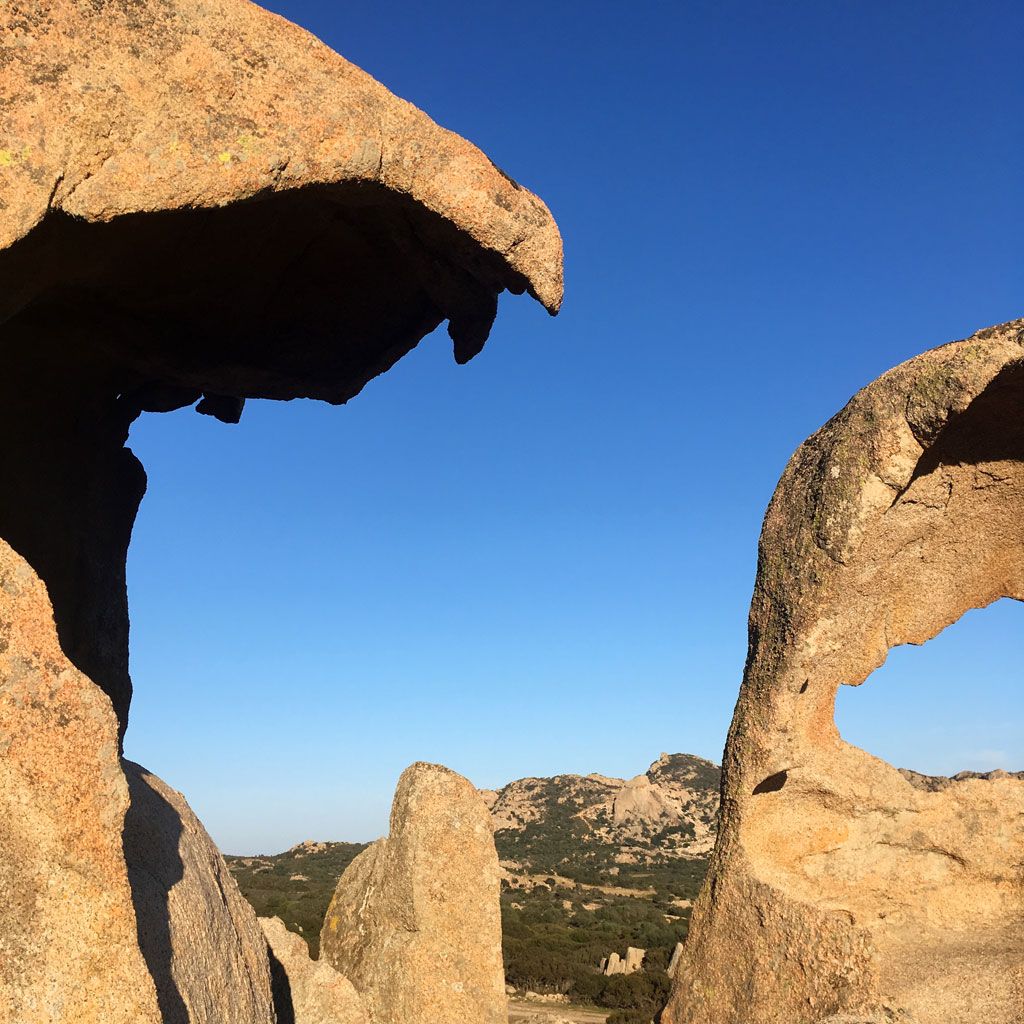 On the way back we reach to a spring where we drink fresh water but soon after the car belt breaks and we get stuck. Fortunately, the phones have signal here and Giuseppe manages to call Nino, who shortly after, in the company of the dog Pulichitta, comes to tow us home. Here, Piera also joins us for a succulent dinner. Good night. 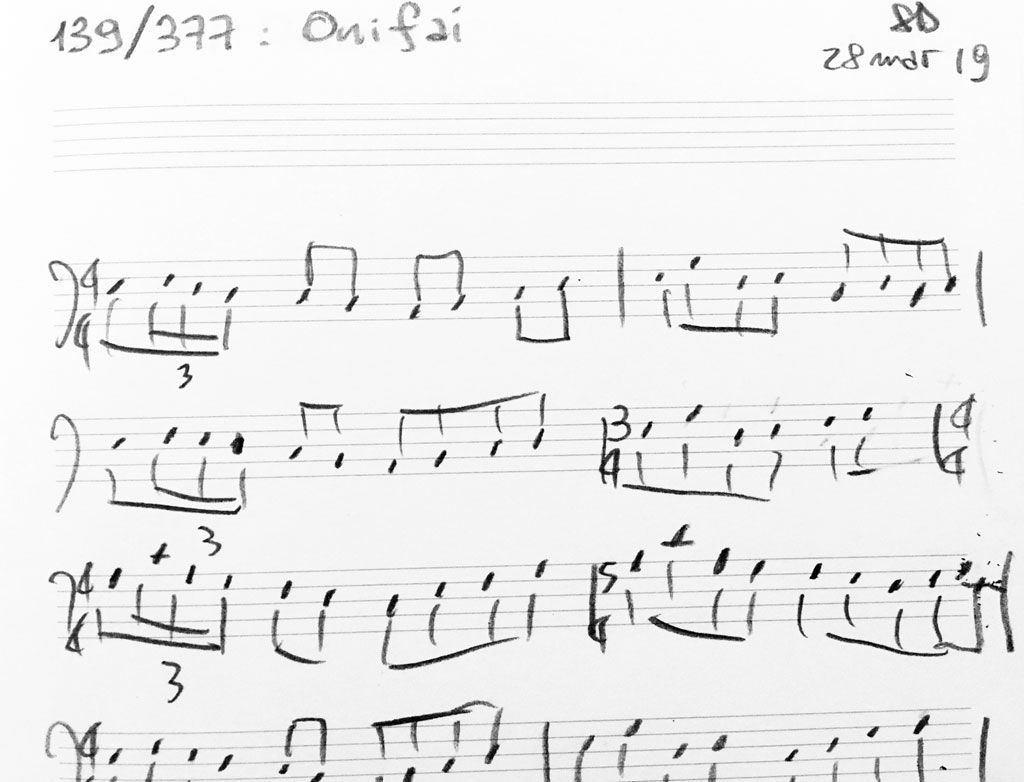 Giuseppe tells me that his father had a sheepfold in the mountains and that he walked an hour and a half every day to go to the other side of the valley where what would later become his wife lived. Even Giuseppe lived here, he slept in a little bed of branches. There were no roads but only paths and one walked for hours and hours. This is also why Giuseppe knows this territory like his pockets. He knows it with his eyes closed. Literally. Giuseppe in fact suffers from an illness that has compromised his sight, and the whole day today was spent literally “blindly”. I drove his car to the Onifai countryside. But his knowledge of the territory was evident when we went in search of the nuraghe.

Giuseppe walked with a stick and I stood before him, being able to see the shadows anyway. But he cannot see the details of what’s around him. So, among thick vegetation and rocks, Giuseppe gave me directions “now do you see a wall of rocks? No? Then we continue further to the right. Now? Ok, jump the wall and then continue up to that olive tree” and so on, between a ” ake the left after those stone steps” and “turn right after the cysts.” And so, blindly, we managed to find the nuraghe!