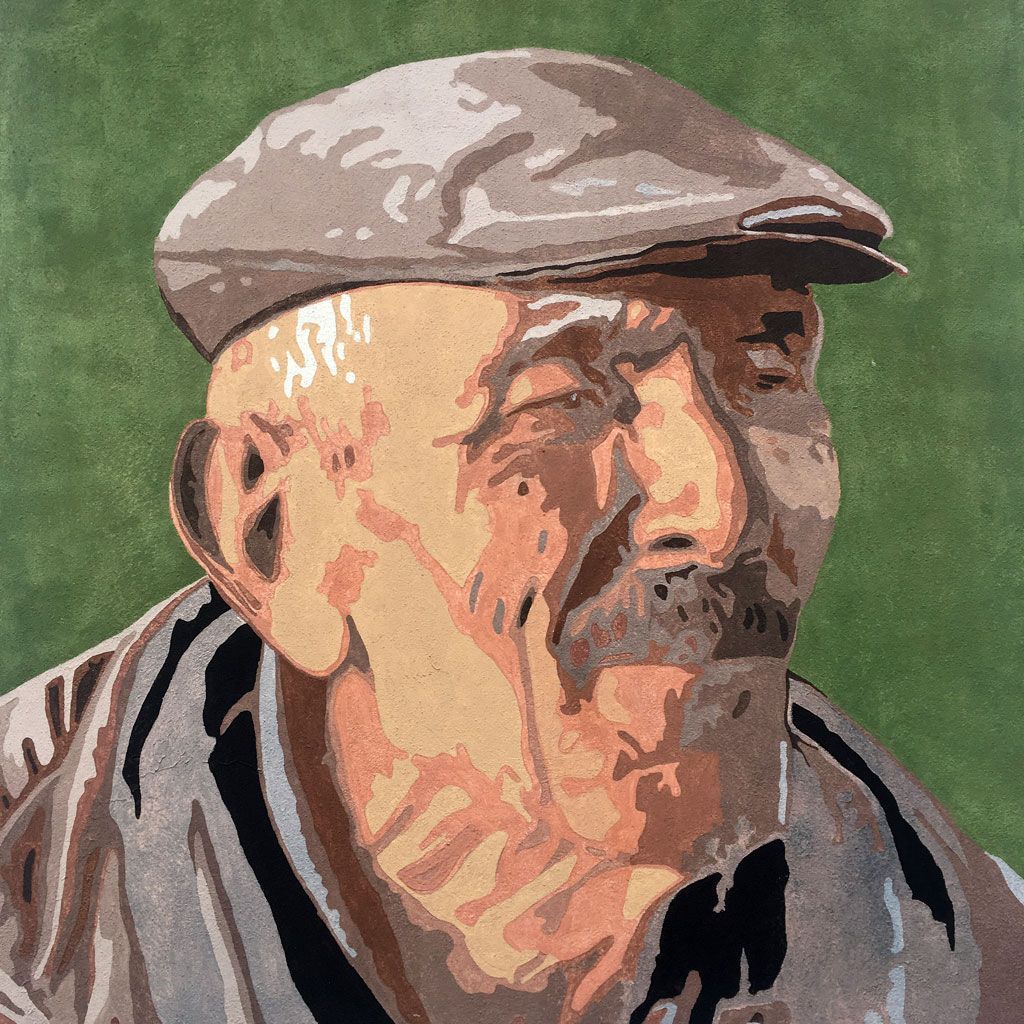 Luckily, today the weather has improved and it has stopped raining only a little while ago. I leave Galtellì and shortly after I go back to Loculi, where I feel I have to return to take a ride in the historic center with the GoPro turned on. Returning to the main road, I cycle for only one kilometer and arrive at Irgoli.

I call my contact, Piera, who was passed by Stefano who hosted me in Lotzorai. She gives me directions to reach her house, passing along a large factory, which produces the famous Irgoli sausages, founded by her uncle. When I arrive, I am warmly welcomed by Piera and the little dog Pulichitta. After a coffee, I go for a walk in the historic center of the village. 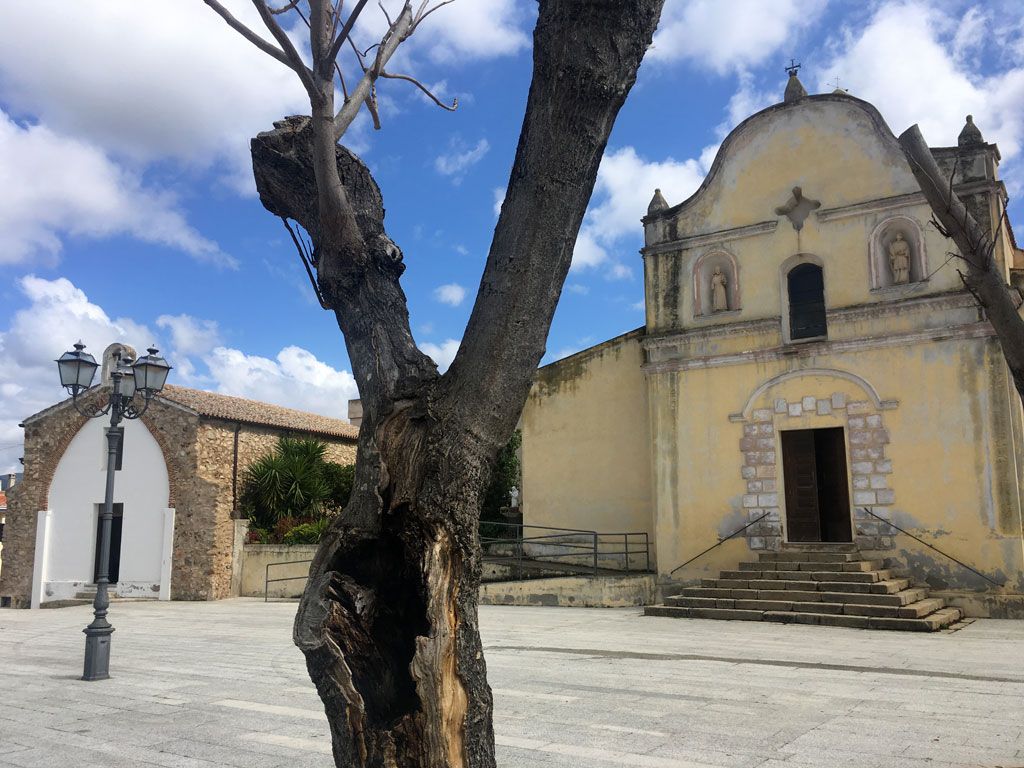 Here too, as in so many countries that I have visited, there are many murals. The themes are always the same, the elderly of the country, scenes of rural life, or domestic life of other times. I get to the roundabout overlooking the Town Hall, and I enter the inner streets, full of ancient houses, some well restored. I pass the small church of Santa Brigida and get on a wider road, on which there are several old buildings, probably noble, well restored. I return to the main square and a little way up I go up the steps to reach the square where two churches overlook, the largest and most recent of San Nicola, and the small church of Santa Croce. There is a funeral in progress, and many people on the square, so I decide not to go inside and see the interiors. 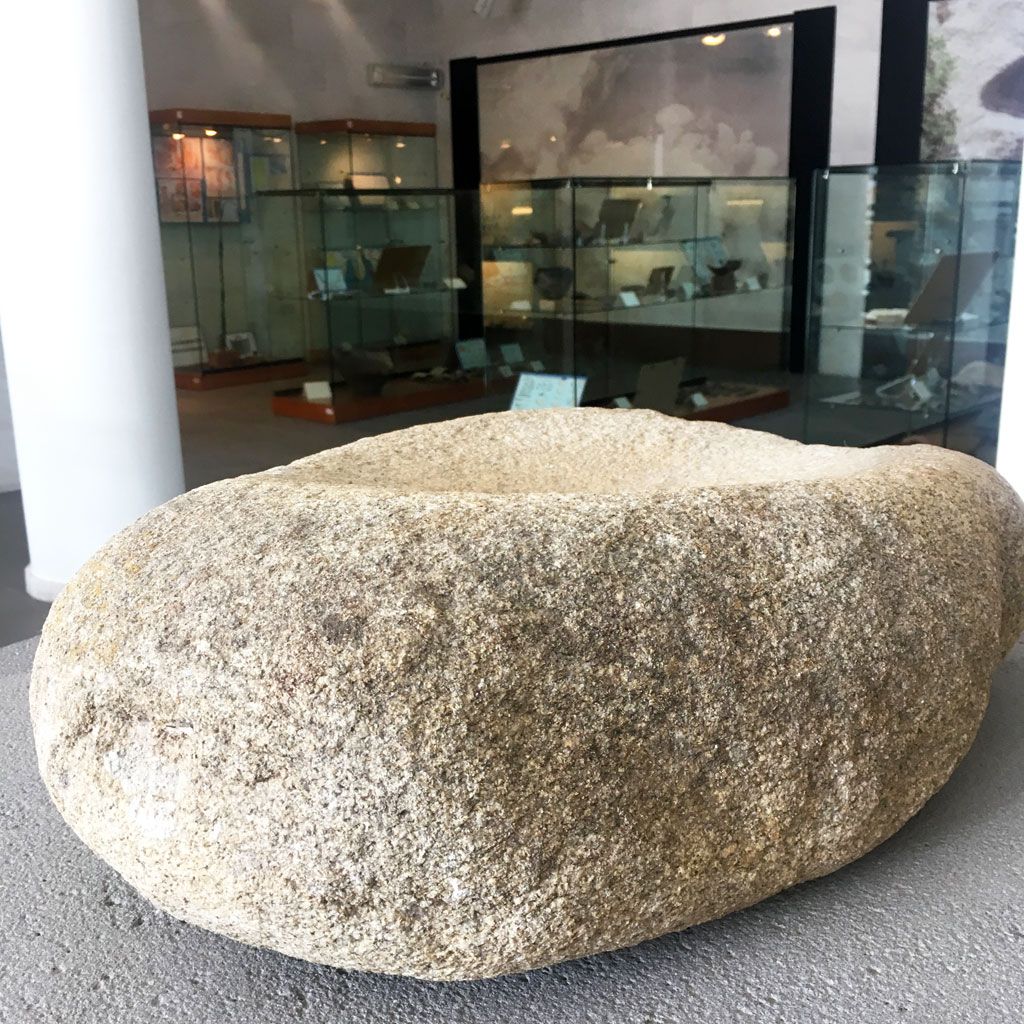 Walking further, I arrive at the Antiquarium archaeological museum. Here is a beautiful and rich display of finds from all eras, mainly from archaeological sites in the Irgoli area, in particular from Janna ‘e Pruna, a nuragic site that I will visit in the afternoon. A nice chronological panel helps me to mentally review the chronology of Sardinian history, which I have now acquired in these months of wandering, the Paleolithic, Mesolithic, Neolithic and Eneolithic, the Bronze Age (which includes the Nuragic civilization) and then the Iron Age, the Punic, Roman, Byzantine and Judicial civilizations. For almost every one of these, there are finds here.

I go back for lunch, where Piera’s husband Nino has arrived. He is president of the Campos association, which is in charge of preserving some traditional forms of Sardinian music. Also their son Giuseppe, breeder and expert improvising poet, together with his family arrive. We eat a very good pasta sauce, with meat from Giuseppe’s pigs. In the afternoon, Nino and I take the car to visit the area, in the company of Pulichitta. We go up to Mount Bottesu, and we reach the top, which overlooks on one side the Cedrino valley, with the imposing Mount Tuttavista, symbol of these days, and on the other side we see the valley that flows into Siniscola, with Monte Albo running parallel. From here we reach the archaeological site of Janna ‘e Pruna. A good guide shows us and describes the three main elements of interest, a nuragic temple, a large hut, and the sacred well, all at a little distance from each other, set in a beautiful valley of granites. Unfortunately in the Eighties, some organized tomb diggers came with an excavator and devastated the site to plunder it from all the objects probably still buried. What remains today is still remarkable. 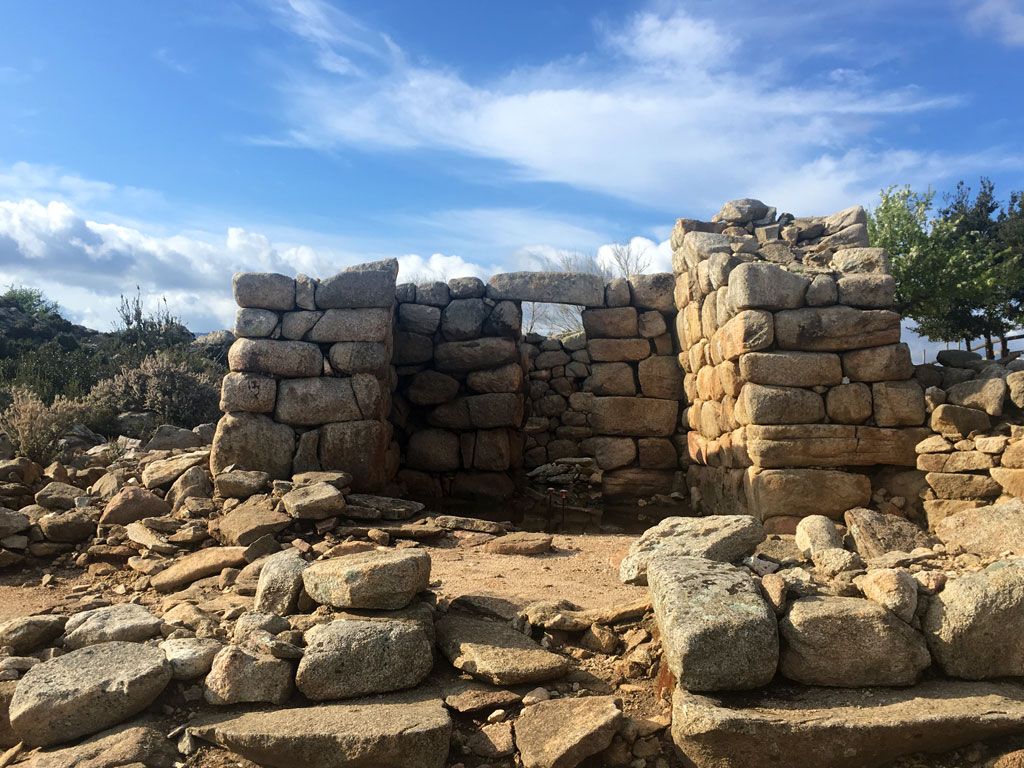 On the way back to the village we pass the small church of Sant’Elene, rebuilt in modern times next to the ruins of the old church of the same name, of which only a wall with some arches remains. We get home where I can work calmly, before a dinner all together again, this time with meat and cheeses melted by the fireplace and spread on ‘carasatu’ (as they say here instead of ‘carasau’) bread with a little chestnut honey. 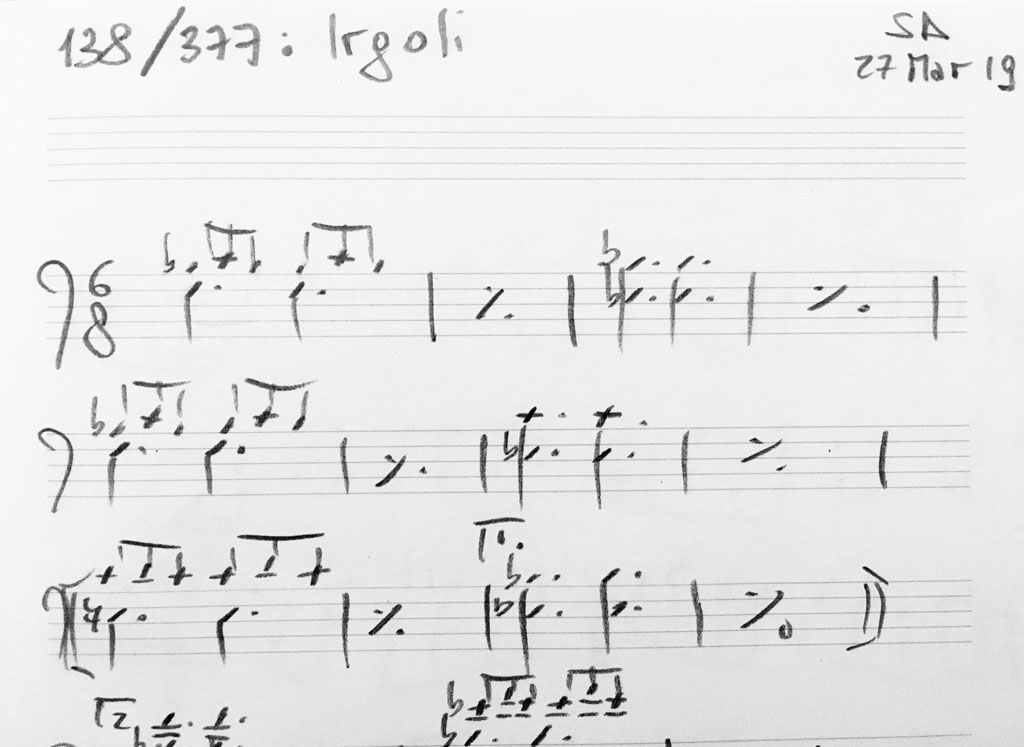 Piera tells me that her father Salvatore, now deceased, often had dreams with a mystical-religious background, and that in these dreams a character appeared who often announced various things to do and precise actions to perform. One of these apparitions in dreams was the Madonna, who asked him to build a new church in Sant’Elene. For many years Salvatore worked to raise funds until he was able to scrape together the entire sum and satisfy the divine dream demand.

Sometimes Sardinian is more similar to English than Italian. Let us take the verb ‘take’ which in English in addition to ‘to take’ can in some cases be ‘to pick’ (grasp). In this area ‘taken’ it is said ‘picatu’, the ‘pigadu’ or ‘pigau’ from Campidano with the hardest consonants, which is much more similar to the English ‘picked’ than to the Italian ‘preso’. If we then take the ‘pi-a-u’ of certain villages of the Nuoro area (Ollolai for example) there is here, as in English, the glottal stroke (glottal stop). Sardinian similar to English? Sometimes yes.