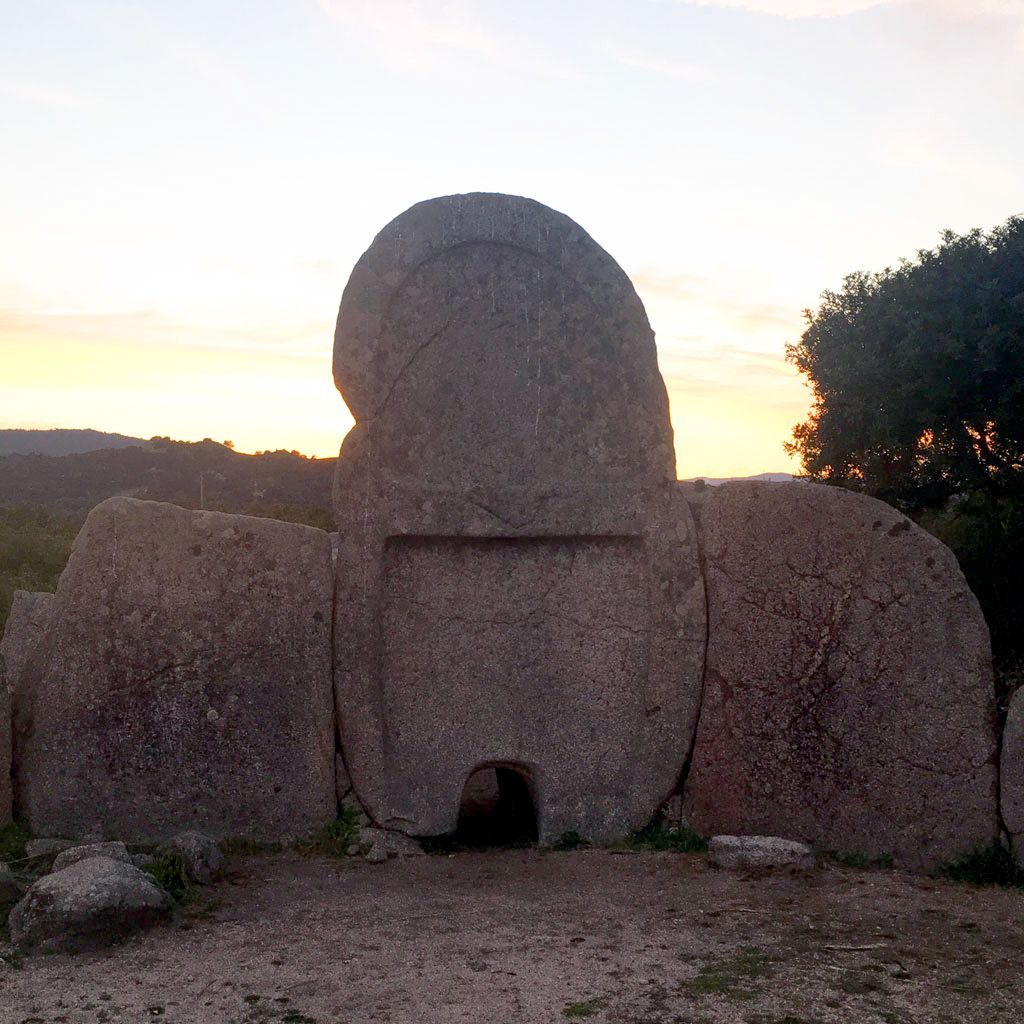 Today’s journey, despite being hard at times, is spectacular. I cycle up the tough climb I did yesterday, which from Urzulei will take me back to the 125 road. I enjoy for the last time (on this trip) the view of the Ogliastra valleys and the calcareous mountain overlooking the village. I enter the 125 ‘Orientale Sarda’ road and continue to climb, with the limestones on the left and the rugged territory of Baunei and its codulas on the right. I’m entering the Supramonte region.

It is a beautiful day, and I slowly arrive at the Genna Silana pass, 1017 meters above sea level. The road sign is literally carpeted with stickers, cyclists, motorcyclists, hikers, this is one of the Sardinian territories most beaten by walkers, nature and travel lovers. And I understand why: the view that is offered to me immediately after the pass is breathtaking, the valley between the limestones, and the outlet of one of the most emblematic and important places of this territory, the Gorropu gorge, which marks the borders between the municipalities of Orgosolo and Urzulei. I stop shortly after admiring this mighty, immense and mystical landscape. 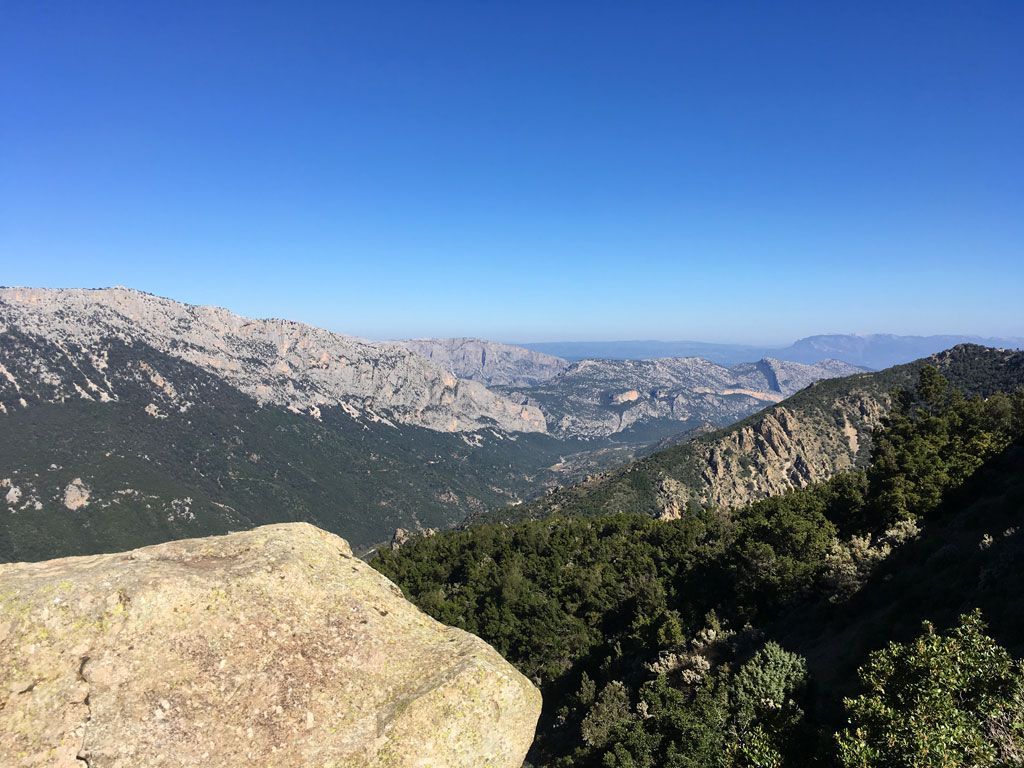 From here on it is all downhill and I swoop towards Dorgali, fast, in the shade of limestones, so fast that I am almost an hour ahead of arrival. My contact here, Antonella, is watching the live broadcast on FB, and she comes to meet me with her car. Antonella has followed me and helped me since the very beginning of the project, she’s one of the important characters of this adventure. I follow her into the tunnel that comes out above Cala Gonone, and finally we meet again after that first meeting (which seems so far away) in stage number 2, Oliena, not far from here.

I decide not to go down the steep descent that goes down to Cala Gonone, it would be too long to climb back with the heavy luggage, and instead we head to the center of Dorgali, where a small welcoming committee has formed, the councilor for culture Rosanna, the boys of the association Speedy Sport and Antonio, who nobody knows with this name but with that of ‘Zietto’, who will host me in his b & b. Zietto greets us in his cellar, literally teeming with bicycles, and food, cakes, and above all his wine, “Il Cannonau di Zietto”, which begins to fill glasses dangerously.

After this wonderful welcome, together with the boys of Speedy Sport, a sports association for disabled children, we enter the beautiful courtyard of a historic building in the center, and here I tell my adventure, playing the ukulele and as always answering many curious questions that people ask. 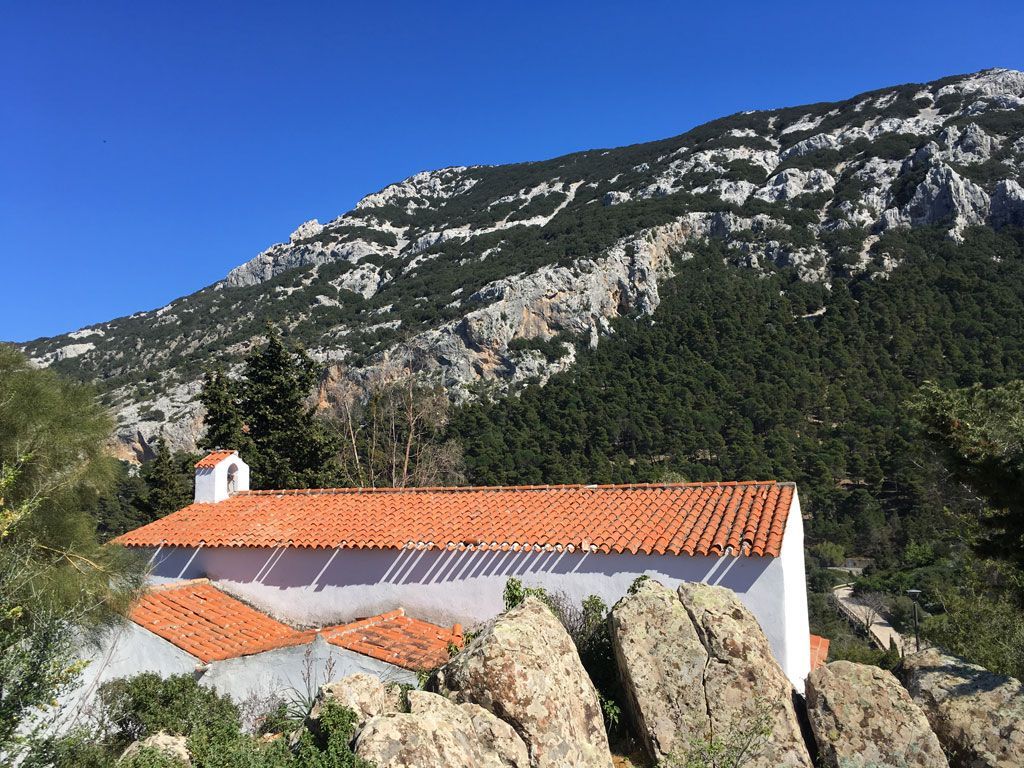 Before lunch, Zietto takes Antonella and myself in the car for the ’10 churches trip’ … for a moment I fear it is the tour of the 10 tzilleri (wine bars) but I reassure myself when I understand that here in the center of Dorgali there are really 10 churches, and Zietto passes them all, entering the narrow streets of the Spanish quarter, so narrow that I fear for his car, and of each church he describes the particularities and some anecdotes. We conclude with the beautiful church of Carmelo, on a hill in the outskirts of the village, from where we can admire a beautiful panorama, over the town, the Supramonte behind, and over the wide valley in front of us. 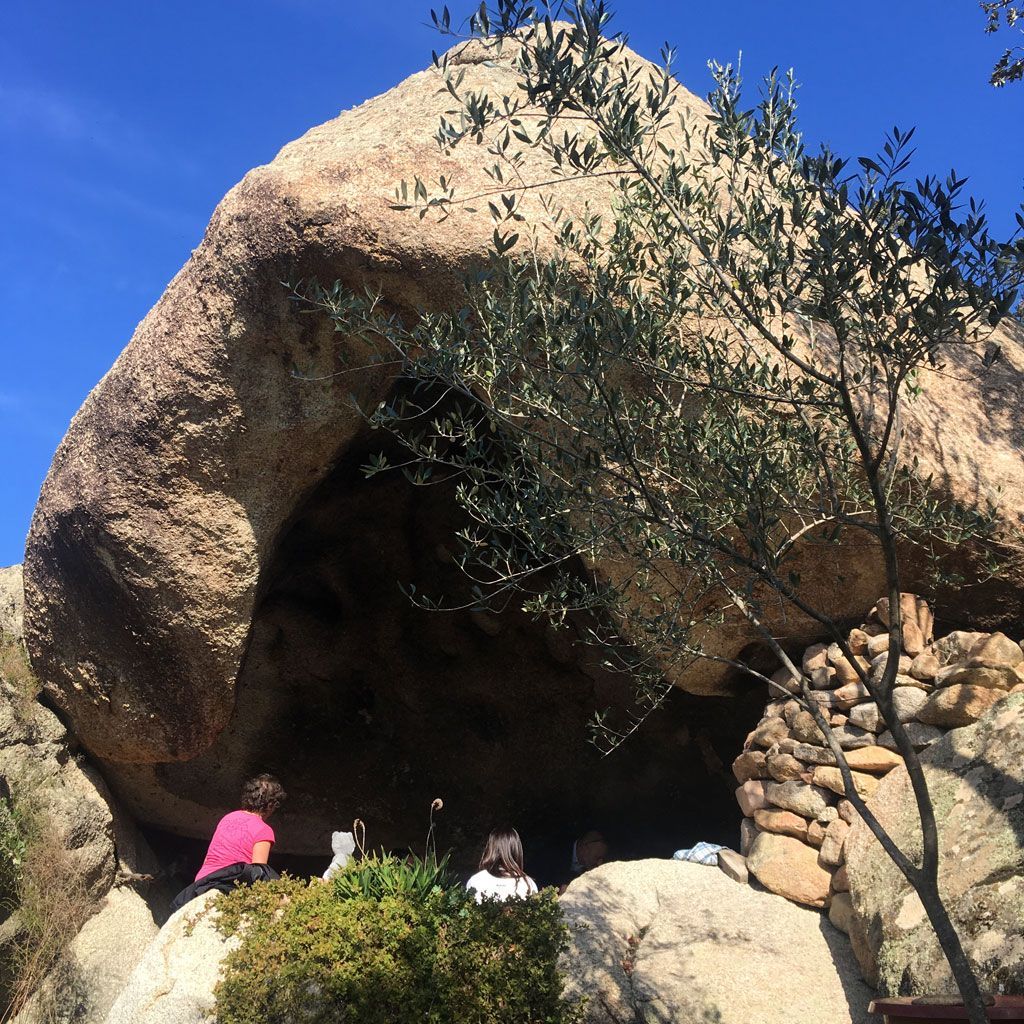 Only two hours have passed since my arrival and I feel like I’ve been here for days! It’s time for lunch, we load the car with various packs and head to the countryside, right in the valley below the village, in the Sos Concales area. A ‘snack’ awaits us, as it is called in these parts, but in reality a royal lunch, in one of the most characteristic locations I could expect: we are inside a granite, a ‘tafone’, in geomorphological terms one of those cavities created by the erosion, so large that inside there are benches, laden tables and various shelves with bottles, coffee makers and more.

We eat cured meat, cheese, and the inevitable roast suckling pig, accompanied by red wine. I’m sitting next to Ziu Portolu, a gentleman of an age I can’t define, he could be 70 or 90 … and maybe more, I don’t dare asking for politeness, but I listen to his stories about how, with a group of elderly, they recovered some ‘cuili’, the old shepherds’ dwellings, in the territory. And in one of these restored places Zietto accompanies me, and takes two small wooden glasses, where he pours some wine directly from a barrel hidden in a corner. 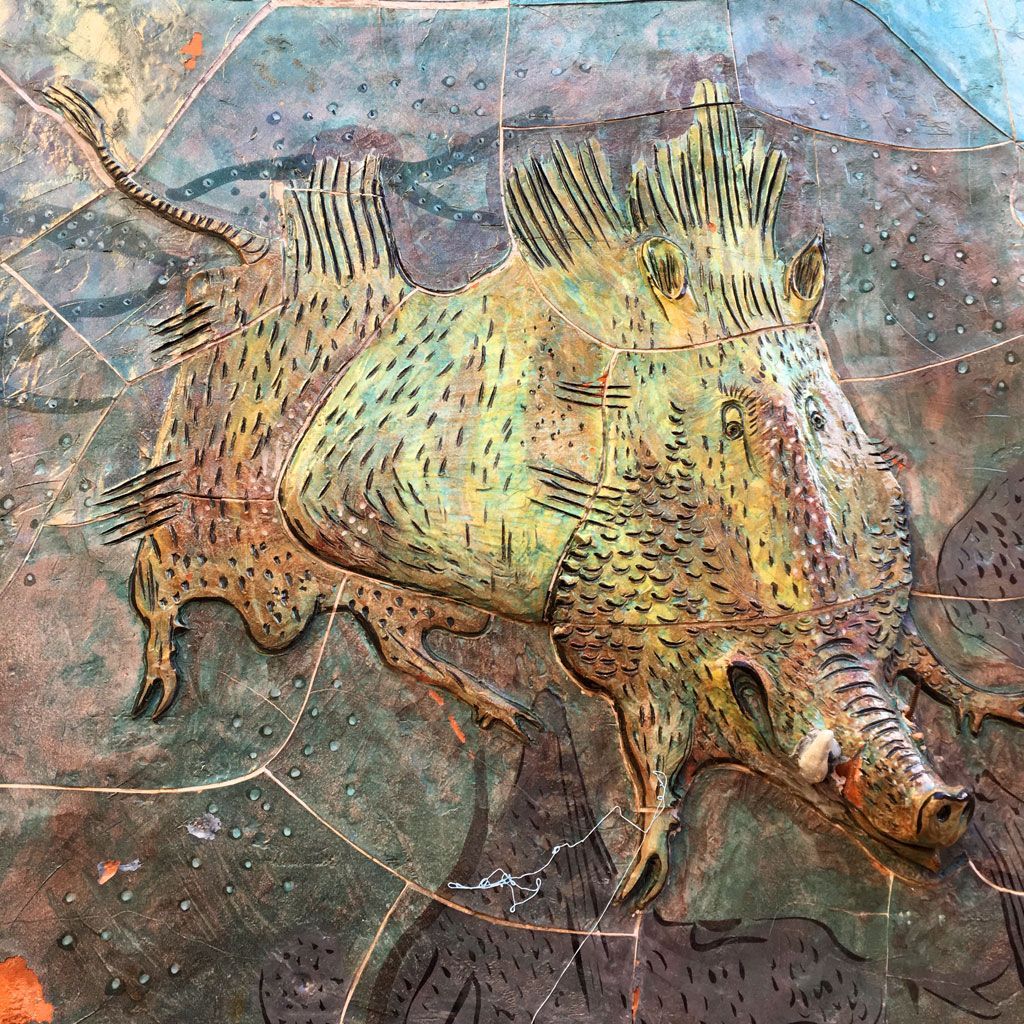 Antonella and I manage to leave the cheerful crowd soon, for a visit with Councilor Rosanna to the Town Hall, which houses the works of the famous painter Salvatore Fancello. I admire the works of this artist who died at the age of 25. Not far from here we stop at Piazza Funtana, where the fountain is surrounded by beautiful ceramics by Gianluigi Mele, inspired by the works of Fancello. 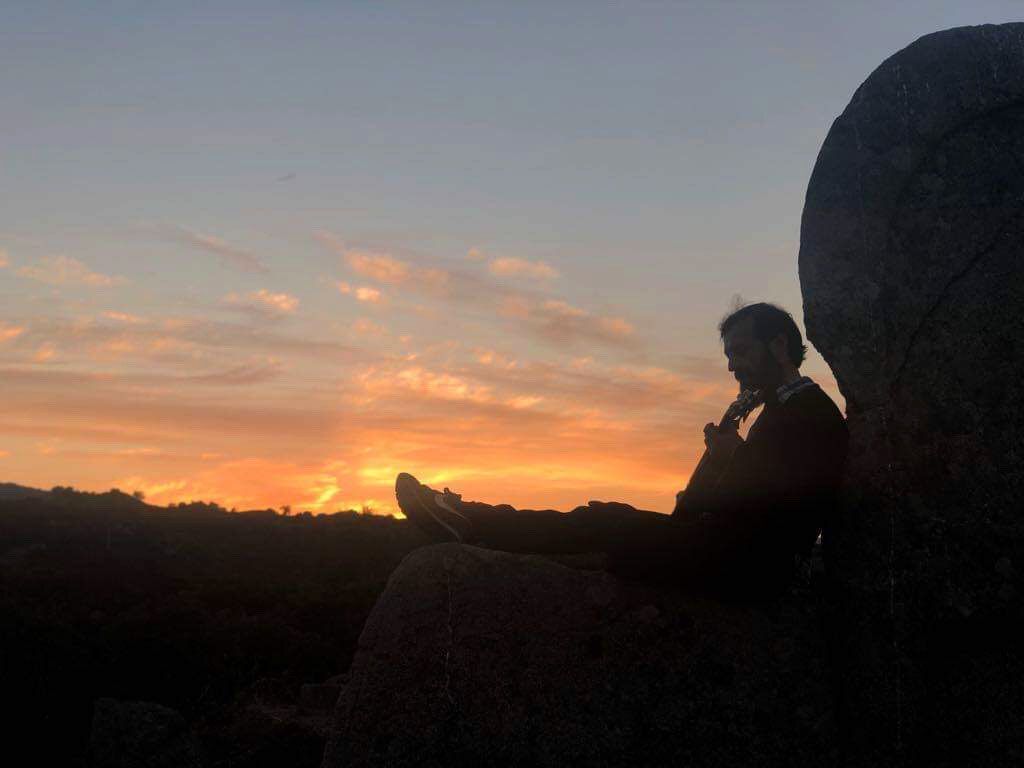 At this point of the day I feel like I’ve been in Dorgali for a week! But we’re not done yet. Antonella and I take the car to head to one of the most important archaeological sites in the area (here they say of Sardinia!): the tomb of the giants Sa Ena ‘e Thomes, beautiful and well preserved, with the stones of the entire exedra in excellent state. Antonella has chosen a perfect time (not by chance): it’s sunset, and the scenery around the tomb is spectacular. Here we are joined by the family that hosted me in Oliena, Graziella, Lussorio and Enrico. I am delighted to see them again, and I improvise a small piece, sitting on the stones of the tomb.

We return to the village in the dark, and for the last stop, at the Il Giardino restaurant where we will all dine together, Giampaolo Selloni joins me, the pianist who accompanied me in the concert of my stage 1 in Nuoro, Lollove, here as director of the Coro Prama ‘e Seda, with whom they pay homage with songs written by Giampaolo on texts of my great-grandfather Pasquale Dessanay. I can join them to play Nanneddu Meu, and the evening ends with a beautiful atmosphere. And at the end of the day, when I collapse in the room of Zietto’s b&b, it seems to me to have always belonged to this place. 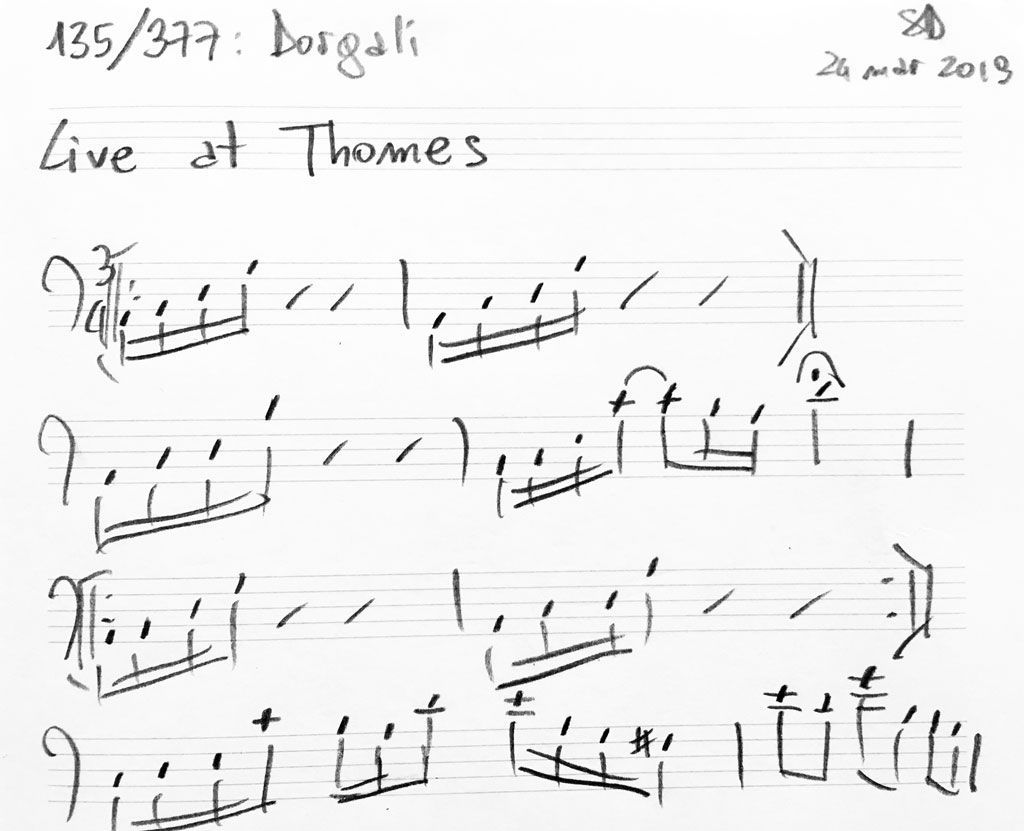 To the essential bibliography for my project belonged Ichnusa, a book by the writer and cyclotourist from Gorizia Emilio Rigatti, which I read last year. The book describes the trip to Sardinia of a month or so, and the therapeutic power of this island and its people.

When I meet Zietto, all of a sudden I remember the chapter of Ichnusa dedicated to Dorgali, and the description of his character. “For a boy ‘perfetto’ lodge at Zietto!” Antonio tells me in welcoming me to his b&b. And during the day he fills me with anecdotes. On the three most important Fancellos of Dorgali, the artist Salvatore called S’Anghelu, the angel; Bachisio called ‘pentolino’, small pot, the one who would have invented sound cinema but naively sold the patent to the Lumière brothers, and on Pascale called ‘crodazzu’, a great anarchist of the country.

Then he tells me about his passion for motorbikes, about the models he owned, and, showing me the scars, about the bad accident he had to help another motorcyclist in difficulty. He proudly talks to me about the Motoclub Dorgali he created, and which organises international motorbike events. And he also tells me about the enduro champion Claudio Spanu, also from Dorgali.

The next day, when Zietto takes one of those ancient bicycles with the giant front wheel to accompany the first few hundred meters of my departure, while I laugh out loud, I decide that another Fancello must be added to Dorgali’s three Fancello’s, Zietto, Fancello too … and their little sister, Antonella, without whom this day would have had a much shorter report … or because of whom this report approaches the dimensions of a novel!