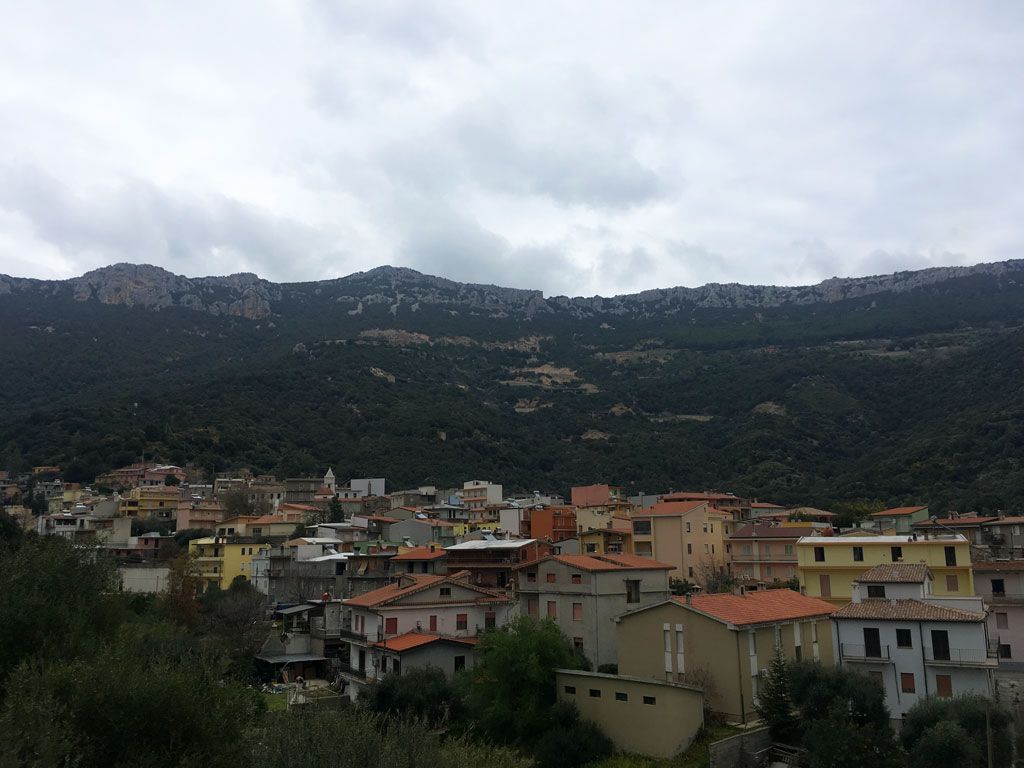 Today’s route is a steep descent, a short cut in the dirt that connects Baunei directly to Triei without having to go back onto the 125. It is a really winding and dangerous road to do with my tires but it saves me time, and the view is fantastic.

I arrive at the Town Hall where a big group welcomes me: the Mayor Anna Assunta, Anna and Giuseppe (from his accent I guess he’s from Cagliari), Simona from the bnb Su Neulagi who will host me tonight, Rosanna, the mother of Manuela Mameli, a very good friend of mine jazz singer, who set up the Cultural Connections Association here in Triei. 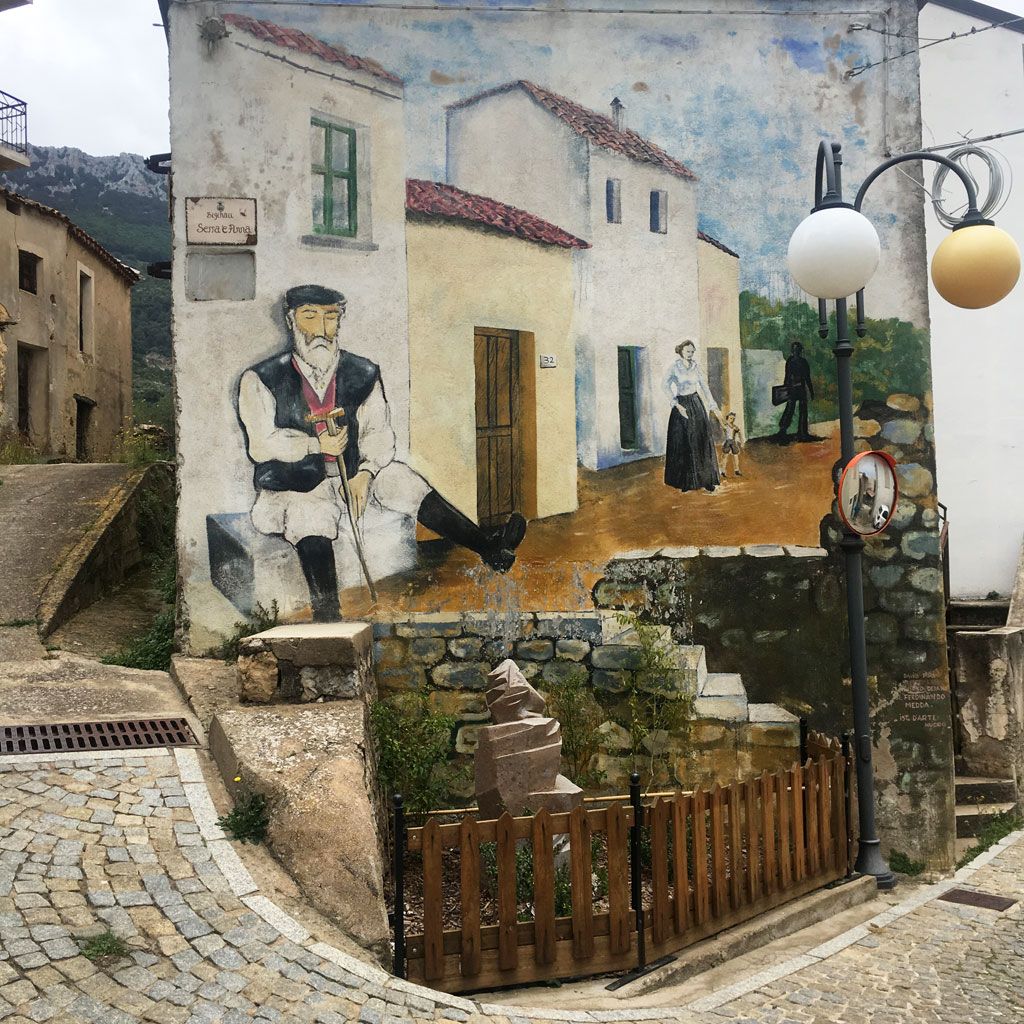 While we have a good coffee in a bar in the center they tell me that the chef of the Quirinale who cooks for the Presidents of the Italian Republic, from Cossiga onwards, is from Triei, and that even here, as in Tonara, there is an important production of local nougat. Soon after we head to elementary schools where I tell my story to children, an appointment that is always appreciated by me and my audience. 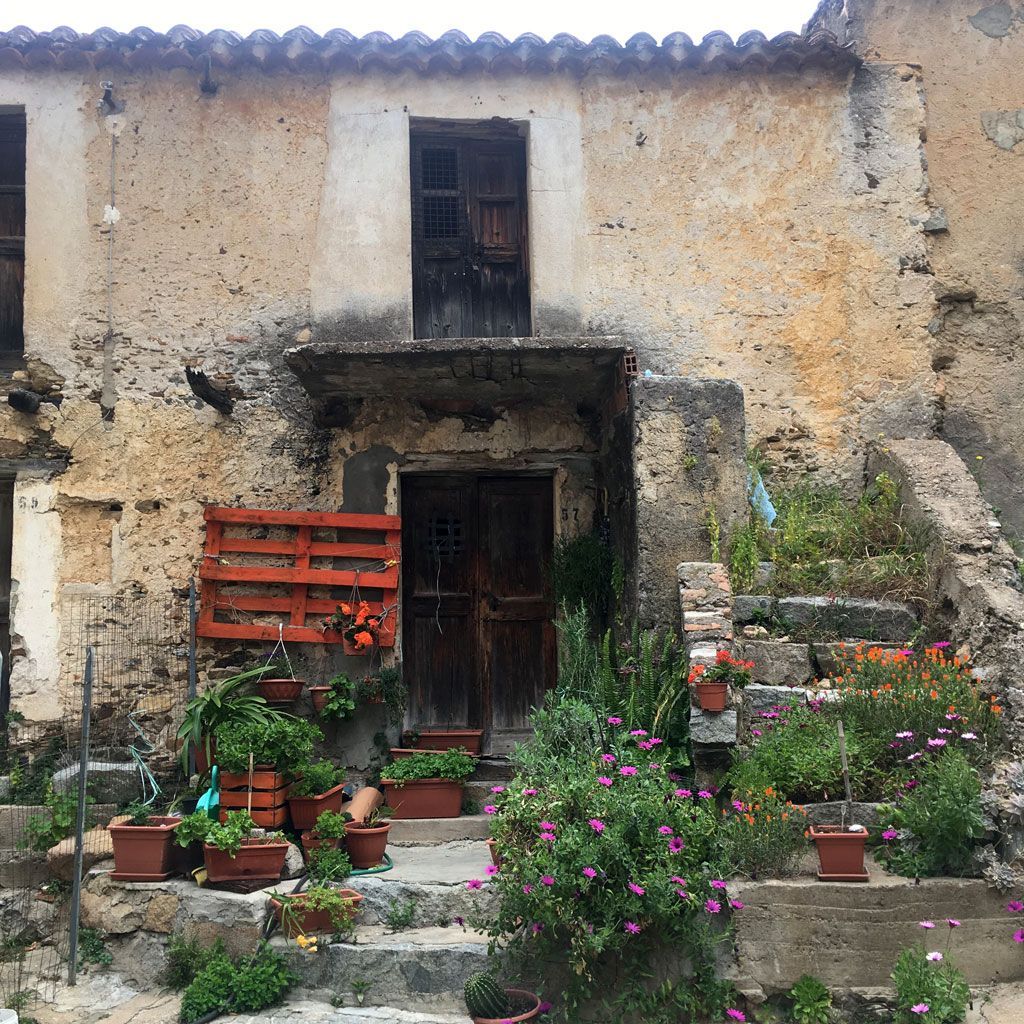 I am accompanied around the small historic center, made up of old houses, and characteristic views. Triei is crossed by a stream that divides it into two parts. The lower part of the center, called Bau Mereu, has more modern houses, with beautiful murals, in particular the one depicting scenes from the Inquisition strikes me. We climb higher up in an area now in ruins, but whose houses were acquired by the Municipality to be restored and converted into a widespread hotel. We descend along a road bordered by a massive wall containing some beautiful historical photos of the town and its characters and customs and then we go up to the other part of the town, called S’Arcu, from which there is a beautiful view of the mountains behind Baunei, and of the valley towards the sea. Here too there are some ancient houses, beautiful murals and some statues depicting the old centenarians, also present here as in all of Ogliastra. 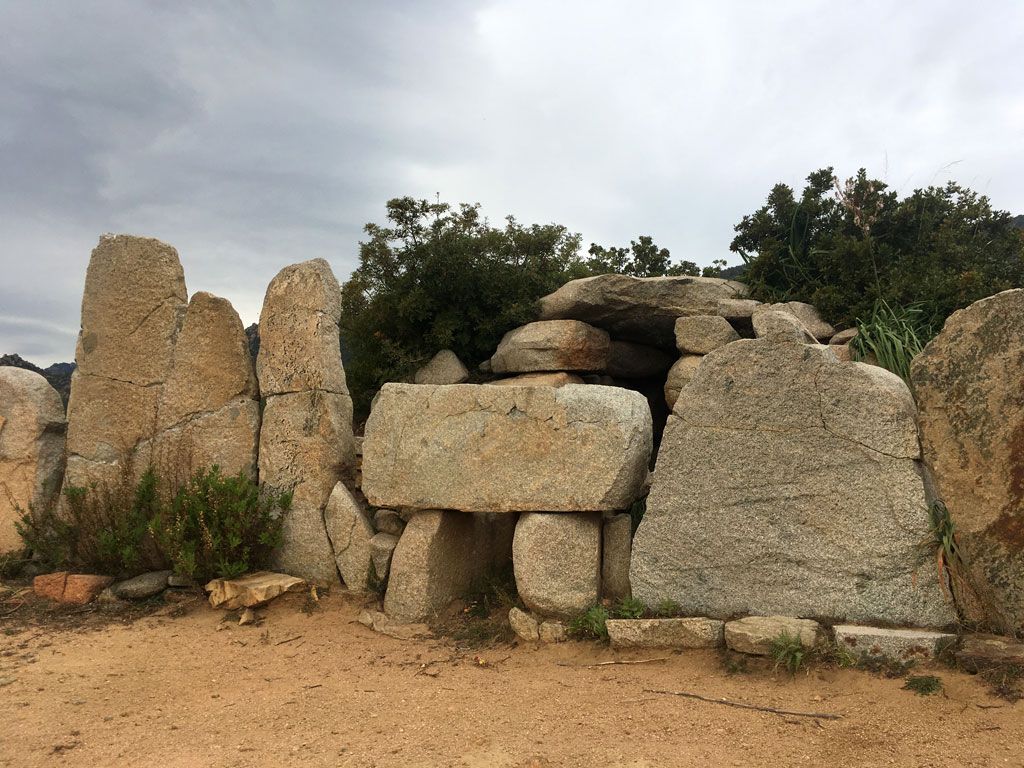 After a delicious lunch at Manuela’s house, with an amazing suckling pig cooked by Manuela’s father Antonello, we head inland and on the mountains behind the village, in the Osono locality. There is a beautiful tomb of the giants, almost complete in its structure and well preserved. The place is truly magical. Here we are joined by Vincenzo, owner of the local Cantina Talavè which produces IGT wines (typical geographical indication) cannonau. Vincenzo tells me of his dream to plant small vineyards on these lands to produce the first “nuragico” wine! When we go down to the nearby Baur Nuraxi nuraghe he tells me that jugs with traces of wine had been found here. After the visit to the nuraghe, of which one side is dangerously flanked by a river that digs and takes away some stone at each flood, Vincenzo offers us good wine at his nearby cellar. 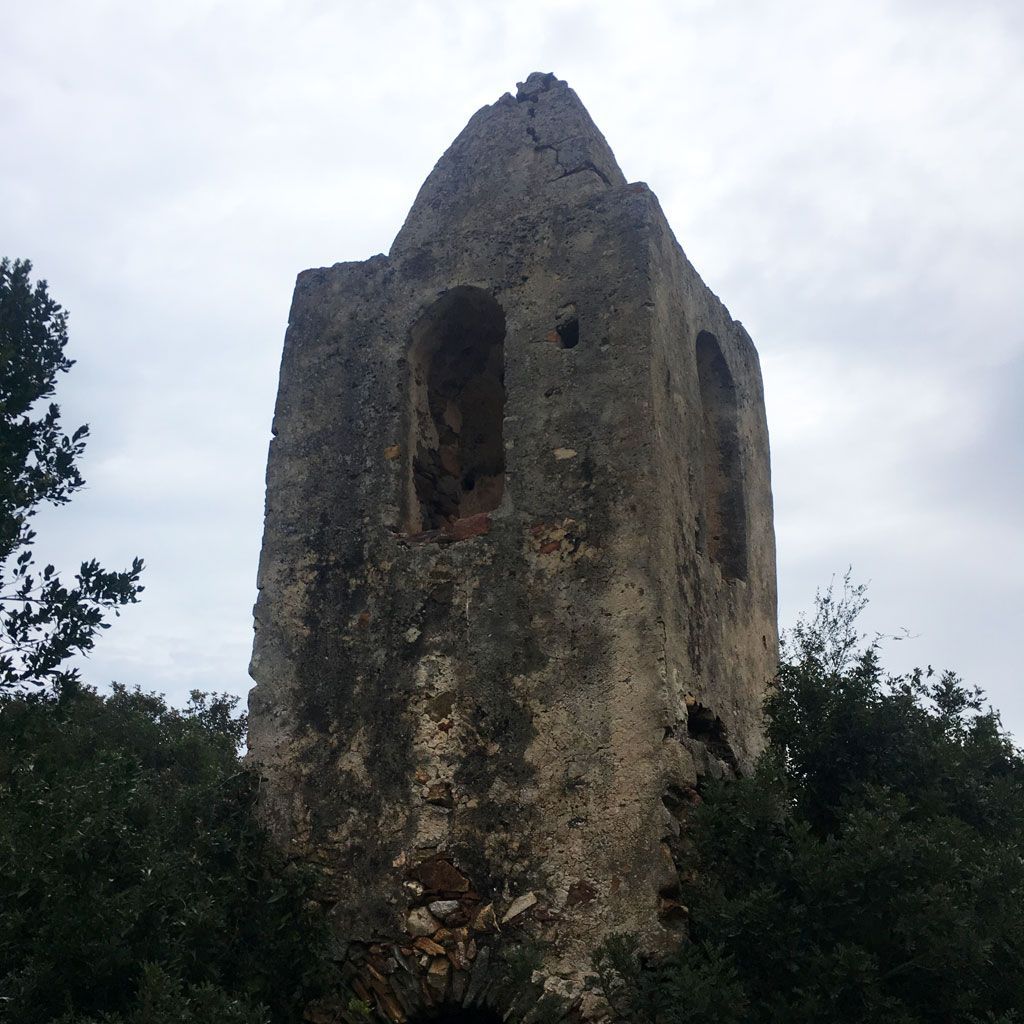 As a last stop we head to Ardali, a hamlet of Triei. This was a large village in ancient times but it was gradually depopulated, losing its importance. Once part of the territory of Baunei and now passed to Triei. The center is small, many houses are in ruins. At one end of the town there is an old bell tower and the remains of the old church around which the cemetery was located. They tell me that up until some time ago they could still find human bones that occasionally came out of the earth. Not far from the center of Ardali was the Genna Olidone mine, from which lead and silver were extracted. Little remains of the structure, but we enter the private land to give it a look, then joined by the land owner who tells us about the activities that took place here, in turn told by his grandfather.

We conclude the evening with a beautiful dinner, joined by Romolo from the Pro Loco, and between one dish and the other we chat about Sardinia, who is most important among Triei and Ardali, the ‘accabadora’ and the difference between Sardinian dialects. 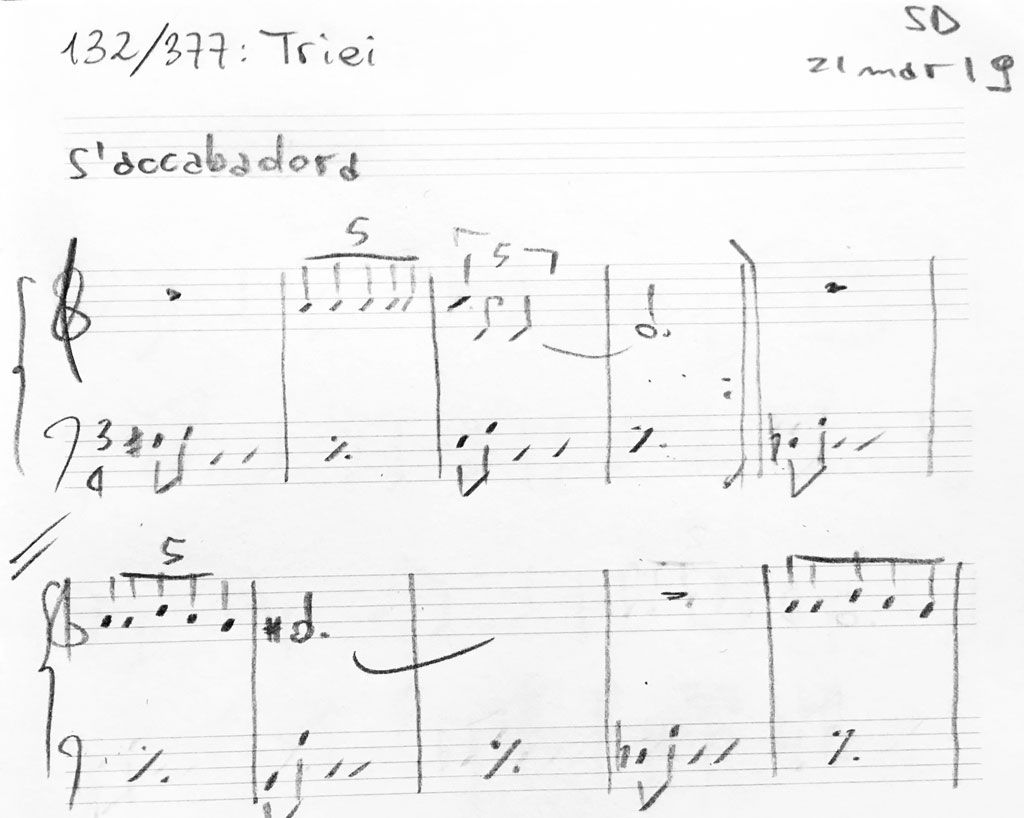 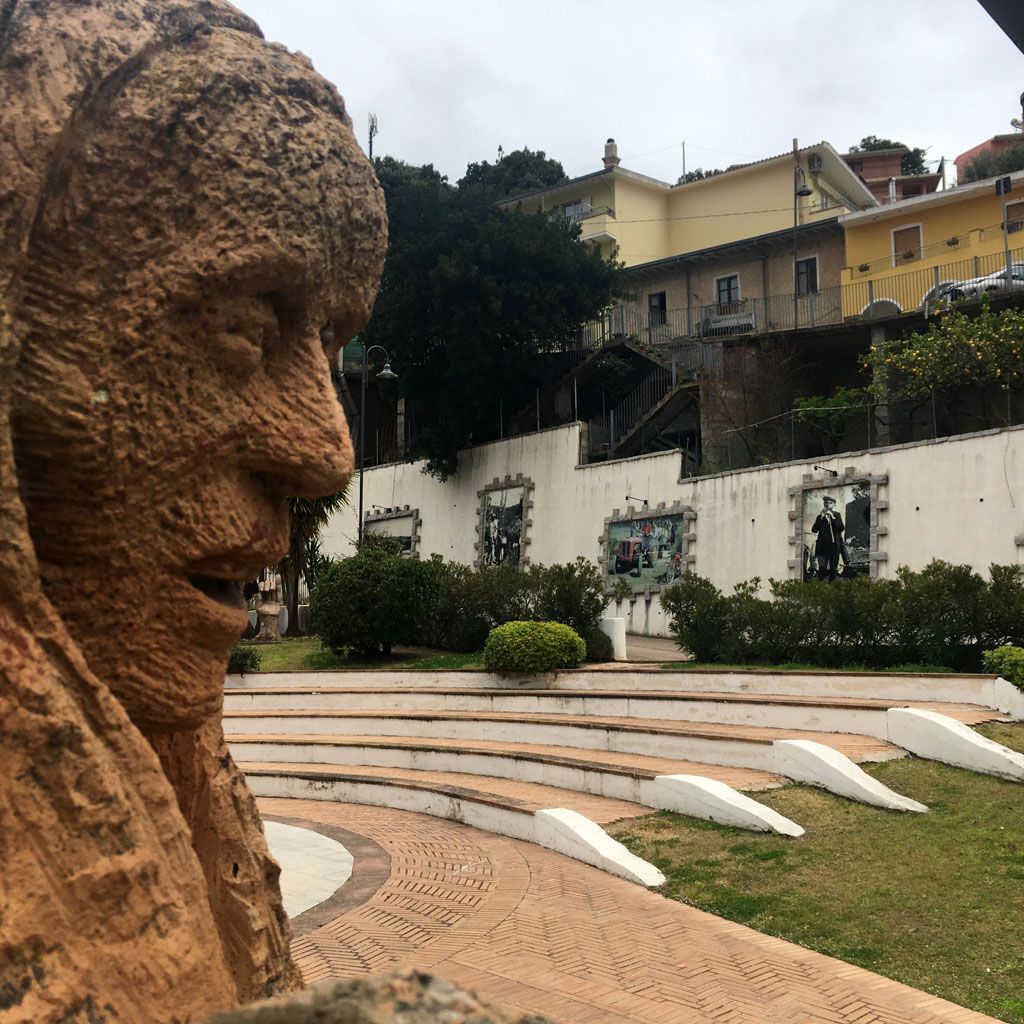 At dinner someone remembers the story of a man from Triei, who was at the seaside with his family in the 1950s. During the day his mother was absent for many hours. On her return, the boy heard her recount that she had to return to the village because there was a very sick old man, who had to be “hit”. From this story this boy has always suspected in this story there was something to do with the Accabadora. There is evidence that in various parts of Sardinia this female figure, dressed in black, put an end to the life of the terminally ill, often to alleviate suffering, by suffocation with a pillow or with a blow on the forehead given with a wooden hammer (there is one preserved in a Gallura museum).

The figure of the ‘accabadora’ has often stimulated the imagination of artists. The writer Michela Murgia gave us a novel, very intense and yet pleasant to read. The director Enrico Pau has made the film L’accabadora, NOT based on Murgia’s novel and NOT set in a village in Sardinia but in Cagliari (PS I haven’t watched it but it is in the ‘watching’ list of the post-journey).

The musician and friend Francesco Morittu wrote a piece of contemporary music for solo guitar, S’Accabadora, with dark and dramatic tones, which received the first prize in the Brescia Chitarra Contemporanea 2008 competition.

And today I contributed to the theme with a little idea about the accabadora on my bass ukulele.