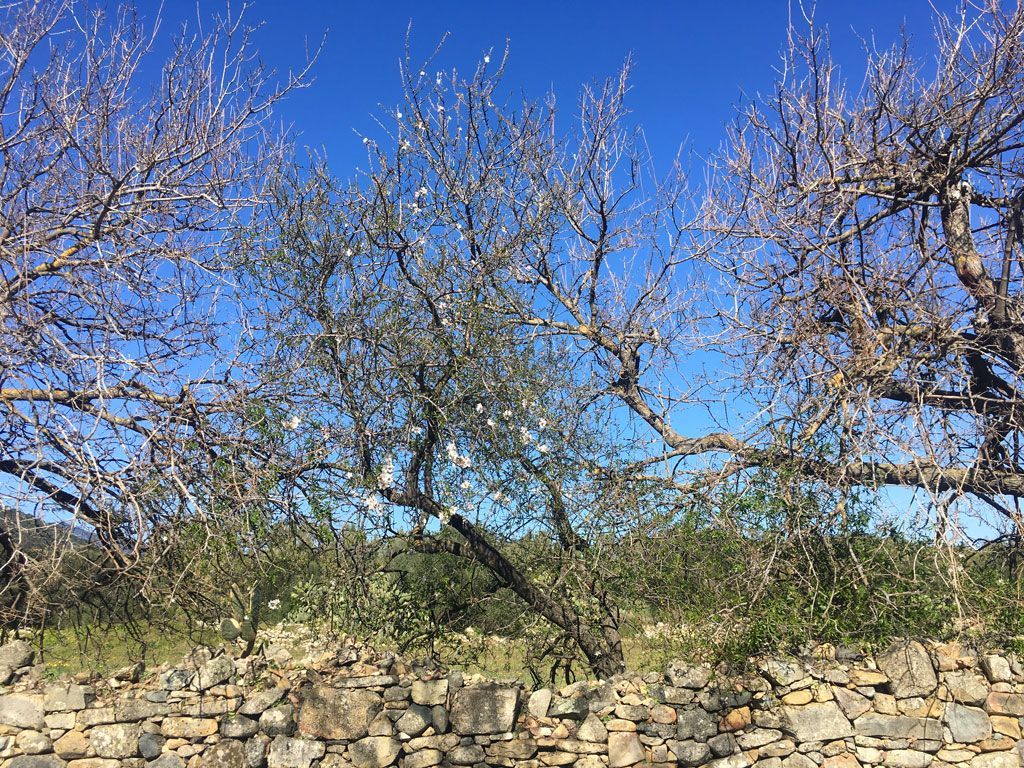 I start from Mariano’s house and, after having taken a coffee with my friend Alberto, my orchestral maestro at the time of the Conservatoire in Cagliari, I take the coastal road to Castiadas that I did not take yesterday to come here. There is a lot of wind, but the view on the coast makes me forget the fatigue of the climbs. Punta Molentis from above, and then the Island of Serpentara and the descent towards Costa Rei. I continue towards Castiadas Centrale (it seems the name of a subway stop), at the foot of the mountains, where I arrive after a long and constant ascent. I still don’t know that today I will still do many miles on my bike! 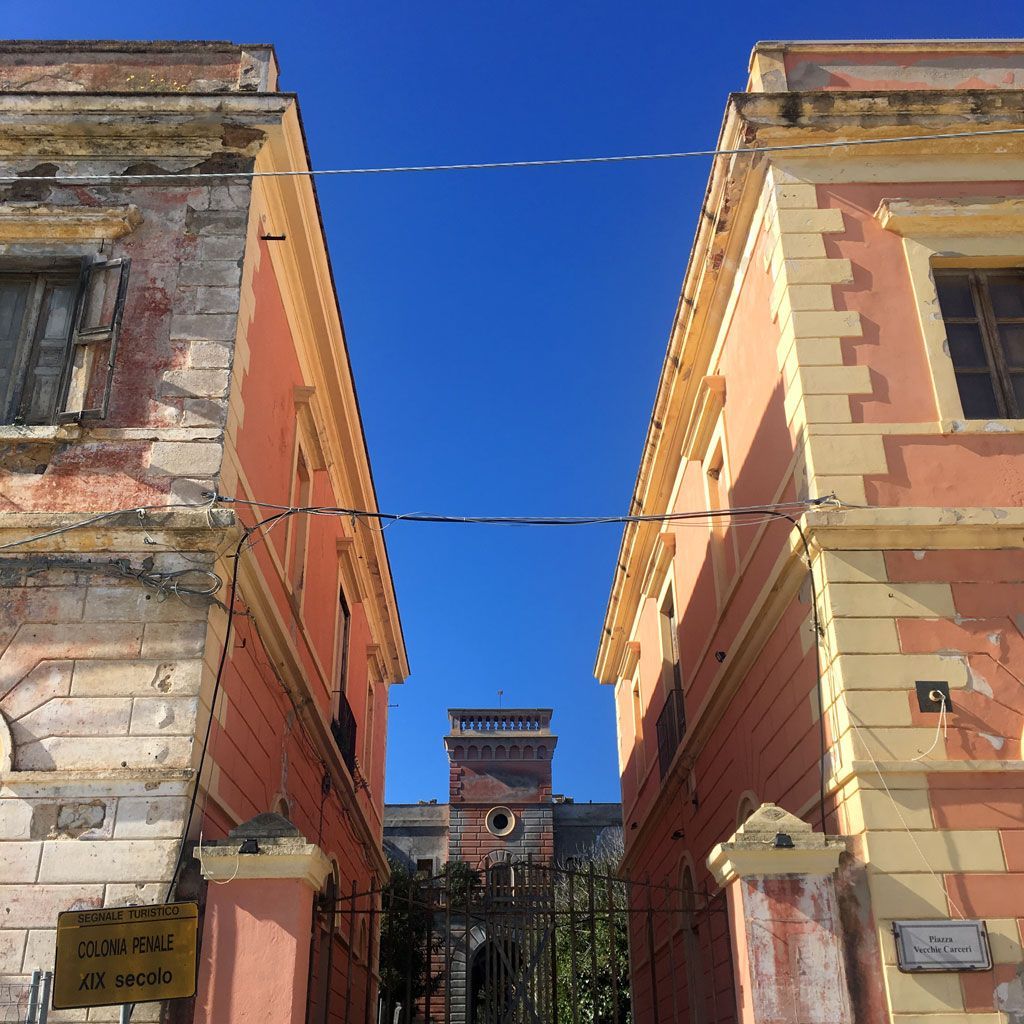 Alessandra and the guide Rafaela are waiting for me. I am told the story of this area, where the main element is the former Penal Colony, now closed since the 50s, partly renovated and containing a museum, now closed. The complex was a self-sufficient village where the prisoners worked on the construction and maintenance of the site and also on the production of all necessary consumer goods. In addition to the central body, around there are houses where families still live today, the church of San Basilide, the patron of the prisoners, the house of the director and the Sa Mandria detachment where now stands an amphitheater for concerts and events. 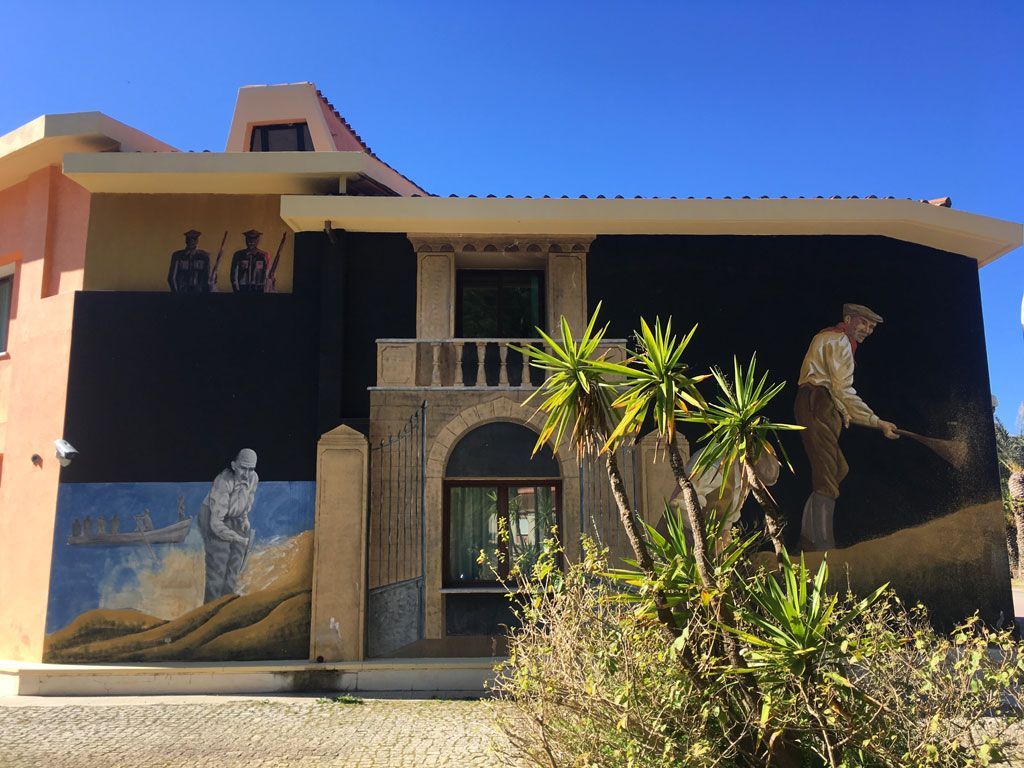 Once the visit to Central is over, I get back on my bike and follow Alessandra’s car towards Olia Speciosa, where the Municipality is located, the schools, surrounded by a beautiful eucalyptus forest, and even the local wine makers. Castiadas was part of the Municipality of Muravera until 1986. It does not have a real village, but is formed by several inhabited centers (in addition to those already mentioned, also the village of the Annunziata, San Pietro and others) and many houses scattered throughout the territory. 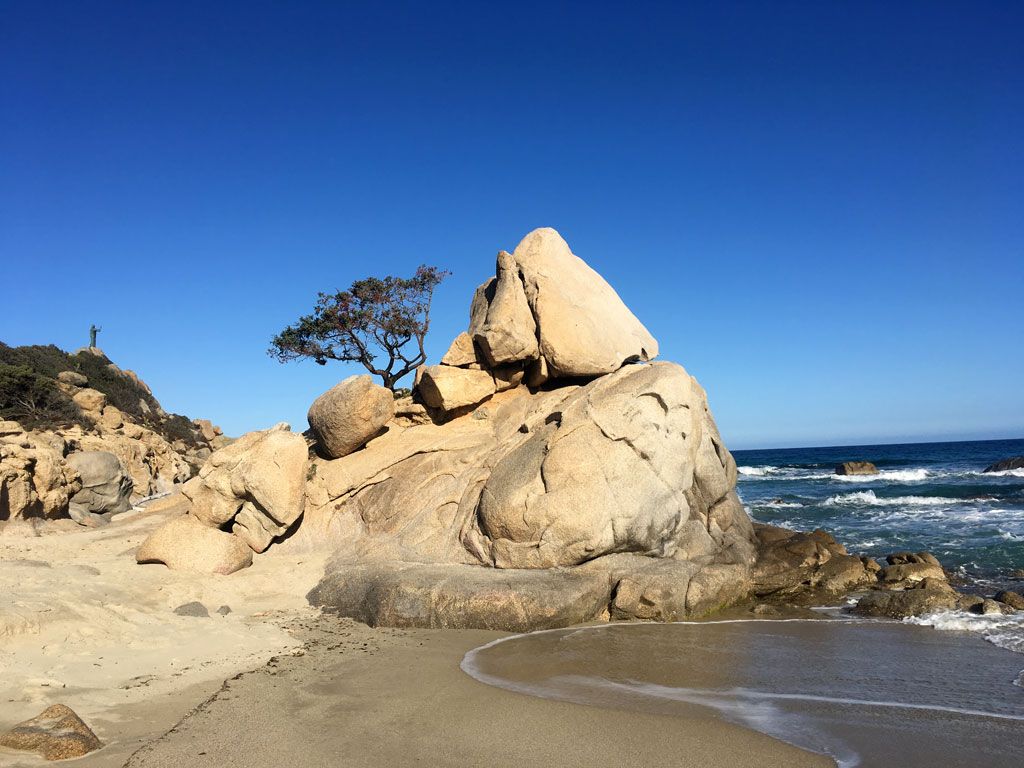 Said goodbye to Rafaela, Alessandra takes me to see the headquarters of the Cultural Association Mariposa, with which she organizes various kinds of events, and then to her house to have lunch with her mate Domenico, and her uncles Lucio and Signora Teresa, who prepared the culurgiones (premonition to the Ogliastra area, where I’m heading!) In the afternoon, we head to the coast. Instead of visiting the famous and beautiful Cala Pira, where I have been in the past, we head to Località Santa Giusta. 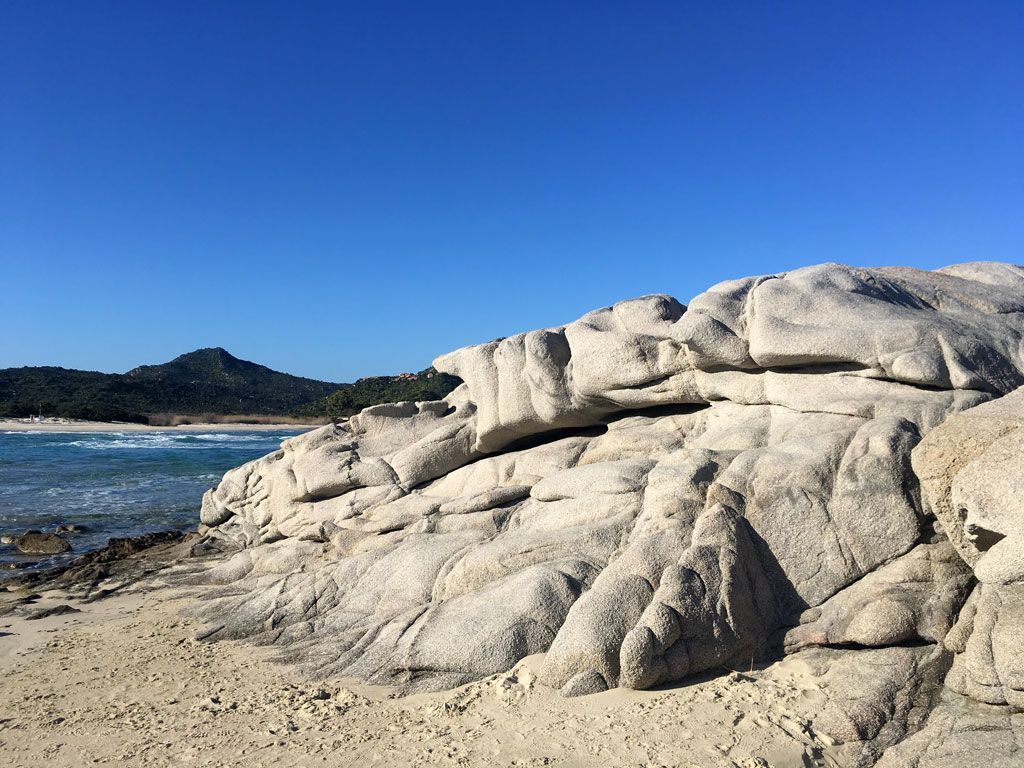 I ask to take me to the Scoglio di Peppino. This place, on the border with the Municipality of Muravera (but here too there is a diatribe in progress on the property of this rock!) beaten in summer, today is deserted … you can not say ‘there is not a dog’ (Italian expression to say ‘there’s no one’), because a dog there is, and I stroke it on the fine white sand! The rounded granite at the end of the tongue of sand is actually beautiful and gently sculpted by windy and sea erosion. Behind the beach the dunes, covered with thick junipers, which we cross to get back to the car. 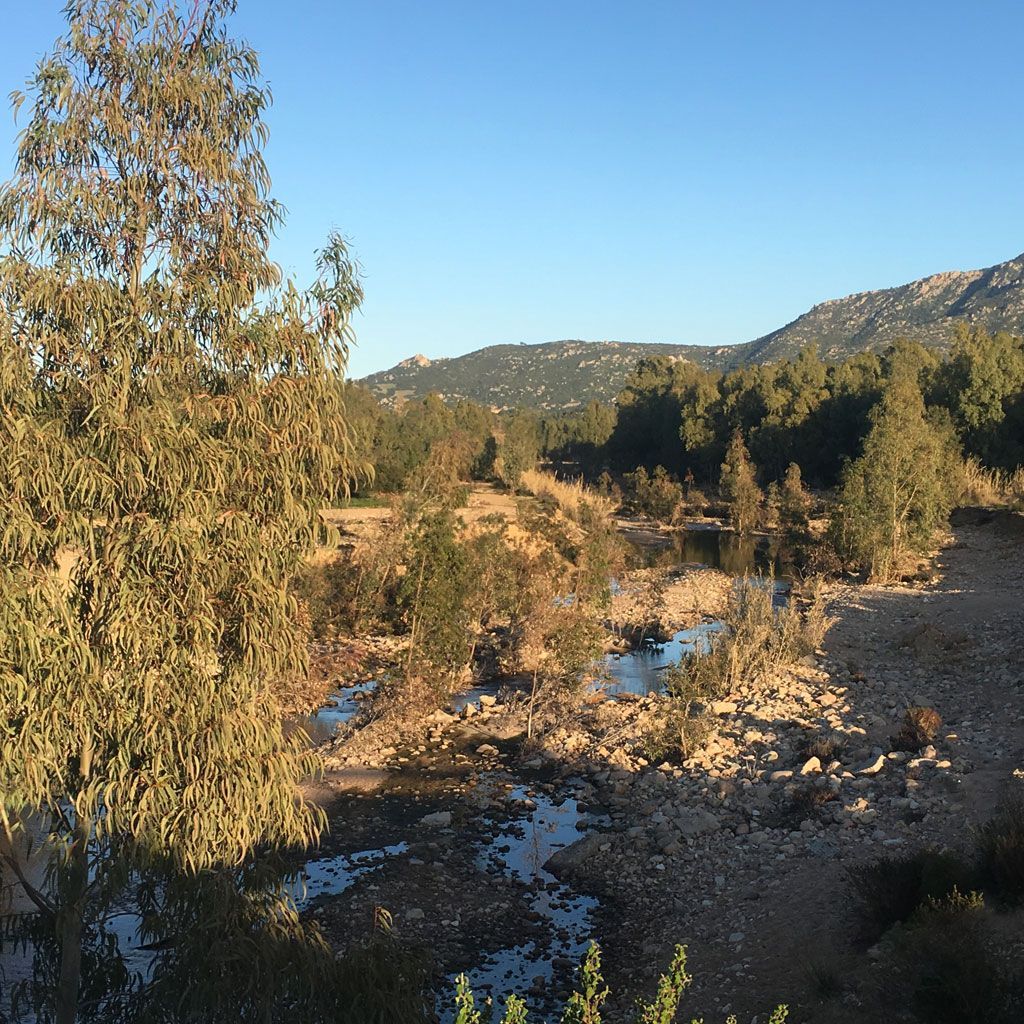 Back to Alessandra’s home, I get back on my bicycle for the third time to travel the kilometers that separate me from the Agriturismo TerreMesu of Sandra and Paolo who will host me. Through the territory of Castiadas, visibly hit by the last October floods, river beds are filled with boulders, roads are partially destroyed by floods, and there is sandy debris everywhere. I enter an internal road that leads to the farm, now already the territory of San Vito, where I will be tomorrow.

Sandra and Paolo welcome me, show me the reality they have built, after choosing to leave the city to live in the countryside, raising animals and cultivating the land. The place is lovely, right under the mountains, and thanks to the presence of a piano I can spend some time composing, inspired by peace and silence all around. 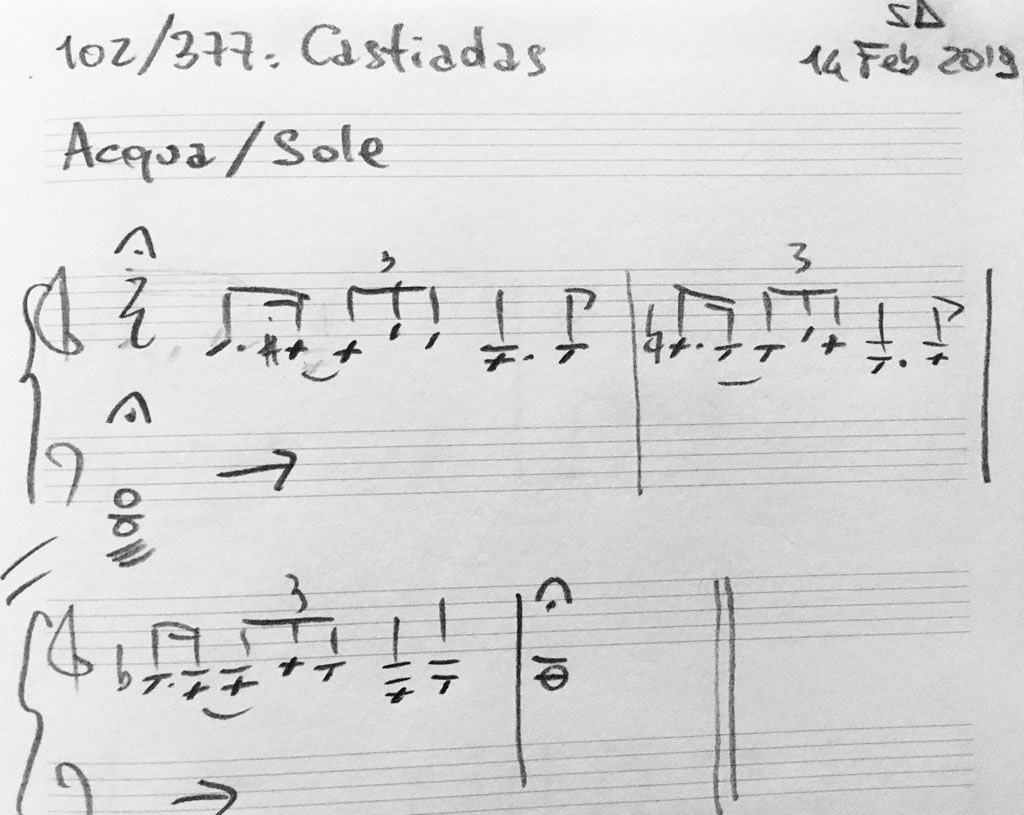 Signora Teresa, origins from the Ogliastra area, lived 12 years in Saronno, before finally returning to live here. When she lived in Lombardy, Teresa always had a recurring dream: she dreamed of living in a village that does not exist, between Villasimius and Castiadas, and that here she did social activities. The dream was always the same, there was a person to whom she had to explain what was the trickle of blood that could be seen flowing, the ritual of killing the Sardinian suckling pig. She had also to explain to the same person why the children all had big stomachs, like the African ones, because they were all afflicted by a serious illness.

Back in Castiadas, Teresa started working on social services, and realised that her dream was a reference to the land of origin and to her role in society. And yet, she discovers a difficult reality here too. She still remembers the shock when, back, she had found all the houses closed by gates that did not exist before “once we were always out of the house talking to neighbors, now everyone is at home and that sense of community has disappeared” … it must all be the gates’ fault!